This report was prepared by Jimmy Boegle, Mari Herreras and Jim Nintzel, with additional reporting from Claire Conrad, Megan Neighbor and Hank Stephenson.
The payday-loan industry may be on its way out of business in Arizona. Gay marriage is even more illegal in the state, and once again, voters have rejected the idea of giving lawmakers a raise.

With 99.1 percent of precincts reporting, according to the Arizona Secretary of State's Office, here are the latest results.

The payday-loan industry suffered a stunning defeat after 59.5 percent of voters rejected Proposition 200, the Payday Loan Reform Act. Prop 200, which was funded with more than $14 million from the payday-loan industry, would have allowed the industry to continue to operate in the state past 2010, the year in which the law that allowed them to set up shop will expire.

Business owners did not get a break from voters after the stunning defeat of Proposition 202. The Stop Illegal Hiring Act, supported by a variety of business interests, would have granted Arizona companies additional defenses if caught with illegal workers on their payroll. However, with the defeat—59.1 percent of voters were saying no—the state's employer-sanctions law, said by many to be the toughest in the nation, will remain on the books.

Voters also ensured that they will still be able to increase taxes at the ballot box by overwhelmingly rejecting Proposition 105, aka Majority Rules, which would have required that any statewide initiative that hiked taxes or fees be approved by a majority of all registered voters, not just the ones who cast ballots in the election. A whopping 65.7 percent of voters rejected the measure.

"Prop 105 was designed to not allow any proposition to pass," he said.

Gay marriage became even more illegal in Arizona after 56.5 percent of the voters supported Proposition 102, which will amend the Arizona Constitution to limit marriage to being between only one man and one woman. Arizonans rejected a broader law that would have also banned civil unions and domestic partnerships by a narrow margin two years ago.

Beth Walkup, the wife of the mayor, and many other Southern Arizona politicos spoke out against the anti-gay-marriage measure, to no avail.

"She campaigned on the basis that voters already said no," Walkup said about his wife's efforts against Prop 102.

Outgoing Senate President Tim Bee, who put what would become Prop 102 before the state Senate in the waning hours of this year's legislative session after waffling on the matter for months, defended the initiative.

"I was told by my constituents that it was their No. 1 issue that they wanted me to address, and I did. I brought it up for them. … Clearly, it's different from what was brought up two years ago (and that's why it passed)."

State lawmakers will continue to be a bargain for taxpayers after 64.5 percent of voters rejected Proposition 300, which would have increased annual legislative salaries from $24,000 to $30,000.

Proposition 101, aka the Freedom of Choice in Health Care Act, remained too close to call as of Wednesday morning, when voters were rejecting it by just more than 2,100 votes. If it were to make up the difference and somehow pass, Prop 101 would amend the state Constitution to ban the state from interfering with health-insurance options.

Arizonans will never be required to pay a sales tax on the purchase of a home after voters resoundingly approved Proposition 100, aka Protect Our Homes, which was placed on the ballot by the Arizona Association of Realtors to block the state from charging a real-estate transfer tax, a revenue mechanism in some states. Some 76.9 percent of voters added this amendment to the state Constitution.

However, buyers of new homes will not be getting a longer guarantee on their houses after 77.9 percent of voters rejected Proposition 201. Homebuilders successfully argued that the proposition would increase lawsuits and raise home prices.

Voters in the Tucson Unified School District were fairly split on the idea of allowing the district to raise property taxes to spend more money on programs—but Wednesday morning, Proposition 403 appeared to be headed for defeat. With 97.2 percent of TUSD precincts reporting, Prop 403 had 48.36 percent of the vote (66,797 votes), while no had 51.64 percent (71,337 votes).

Also close but apparently winding up in the "win" column was Prop 401, which will create new dietary and care restrictions for dogs within the city limits of South Tucson. The South Tucson Dog Protection Initiative was aimed at improving the lives of dogs that race at Tucson Greyhound Park; yes had 402 votes, and no had 373 with all South Tucson precincts counted.

RPG and Bombs Found After Teen Killed on North Side 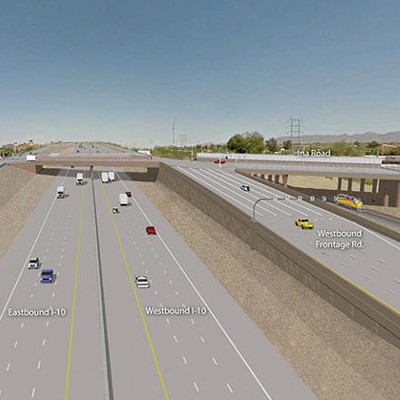