Which is better: 'Paranormal Activity 4,' or grainy convenience-store-security footage?

While watching Paranormal Activity 4, the latest in a series of bland found-footage films trying to squeeze scares out of home-security and cell-phone videos, I compiled a list in my head to keep from falling asleep.

I listed the reasons why I would rather watch the grainy, live black-and-white security footage on the monitor behind the counter at a convenience store than watch the wannabe-scary security video in Paranormal Activity 4.

No. 1: The convenience-store video doesn't feature an actress (like Kathryn Newton in PA4) who looks like she is always going to laugh while delivering a line, even if that line requires her to be serious or scared out of her fancy pajama bottoms.

No. 2: I strike a rather impressive figure on black-and-white security video while waiting in line to buy my Altoids. I really do.

No. 3: It's fun to wonder whether the guy standing next to me in the convenience-store video plans to use his Ben and Jerry's Cherry Garcia as a snack or as a weapon. Have you ever been hit in the head by a pint of Ben and Jerry's ice cream? That shit is like a mini-cinder block. A sweet, awesome cinder block that is tasty in many glorious ways, but a cinder block all the same.

No. 4: I wonder whether the angry Russian guy in line will start a fight with one of the attendants about cigarettes, followed by the other ex-con male attendant picking a physical fight with the Russian guy, with me stuck in the middle trying to keep them apart, thus creating an action scene better than anything in Paranormal Activity 4. (This actually happened to me one Christmas Eve at a convenience store. It was awesome!)

In my humble opinion, the Paranormal Activity franchise peaked in the final two minutes of the first installment. That would be when a rather boring movie about bedsheets moving by themselves actually became recommendable based on a startling ending that left me legitimately shaken and wanting to hold someone's—anyone's—hand.

Since that moment, the series has been one scene after another of rooms where something—a sound, a shadowy figure strolling through, a basketball coming down the stairs by itself—is going to happen. Or sometimes it doesn't happen, and the director fakes you out. (The directors of this installment are big fans of the open-refrigerator-door fake-out.)

This is a film that wants you to think the "Front Door Open" voice on some people's home-security systems is creepy. While that voice is bland and sad, it's far from creepy, yet we hear it MANY TIMES in Paranormal Activity 4.

The film also fails in the scary-child department. The movie I reviewed last week, Sinister, had a bunch of decent scary kids in it. I give it a B+ for scary kids, and place it in a league with The Shining and Pet Sematary when it comes to spooky children. The kids in this movie are supposed to be creepy and perhaps possessed by demons, but they just look depressed, as if somebody took their video games and juice boxes away.

I have officially graduated from dreading the next horrid Saw flick to dreading the next Paranormal Activity flick every October. Halloween used to be fun at the movies, with stories about werewolves and gargoyles and masked serial killers and whatnot. Now it's about watching a couple of jerky kids Skype each other.

Paranormal Activity 4 is not showing in any theaters in the area. 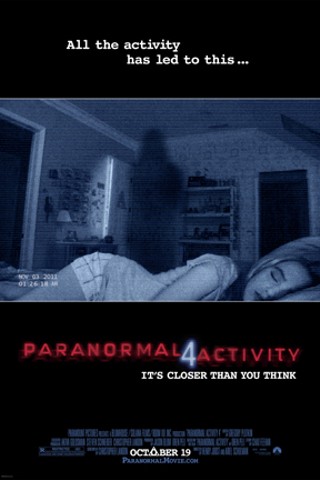