After a canceled schedule, Market on the Move bounces back, but not everyone is thrilled

The Tucson and Sierra Vista areas are scheduled to have Market on the Move events on Nov. 2, the first since the program was temporarily halted in August.

For a $10 donation, supporters receive up to 60 pounds of produce that has been "rescued" from being sent to landfills because it has blemishes or doesn't fit the size desired by supermarkets. But not all organizations that feed the hungry are thrilled by the return of the program. The CEO of the Community Food Bank of Southern Arizona, for instance, says the way that MOM operates is "unethical."

Market on the Move, or MOM, was established in late 2010. The intent of the MOM program is for people to share the produce with their families, friends, relatives, neighbors and anyone they know who may be in need.

By the end of the last growing season, in May 2013, there were more than 50 MOM distribution sites and 90 million pounds of produce had been rescued and redistributed in Arizona.

But in early August, the Phoenix-based nonprofit 3000 Club International, which sponsors MOM, announced that the remainder of its produce distribution schedule, from mid-August through October, was being canceled in both Tucson and Phoenix. The organization's website said "these changes have come about due to the fact that a major produce donor that we have been counting on has had financial challenges and is therefore unable to supply produce during this period of time."

Much of the produce MOM distributes comes through Nogales, Ariz., after originating in Mexico, and some of it comes from other parts of Arizona, such as Willcox.

"However, the past two summers we were able to get some donations from Willcox," says Ethel Luzario, co-founder and president/CEO of the 3000 Club. "Unfortunately, that produce donor had some difficulties and they were not able to plant. So the produce stopped coming in around the summer and we had to cancel the rest of the summer distribution."

But now Market on the Move is back, and expanding. Luzario expects to average three to four produce sales every Saturday.

Distributing the produce can be a hassle. Luzario says produce that comes from Mexico is transported to various produce brokers in Nogales before it is distributed to supermarkets and food warehouses throughout the United States and Canada. But if the produce is not the right size or shape, it usually ends up in a landfill.

Market on the Move collects the produce that brokers "are not able to push," says Luzario. "We're rescuing not from the supermarket; we're rescuing from the big warehouses.

"We told them, 'Don't throw it away," Luzario says. "We'll accept anything that's 80 percent or better, meaning that if you have around 100 tomatoes, 20 percent of them might be not suitable. Sometimes we are actually lucky that 100 percent are perfect."

But is Market on the Move competing with food banks?

"No we're not, because we're running a different program," says Luzario. "With the food bank in Tucson, they are there to service the direct recipient, meaning that they will check the income, the eligibility before they can actually give you the products. With us, it's not intended for the direct recipient. It's intended for the people who are able to make that donation, and have them identify who the needy in the community are and get it to those people."

"We rescue close to 30 million pounds of produce. What we distribute in Markets on the Move is almost 10 million pounds, and the rest actually goes to the different food banks," says Luzario.

But not in Tucson.

"We don't have anything to do with them," says Bill Carnegie, CEO of the Community Food Bank of Southern Arizona, which has been around since 1976. Carnegie says the rescued produce that Market on the Move gets is "exactly the same" produce that the food bank goes after, noting "it competes with what we try to do.

"Here's the thing: They're giving the companies a tax deduction certificate, and then they're turning around and selling the product to individuals. So in our eyes, as an organization, it is an unethical practice," Carnegie says.

The 3000 Club, founded in 2008, has had to deal with questions about its practices in the past. A 2009 Arizona Republic investigation linked the questionable financial activities of the Phoenix-based Don Stewart televangelism ministry to 22 charities, including 3000 Club partner Feed My Hungry Children as well as the Stewart-funded Borderlands Food Bank in Nogales.

Luzario responds that, "Our organization was not involved in the Don Stewart controversy, not at all."

As for the $10 donation for 60 pounds of rescued produce, the 3000 Club's website says that 100 percent of the donations "is used by the program in rescuing, distributing and transporting the produce, while the employees who work directly in the food rescue program are paid by the program's budget."

"It is a donation," says Luzario. "We are not 'selling' the produce. We ask for a donation of $10 because the idea is they're helping us bring the produce and (giving it) to the people they believe that are in need."

And if a needy family can't afford a $10 donation, Luzario says somebody at Market on the Move events "is always stepping up for them to get the produce. Nobody's being turned away.

"We're not like the food bank, whereby in order to give something to the people, we check their income and eligibility. We don't do that and it's not our intention to be a food bank."

But another difference Carnegie notes is that the Community Food Bank is "certified in the highest food safety standards that you can have as an organization.

"We're part of Feeding America, which has exceptionally high standards for the receipt and storage and distribution of products." Market on the Move, he says, is "not held to the same standard that we are."

Market on the Move's relaunch in the Tucson area will Saturday, Nov. 2, at Emmanuel Baptist Church, Pima Community College, Saguaro Canyon Church, St. Joseph's Catholic Church, and at Fort Huachuca. The next day, the 2013 Tucson Crop Hunger Walk to benefit anti-hunger programs will start at 2 p.m. at First United Methodist Church. The walk, sponsored by Church World Service in some 2,000 communities nationwide, earmarks about 25 percent of funds raised locally for the Community Food Bank of Southern Arizona.

Carnegie says every little bit helps because the number of people the food bank serves continues to grow. "We're up 6 percent over last year, and last year we were 9 percent above the year before that," Carnegie says. "The economy is still rough out there for a lot of people."

The timing is bittersweet for Carnegie, who has been the food bank's CEO for eight years, but has announced he will leave the job on Dec. 31. After 22 years of "doing food banking," Carnegie says he's not sure what he'll be doing. 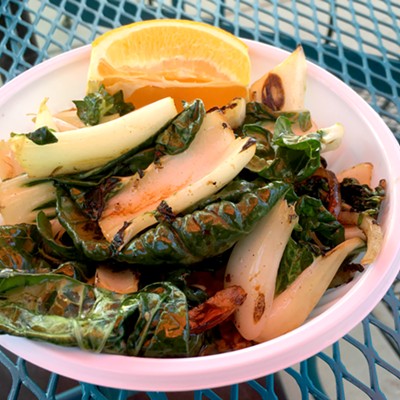 Celebrate Tomatoes and Basil This Weekend at the Heirloom Farmers Market