At the Prime Leaf, the 420 train is leaving the station, and if you're not on it, it's leaving you behind.

"The direction that we're headed, the speed we're going, it's not going to be whether or not the industry is going to create these opportunities for you, it's whether you can keep up professionally," said manager Brian Warde.

The Prime Leaf recently opened at their new location at 4220 E. Speedway Blvd., and there's something just a bit different about this dispensary, starting with the layout. 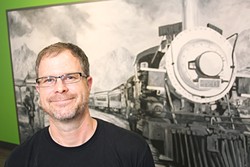 Warde never found any other dispensaries terribly inviting. Many dispensaries have a waiting room and a check-in counter up front, with few windows to the outside world.

"They weren't just open," Warde said. "If they were, there was always security right at the front door."

With glass walls making up most of the frontal facade, passersby can see the front-end operation, which looks like your typical smoke shop. In contrast to most dispensaries, Prime Leaf isn't coy about its identity.

The sentiment is decorated on the walls of the new store with two murals by local artist Joe Pagac. One depicts the historic Tucson train, now seen at Maynards and before that, in its previous home at Himmel Park, departing the station with the familiar sight of the Catalina Mountains in the background.

Another shows a pioneer next to his covered wagon in front of a characteristic Arizona mesa.

"Everybody knows where they wanna go, but sometimes you forget you still gotta get to the top of the mountain," Warde said.

Another way Prime Leaf is combatting marijuana stigmatization is by working with local organizations to give back to the community.

Employees help choose what organizations to help out, which include the Southern Arizona AIDS Foundation, Tucson Symphony Orchestra and the Loft. The involvement is part of the industry, Warde said.

"One of the keys to being part of the industry is to lay those roots," he said. "I had tons of conversations. Every table that I sat at, every school function I went to, everything we were invited to, I had to have this conversation about cannabis—what it is, what part it plays—so I really felt like there was an opportunity to have that on a greater scale." 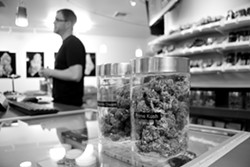 Hector Acuna
The Prime Leaf carries a wide range of MMJ products, from flowers to edibles

A big part of success for many dispensaries is vertical integration, meaning a company controls the supply chain of their product with their own grow sites. The Prime Leaf is no different.

Their warehouse grow operation has tripled since Warde joined the company in 2014. In contrast to outdoor grow operations, Warde said one of the challenges is maintaining environmental controls, especially during the summer.

Even with the rapid growth of the grow, Prime Leaf still purchases 60 to 70 percent of their product at wholesale price, including from Tucson dispensary Green Halo.

Prime Leaf also tests all their products for pesticides, mold and potency.

From the storefront to their community impact, the Prime Leaf takes the emergence of marijuana in society to heart, and hopes to be a part of shaping the industry in the future.

"There's places that cannabis has to get better—child-proofing, tampering—there's lots of things we can do better as an industry," Warde said. "For our goal that would be, as we become vertical, make sure all those things are in place—make sure we're putting those things behind us."