Pride Through the Ages

When Robert Bell and a man he was dating in the early '70s broke up, the man threatened to call Bell's boss and out him as gay, in hopes of getting him fired. When Roger Osgood went to his first gay bar in the '70s at age 28, he was absolutely petrified but knew it was the only place he could meet people who were like him.

When Lavina Tomer came out as a lesbian to her family in the '70s, she was just relieved they didn't kick her out of the family—never mind that they made it clear they didn't want to hear about her romantic or social life.

All of them agree that society has come a long way in its treatment of the LGBTQ+ community. But as one aspect of their identities has started to become more accepted, they've gained another trait that, in some ways, has pushed them back toward the outskirts.

"Society in general is very youth-oriented. We see aging as something we have to tolerate and not part of being human," says Tomer, chair of the Southern Arizona Senior Pride Steering Committee. "When we talk about intersectionality, we don't put age in there."

Consider the scene on the front lines of many pride parades, where things like racial diversity, and even inclusion of the transgender community, have increased over the years. But at a celebration of sexuality, there's an undeniable element of the sexy, and youth, along with it. Everyone though, LGBTQ+ or otherwise, was young once. And many of today's senior citizens faced—and fought back against—discrimination against the community that was once even worse.

"We're the generation that opened the doors for LGBTQ+ equality," says Bell, another member of the Southern Arizona Senior Pride Steering Committee. "We can't close them on ourselves now."

Southern Arizona Senior Pride aims to celebrate and unite older LGBTQ+ adults throughout Southern Arizona through events ranging from poetry readings and book clubs to potlucks and support groups. They collaborate with organizations like the Pima Council on Aging and are members of the ELDER Alliance, a coalition of groups in Pima County who work to serve the area's senior population.

As seniors face issues like immobility, the need to move into assisted living and the death of spouses, many become isolated, but the issue can be even more severe for LGBTQ+ seniors. For example, according to a report by Services and Advocacy for GLBT Seniors (SAGE), a national organization that advocates and provides services to LGBTQ+ elders, about 80 percent of long-term care in the United States is provided by family members. But LGBTQ+ seniors, who are about twice as likely to be single and three times as likely to be childless as their heterosexual peers, are only half as likely to have close relatives to rely on for help.

"What makes [isolation] compounded in LGBTQ+ people, especially the generation who are senior citizens right now, is that we've lived more hidden lives," Tomer says. "Some of us are estranged from our families and churches. Other groups we used to be a part of, we're not a part of anymore. We're not only isolated from society, but we're isolated from our own communities."

To combat this problem in particular, Tomer and Steering Committee member Kay Smith co-founded Community Cares, a program in which LGBTQ+ volunteers provide friendly visits and calls to homebound LGBTQ+ people 55 and older and those with disabilities of any age. Founded in October 2017, Community Cares aims to bring comfort to participants, who can be secure that the LGBTQ+ volunteers are not there to pass judgment.

"The woman that I visited was 90," Tomer says. "She had opened a lesbian bar in Seattle and been a part of a motorcycle club and a bowling league and a baseball team. She had a daughter. She was never political—she was just herself. Though, in minority communities, just being authentic is a political act. She really appreciated being able to share her experience as a lesbian. She didn't have to edit anything."

Tomer, an outspoken leader whose sense of determination mixes nicely with her sense of humor (years ago, she told a persistently nosy acupuncturist inquiring about her birth control methods that not needing birth control was one of the advantages of being a lesbian), hardly seems one to let herself grow isolated, ability to qualify for a discount at the Desert Museum aside.

In fact, many of the people involved in Southern Arizona Senior Pride are active, vital members of the community, and, from the outside looking in, it's easy to wonder how acquainted these vibrant activists, who lobbied and volunteered and rallied their way all through one millennium and into the next, really are with isolation. Tomer said she counts herself fortunate for having a strong group of friends and a relatively supportive family, but that she still knows the feeling well.

"There are different kinds of isolation," she says. "How I describe the isolation that I experience is there's always this veil. When you're out in this larger society, you can't make assumptions like straight people can. Can I ask for what I really need? Can I be authentic?"

Bell, the man whose ex-partner threatened to out him to his boss, notes that it wasn't until 1973 that "homosexuality" was removed from the Diagnostic and Statistical Manual of Mental Disorders. Though he's happily and openly married to a man, he knows people who have been together for decades who still keep separate bedrooms because they feel they have to keep up a front for society.

"All the messages I got growing up were negative," he explains. "You become ashamed, and you don't tell anybody. You feel like you're going to lose your family, your friends, your job... there's safety in hiding."

Michael Paluda, a recipient of visits through Community Cares, also knows isolation well. At only 57, Paluda is new to the "senior" classification—he lives in an assisted living facility because his multiple sclerosis has left him in a wheelchair. He's also fairly new to the LGBTQ+ community, or at least to openly identifying as a part of it—he didn't fully come to the conclusion he was gay until he was 50, and he attended Pride for the first time last year.

An accepting, supportive community has been crucial for Paluda, not because he couldn't find that kindness in other people throughout his life, but because he couldn't find that kindness within himself. Paluda spent decades as a fundamentalist Christian, in denial about his sexual orientation because he thought being gay was a sin. He wasn't afraid to tell others that either, including his sister, who has been in a relationship with her now-wife for more than 30 years.

"I had told her many years ago 'You know, dear, honey, you're going to hell,'" he admits, sheepishly. "It was so horrible."

Going from condemning LGBTQ+ family members with eternal damnation to attending his first Pride parade was a huge shift. Growing a little older and losing much of his mobility along the way made things even trickier. But on Sunday afternoons, he can always look forward to spending an hour or so with Community Cares volunteer Stephen Higley. 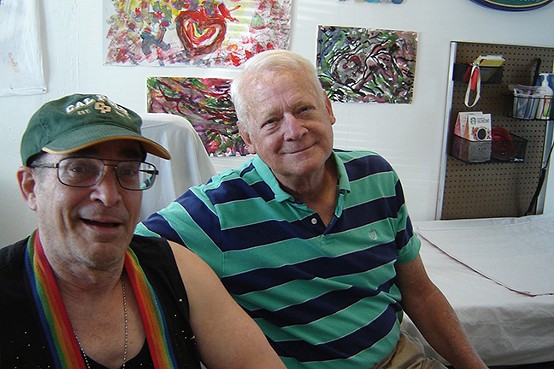 "We do things that gay guys do when they're together," Higley says. "We talk about George Clooney and other male movie stars and giggle about those kinds of things and look at the internet together."

Higley, a retired professor who likes to emphasize that he has a full head of blonde hair and that he's not-quite-70, is active in the community and active physically, but his weekly visits with Paluda have become just as much a part of his life as they are of Paluda's. Regardless of how many friends you have or your personal background, it seems there's something timelessly delicious about lounging around with a friend and gushing over cute celebrities.

Southern Arizona Senior Pride's mission, in some ways, aims to create that same sense of timelessness in the LGBTQ+ community. As Smith, co-coordinator of Community Cares, points out, aging is something all LGBTQ+ people will face eventually, so it's worth the younger generation considering what sort of issues they might face down the line and what they might be able to help with now.

However, Tomer says integration into the larger LGBTQ+ community does not equal elimination for a special subcommunity of LGBTQ+ seniors. The shared history that the community's seniors have faced—from having a part of who they are classified as a mental disorder to same-sex marriage not being legal for most of their lives—will always be a part of their unique history

And though people like Smith are inspired by the sight of young LGBTQ+ people walking across college campuses holding hands, young same-sex couples getting married and even, in her view, young people at-large becoming more open-minded about sexual orientation, they believe there is still progress to be made and that each generation will have their own story to tell.

"I'm so hopeful for all of this to continue in the right direction," Smith says. "It's exciting times of acceptance and caring about each other and honoring whatever love is in people's hearts."

Perhaps when the teens and twenty-somethings of today become the seniors of tomorrow, they'll be able to look back on the issues faced by the LGBTQ+ community today—from violence to discriminatory laws—as battles they fought so the next generation won't have to. And all generations will be able to enjoy living in a present where that's no longer the case.

"We're working diligently for sustainability," Tomer says. "We'd like to have a Senior Pride for generations coming along after us. People of all ages are welcome to join—pride is ageless."

For more information about volunteering for or receiving services from the Community Cares program, call 351-2724 or email sasp.ccp@gmail.com. A volunteer orientation is scheduled from 1 to 3:30 p.m. on Saturday, Oct. 20, at Cornerstone Fellowship, 2902 N. Geronimo Ave. For more information about Southern Arizona Senior Pride in general, visit soazseniorpride.org or soazseniorpride on Facebook.