Mike Judge's latest flick has moments of excellence, but it's no 'Office Space'

We humans love prettiness. It's the only reason most supermodels aren't homeless, and it's why we pay attention to TV anchors and don't generally murder kittens.

Mike Judge's new movie, Extract, is acutely aware and vaguely resentful of this fact. Its sympathetic leads (Jason Bateman and Kristen Wiig) are average-looking, but they are bedeviled by pretty people, who are all either evil (Mila Kunis) or stupid (Dustin Milligan).

Jason Bateman plays Joel, a wealthy sad-sack whose wife won't engage in traditional marital actions with him. This saddens Joel, as the only other thing in his life is his unrewarding job as the boss of a tiny group of low-SAT-scoring factory employees.

At night, Joel goes to a local bar to complain about his wife's refusal to love him in an adult manner. The bartender, his old pal Dean (Ben Affleck, surprisingly), accidentally gives Joel some horse tranquilizers, and then, thinking it will give Joel license to have an affair, the two hire a male prostitute to sleep with Joel's wife. That's the kind of thing that's too far-fetched to happen in real life, but that's OK: We don't pay 10 bucks to sit in the dark and stare at real life.

The next morning, Joel wakes up and vaguely remembers hiring the man-whore, but it's too late to stop such a brilliant plan, and Joel's formerly asexual wife, Suzie (Wiig), starts plowing the low-IQ gigolo (Milligan) like he's the back 40, and it's planting time. Or so it appears; the gigolo has the kind of hot man-cuteness that often comes with an extra helping of stupid, so it's possible that he's been accidentally doing the neighbor's wife.

Anyway, the whole plotline reeks of comedy-movie logic, as does the second major theme of the film: Incompetence on the factory production line leads to a Rube Goldberg-esque series of events which ends when a bolt passes through the scrotum of Step (Clifton Collins Jr.), one of the factory floor workers. That's when beauty appears in the form of pure evil: A grifter named Cindy (Kunis) finds Step and convinces him to sue the company into bankruptcy. Though this has Standard Comedy Plot Element written all over it, it pays off in laughs when Gene Simmons of Kiss, playing ambulance-chasing lawyer Joe Adler, arrives in a halo of hairspray as the champion of all damaged testicles everywhere.

The rest of the story elements in Extract aren't much better, and the movie suffers from its inherent sitcom silliness, as well as from a painfully neat ending that ties everything up in a bow and covers it with sugar sprinkles. But Extract isn't a terrible film; it's just a flawed one.

Judge's dialogue is, as always, excellent, even when spoken by the likes of Ben Affleck. And Jason Bateman can really nail down the beleaguered everyman part. He uses his great assortment of low-key comedy expressions here like he did in Arrested Development; in fact, he's playing nearly the same role. The real surprise, though, is Wiig, who's mostly done funny, one-note bits in a sketch-comedy style. In Extract, she seems like a real human being, and shows the potential to do more serious acting. Unfortunately, her part is fairly tiny; Judge gives most of the meat to Bateman. Too bad; it looks like she could have carried the film, or at least successfully played a more fleshed-out role.

Still, Extract is very watchable and occasionally excellent. Judge is one of the few directors who understand how ridiculous soundtrack music is, and in Extract, he uses that for comic effect. Emotive piano music swells up when Brad the gigolo speaks of love, and triumphant fanfares blare during uninspired motivational speeches.

Plus, there's a charming lack of attention to minor continuity elements. As the camera cuts back and forth while filming conversations, hair jumps from place to place, a hand appears and disappears at the edge of the screen, and the strap of a purse teleports about on Wiig's shoulder. It's nice to know that money that could have been spent micro-measuring the movement of a shirt tail was instead used to pay Gene Simmons to shout at the camera.

So I can recommend it with reservations. It's a disappointment for those expecting another Office Space, but with Wiig's strong work, Bateman's pained expressions and Judge's acute sense of dialogue, Extract is decent, if not cult material.

Extract is not showing in any theaters in the area. 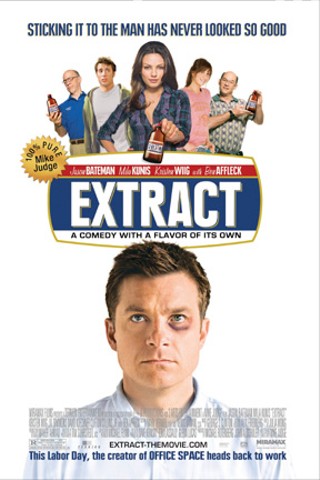