If Funshine Care Bear came to life and excreted an enormous mound of feces, that feces would be the movie The Lovely Bones.

It's a steaming, treacly pile of excrescence, frosted with visuals that look like they were adapted from the pink, lace-covered dream journal of a unicorn-collecting scrapbooker. Essentially, if Walt Disney made a movie about the rape and murder of a teenager, this is the movie he'd make.

The worst part is the screenplay, which seems to have been written by randomly cutting and pasting dialogue from Lifetime TV movies. Much of the script is in voiceover and actually includes the line, "I loved the way a photo could capture a moment before it was gone." Before it was gone! Listening to that is like paying $10 to sit through a Kodak commercial.

And it's a 135-minute Kodak commercial, which is a long time to watch director Peter Jackson emo-splooging all over the screen. The Lovely Bones is, unfortunately, Jackson at his worst. The whole movie is like the end of The Lord of the Rings, when Frodo keeps saying goodbye to everyone as violins swell in the background, and fantasy landscapes threaten to make elves of us all. Except here, we have a little girl saying goodbye to everyone from the most precious-est afterlife ever.

The film opens with Erik Satie's "Trois Gymnopedies" playing over the image of a snow globe, which is nice in that it combines the most overused movie music with the most obvious of movie images. Five-year-old Susie Salmon is staring at the snow globe, afraid that the penguin that lives inside it is lonely. But then her daddy (Mark Wahlberg) tells her that the penguin is very safe inside the globe, so she shouldn't worry.

The film then jumps ahead nine years. Susie Salmon has become an adorable teen (Saoirse Ronan), riding her bicycle through her early 1970s suburban neighborhood. She watches as her dad makes model sailboats, which are a metaphor for being an awesome dad who cares about his daughter, and also, they're in glass bottles, so they're kind of like the penguin in the snow globe, which gives the movie a sense of continuity in its painfully obvious metaphors. See, Dad just wants to keep Susie and everybody safe, like in a bottle, but we all know that just can't happen.

Meanwhile, Susie is super-excited when her parents get her an instamatic camera, and she promptly takes a zillion pictures of all the wonderful, beautiful things in the world, including Ray Singh, the dreamy boy who might just one day give Susie her first ever kiss!

Then, sadly, Susie is raped and killed, which was totally not something she was interested in. But instead of going all the way to heaven, she goes to a magical between-land so that Jackson can unleash a special-effects budget on all his leftover Lord of the Rings fantasy ideas. In this happy dream world, Susie meets a magical friend (Nikki SooHoo), and they ride on candy roller coasters and dance in liquid flower fields. So I guess the moral of the story is: If you murder a 14-year-old girl, she gets to go to the bestest place in the universe.

However, Susie sometimes remembers that she was murdered, and that the murder hurt her father's feelings. The murderer, says Susie, "didn't understand how much a father could love his child." I bet! Those darn murderers just never understand love! So Susie tries to help her dad capture her killer (Stanley Tucci) by being all ghostly. It doesn't help much, but she does get to witness all of the wonderful growthfulness that comes from her death, which is, like, ironic, because growthfulness is the essence of life. Much of this is shown in an excruciating montage, which is, perhaps fittingly, accompanied by excruciating piano music.

On the plus side, Jackson is meticulous in re-creating the early '70s. The hair, clothes, interiors, cars and even the signage are all perfect. And Jackson did call upon some talented actors. Wahlberg gets the period and the emotion, but he has to spit out some vomitously awful dialogue. Still, he keeps a straight face while doing it. Rachel Weisz is underutilized as Susie's mom (because moms just don't love enough to be central characters in movies like this), but she gives the strongest performance.

The most interesting performance, though, is that of Stanley Tucci. He dyed his hair, changed his eye color and seems to be wearing the mouthpiece Marlon Brando used in The Godfather. But most importantly, he completely becomes a creepy, but also sort of cartoony, middle-age lech. As a performance, it's a very studied work of art, though it's perhaps too studied: While I was admiring Tucci's commitment, I found myself pushed out of the movie by the role's salience.

Other than the acting, there's little to recommend this film. It's a self-important and pretentious exercise that misunderstands its own level of profundity. Jackson and company may think they've created a combination of Marcel Proust and Jean Paul Sartre, but it's more like a mix of a bad episode of Oprah and a fortune cookie.

The Lovely Bones is not showing in any theaters in the area. 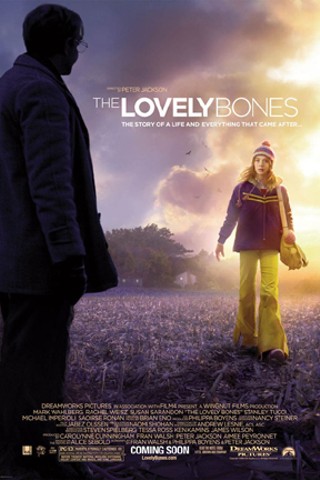