Democrats in the competitive Legislative District 9 meet in forum 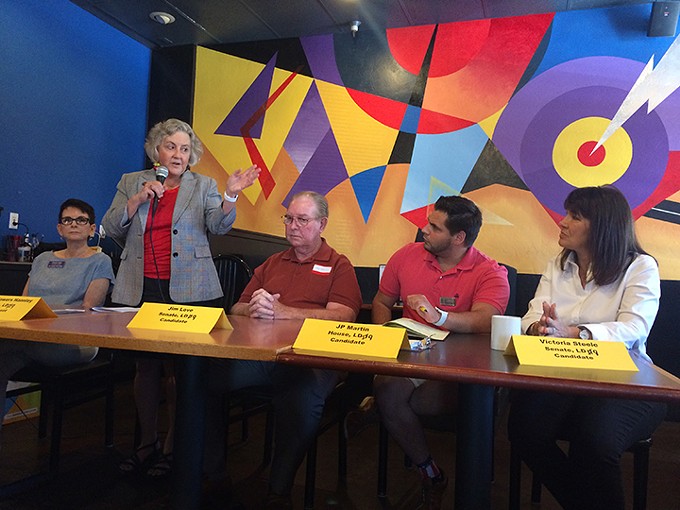 The panel of Democrats were mostly in agreement on many hot-button issues: They support universal background checks for gun sales and better funding for public education; they oppose the Rosemont mine and corporate tax cuts. Another uniting theme: They're all capable of working with the Republicans, who currently control both chambers at the Legislature.

Legislative District 9 encompasses parts of Tucson north of Speedway Boulevard, the Catalina Foothills and the Casas Adobes area. While all three legislative seats are now held by Democrats, the district is one of the most competitive in the state.

Hannley says her policies reach across the aisle. Bipartisan issues she helped push across the finish line were expanding access to affordable dental care for tribal and rural areas and aspects of the Arizona Opioid Epidemic Act.

She grew up in a union family, with the types of benefits that unionized workers can leverage, such as adequate health care and paid vacations.

"I think the workers today in Arizona deserve those types of benefits because they're working hard, but the system is not working for them," she said. "I said when I was going to go to the House that I would be the voice of the people, so that's what I did."

Hannley voted against the 10-year extension of the Rio Nuevo stadium district, last month, originally created by voters in 1999 as a means to develop Tucson while preserving its history. It was taken over by the Legislature in 2010 due to financial mismanagement by the city.

Hannley was one of four Democrats to oppose the extension, along with 17 Republicans. She says the extension is a far cry from what voters approved almost two decades ago.

She says there's no local oversight and a lack of transparency and that while using sales tax revenue to subsidize big developments, like the downtown AC Hotels Marriott, has been good for spiffing up downtown, it hasn't helped small local businesses.

"Is this the best use of our tax dollars?" she says. "If we're going to have economic development, how can we align with what makes us unique? The Marriott does not make us unique."

Her opponent JP Martin thinks Hannley's vote against Rio Nuevo was a mistake, adding that the economic incentive program has helped downtown thrive where not long ago it suffered from crime and a lack of activity.

Martin said he could be a more effective representative than Powers because he could work with the governor and Republicans in the legislature when need be to get stuff done.

"[Hannley] has amazing laws that she put in for consideration," he said. "But I think what has been a detriment was not knowing how to navigate the power to leverage it to get those bills heard."

He brought up her legislation to approve the federal Equal Rights Amendment. The bill had no Republican cosponsors, and it never got a hearing. Two Republican lawmakers sponsored similar bills, along with former Democratic lawmaker Victoria Steele, that also failed.

Martin works as the executive director for the Global Chamber Tucson and has been a board member for the nonprofit Equality Arizona and Tucson Young Professionals. He says those gigs and other leadership roles have prepared him to serve in the Legislature.

Growing up as a "corporate brat," Martin's dad worked in the automotive industry and moved around a lot. Martin has lived in five different countries, speaks three languages and moved to Arizona in 2006. He's interested in economic development and bringing in outside talent to the state.

Friese, the trauma surgeon who was encouraged to run for office after he saved the life of Gabrielle Giffords in 2011, couldn't make it to the forum because he was working. Longtime Democratic activist Cheryl Cage spoke on his behalf, telling the attendees that Friese has never missed a day of work at Banner University Medical Center. He was first elected to the Arizona State Legislature in 2014.

According to the Arizona Secretary of State website, one Republican has entered the race: Ana Henderson, who lost her bid for the seat in 2016. Henderson is a conservative Republican who advocates allowing teenagers to have access to guns for protection on her campaign website.

Love says he's the more moderate candidate, which he says allows him the ability to work across the aisle a little better. Love has been president of the Flowing Wells Unified School District governing board since 2001. He's also a Respiratory Therapist at Banner Casa Grande Medical Center. His family are long-time union members, and so he hopes to get the endorsement of local unions.

Victoria Steel served in the District 9 House of Representatives seat before resigning to run in Congressional District 2, which is now represented by Congresswoman Martha McSally.

A mental health counselor and life coach, Steele is a charismatic public speaker who doesn't shy away from issues of race and gender.

"I am so sick and tired of seeing people being treated like punching bags by this extremist, Republican-controlled Legislature," she says. "So I've rolled up my sleeves. I refuse to sit on the sidelines. I'm ready to go."