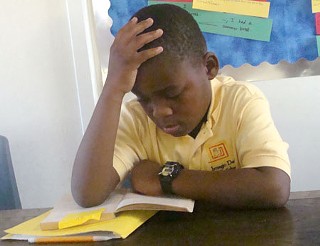 The portfolio that sits on the Rev. Anne Sawyer's desk is a different kind of testament, one that contains the success stories that have taken place in the two-story gray building on the southwest corner of Sixth Avenue and Fourth Street.

As the co-founder and head of the Imago Dei Middle School flips the pages, the picture the Episcopalian priest lingers on most is a close-cropped shot of a bright smiling face—the school's first graduate. To Sawyer, he's an example of why she and the school chaplain, the Rev. Susan Anderson-Smith, started the school in fall 2006.

Both are graduates of the Harvard Divinity School, and it was Sawyer's thesis that ended up being the school's business plan.

"Education can break the cycle of poverty, but so can love. That's what we teach our students, but we also teach them how to follow their dreams," Sawyer says.

Anderson-Smith adds: "When we first talked about this school, we recognized that the kind of educations we were given should be available to everyone. Here, we offer a quality education and prepare them to succeed."

The school is part of the NativityMiguel Network, a Jesuit-curriculum model with 65 tuition-free schools working with poor children and their families in 27 states. Imago Dei is now in its fourth year providing a tuition-free—albeit rigorous—private prep-school education to children from fifth to eighth grade who live at or below the poverty level. Students are in school from 7:30 a.m. to 5:30 p.m., Monday through Friday—with a half-day on Saturday—11 months out of the year.

Revenue comes from individual contributions and foundations, as well as individual and corporate tax-credit contributions through school-tuition organizations like the Arizona Episcopal Schools Foundation.

"When we first started, we found ourselves asking each other, 'Do we not add an eighth grade to maintain our budget?' But we wanted to grow with our children. We could have held down costs if we dropped fifth grade, but fifth and sixth grade is how we build capacity," Sawyer explains.

They hope to solve cash-flow problems using a reserve-fund campaign. Sawyer and Anderson-Smith plan to raise these dollars a little differently—using Facebook.

The campaign—I Saved the Dei (isavedthedei.com)—was developed by Ridgewood Associates Public Relations. The Tucson-based firm selects a nonprofit each year to help with pro-bono services.

"We helped them raise $250,000, and the district's foundation matched it for another $250,000. ... We learned we can use this (model) as a way to get people talking about the value of education and its importance," Benavidez says.

"We have a matching grant now that will help us put $200,000 toward the reserve fund, but, of course, we really do hope to grow our donor base to people who haven't heard about the school," Sawyer says.

In its first year, 12 students enrolled at Imago Dei. Today, there are 45. Eventually, they hope to grow the school to 80 students, 20 per grade. Sawyer says it will cost almost $15,000 per student each year to run the school at capacity.

According to Sawyer, the National Association of Independent Schools puts the cost of a day-school education at $18,300—so in comparison, Imago Dei is a good deal.

While many of the school's students left public schools to attend Imago Dei, Anderson-Smith says both she and Sawyer are products of a public-school education, and they have nothing against Tucson public schools. But they do think the Arizona State Legislature could learn from the Imago Dei model—especially the lesson that a good education costs money. Sawyer says the latest figure she's seen on spending per student in Arizona public schools—a little more than $9,000 a year—isn't enough.

Sawyer returns to the portfolio picture of the school's first graduate. The student, Ege Ishimwe, she says, is an example of how they make sure students are successful. A survivor of the Rwandan genocide, Ishimwe was forced to take refuge in the jungle and ended up in South Africa for several years before he and his family arrived in Tucson.

Sawyer says Ishimwe was 14, but academically at a fifth-grade level, when a friend introduced his family to the school.

"After two years with us, we were able to catch him up and help him get into San Miguel High School," Sawyer boasts.

The kind of help offered to Ishimwe is offered to all students, but Sawyer says they can only succeed if parents work as partners with the school. Families have to make sure students get to school by 7:30 a.m. each morning, and must be willing to address underlying challenges that prevent a child from excelling in the classroom.

"There needs to be a willingness to work with us in good days and bad days," she says.

Another example of what Imago Dei does differently occurs when students leave. When Ishimwe left, Imago Dei sent two volunteer reading specialists to continue working with him.

"Part of the transition to high school for all our students is helping them select the best high school the child needs, but then we are committed to following our students through high school, providing them with ongoing support to help them decide on post-secondary education, or what ever they need to live their dreams," Sawyer says.

When Imago Dei placed first last year in a national design contest for their plan for a green and sustainable school, Anderson-Smith says students began to see how they could accomplish their dreams. Some students who participated plan to attend architecture school, while another is interested in law.

While it's easy to point to discipline and support as the reasons why Imago Dei students succeed, Anderson-Smith says she thinks they also do well because of other ingredients provided by her, Sawyer and other Imago Dei teachers.

"Justice, love and compassion," she says.