Yes, there are kid movies that adults can enjoy. The Nut Job is not one of them.

Movie critics can throw a little too much shade sometimes, particularly at animated films. Most cartoons aren't meant to be ingenious and probably 50 to 60 percent of them aren't designed with adults in mind. Pixar cleared that bar with The Incredibles and—through Toy Story 3—had an incredible run of stories written for adults that kids would enjoy watching. (Also, Cars, but let's not get into that.)

So the question of whether, say, Despicable Me will entertain your kids for a couple of hours is different from whether it's actually good. In that example, it's good and solid family fun. For The Nut Job, it's a resounding no on both counts, as judged by the thunderous silence from the kids at a free movie screening. They were bored, indifferent and clearly not amused.

It wasn't a perpetual silence, mind you. The film features a couple of out-of-place flatulence jokes, the lowest of all lowest common denominators. And when Surly the squirrel (voiced by Will Arnett) finds a treasure trove of nuts he calls "The Lost City of Nutlantis," it also gets some audible chuckles. But that's just about the end of the entertaining stuff for the tykes. If you've ever been to open mic night at a comedy club, you know how loud crickets can actually sound, and that's the experience with The Nut Job.

Surly is an independent type. He works outside the ecosystem of The Park, which is run by Raccoon (Liam Neeson). He tries to steal a lot of nuts for his own winter storage, taking the supply away from the various mice, rats, moles, chipmunks and squirrels in The Park who are facing a shortage. So Raccoon banishes Surly to The City, a terribly imposing place.

But the squirrel is resourceful and quickly finds a nut shop he can't wait to break into. Meanwhile, the proprietors of this shop have their eyes on a bank vault across the street, planning a heist of their own. For some unknown reason, this all seems to take place in the 1930s because there are old-timey paddy wagons and mobsters named Knuckles and Lucky, as if robbing banks no longer appealed to modern criminals. And it's one of the many instances here that adults won't think is funny and kids probably won't be able to identify with, so why have it in the movie?

The idea of one thievery attempt layered physically over another one in the same building isn't bad, but it is unnecessary for this kind of affair. Subplots aren't terribly interesting to small children. The Nut Job could use a little addition by subtraction-fewer anachronistic dependencies on the mafia, allowing more time for jokes and mindless exploits featuring cute talking animals.

With a script this flat, it's a wonder they got someone with Will Arnett's cachet, to say nothing of Liam Neeson. Also receiving checks: Brendan Fraser, Maya Rudolph and Katherine Heigl. How could they all look at a screenplay with so many plays on the word 'nuts' and not have anything else to do that week? "This plan's nuts!" "What are you, nuts?" "I'm just a squirrel looking for a nut." Money beats funny, apparently.

In that case, someone ought to be paying the kids in the audience, too, because at their impressionable age, they'll laugh at just about anything. Or at least anything but this flat-liner.

‘No surprise to me’: Ex-Wildcat Ayton expects to dominate for Suns
Top Stories

The Nut Job and The Nut Job 3D are not showing in any theaters in the area. 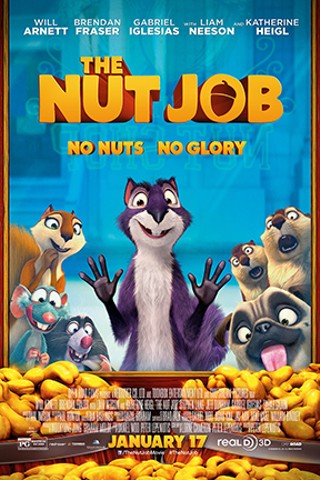