Established by Pima County voters only two years ago, the Joint Technological Education District (JTED) already has something in common with more traditional school districts: Hardly anyone wants to serve on its school board.

At the same time, enrollment in JTED classes has blossomed. There were approximately 12,700 high school students taking career and technical-education courses before JTED's inception; the current figure exceeds 17,200.

Meanwhile, the initial school board appointed to oversee the operation of the new district has been scrambling to keep up. "We've kind of been flying by the seat of our pants," admits JTED board member Alex Jácome.

Operating on an approximately $18 million annual budget, JTED financially supports other area school districts so that those districts can provide classroom training in a wide variety of areas, including information technology, business management, automotive repair and culinary arts. New to the list for the fall of 2008, Storm says, are pre-engineering, biotechnology, nursing assistance and fire science.

Unlike most JTED courses, which are taught at and by local high schools, evening classes for these latter two subjects are held at the district's spacious headquarters on the northwest side.

One of the nursing classrooms contains several hospital beds occupied by mannequins. The classes are taught by a registered nurse, and after graduation, the dozens of students can either receive more medical training or take a test to become a certified nursing assistant.

Storm sees this type of centralization of classes at sites across Tucson as the future trend for the district.

The initial JTED concept was that students could travel to an established class at a participating high school. However, Storm admits that little of that has happened, because of the variance between schools' starting times and calendars.

"We need to get the districts to look at what programs they'd like, and where to teach them," Storm says of this issue. Once that information is available, Storm asks: "What programs need to be centralized?"

Using funds supplied both by the Arizona Department of Education and a Pima County property-tax levy, JTED distributed $12.5 million during the last school year. While some of these funds paid teachers, Storm says much of the money was used to buy equipment, ranging from computers to automobile lifts.

According to records supplied by Storm, the disbursement of these funds to various districts closely corresponded to the number of students enrolled in a JTED class. Thus, the Tucson Unified School District, which had in excess of 9,000 students participating, received more than 50 percent of the JTED-allocated money.

Pima County's JTED was preceded by similar districts across Arizona, and Storm acknowledges that some of them were not as responsible in overseeing their funds as they could have been. However, he says that's not the case here. "I feel all our districts spent their money appropriately (during the last school year)," he says.

Fiscal issues are one reason why Jácome is running for election to stay on the board. "We need to make sure the districts are accountable for the JTED money they receive," he says.

To do this, Jácome favors auditing the various school districts and establishing standards for how they spend the money they get from JTED. "We shouldn't be immersed with paying for infrastructure and staff," Jácome believes.

Along with 10 others--each appointed by a participating Pima County school district--Jácome was named to the original board early last year. But going forward, the JTED governing body will include only five members, one to be elected from each of five Pima County districts--just like county supervisors are elected.

Interest in being on the board is minimal. In two districts, only one person will be on the ballot in November, while in District 2, nobody will be listed. However, two people--Ruth Solomon and Maria Elena West--are running as write-in candidates.

Until last week, there were two competitive contests for the JTED board. But then Charles Gallagher decided to withdraw his name in District 4 since he endorses Jácome.

That means the only competitive JTED race, besides the write-in contest in District 2, will be between Christopher Weiss and Brian Forstall in District 3. Forstall mentions fiscal accountability as one reason he is running. "We need to see results (from the districts) along with handing out money," he says. He would also like to see more technology brought into the classroom. But Forstall is most passionate about bringing applied learning to JTED students.

"We should integrate math, science and reading into JTED classes," he says, offering an example of using an automobile tire to demonstrate the importance of knowing how to determine the radius and circumference of a circle.

Current board member Weiss believes JTED should encourage students to become lifelong learners, whether they go on to college or not.

Many Tucson businesses gave strong support to the creation of JTED two years ago, but now that interest has apparently waned. Weiss thinks the next board needs to do a better job of letting people know what JTED does in order to encourage more involvement from the business community.

"We need to educate the community about JTED," Weiss says, "then people will step up and want to help." 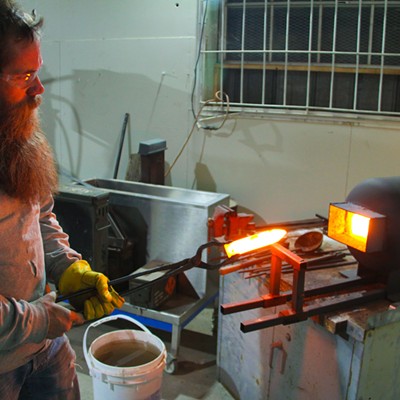