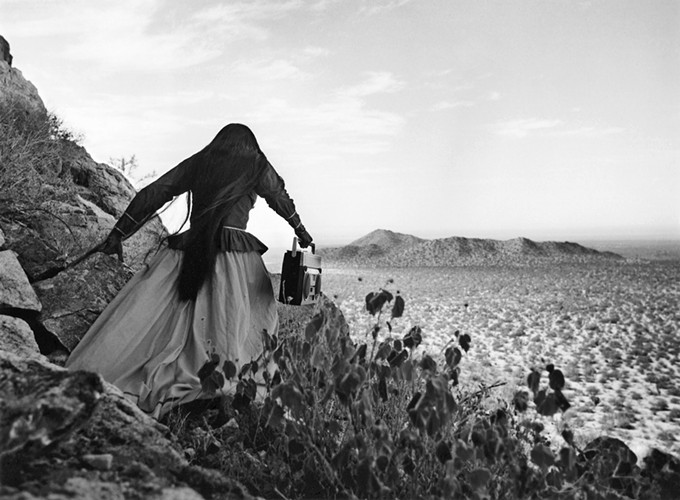 From a famed Mexican photographer’s first major show in Tucson to the return of a stolen painting, the art season is chock full of landmark moments.

Known especially for photography, the revered gallery provides a spectacular launch to the fall art season. Famed Mexican photographer Graciela Iturbide is coming to Tucson in honor of her first major show in the city. The exhibition, “Sueños, Simbolos, y Narración (Dreams, Symbols and Storytelling),” will be showing some of her greatest pics, Her beloved “Mujer Angel, Desierto de Sonora” is just one treasure among the 35 gelatin silver prints on view.

Born in 1942, Iturbide will give a lecture at the Center for Creative Photography at 5:30 p.m. Friday, Sept. 23. It’s free but you will need go early to get a seat. The next night, Saturday, Sept. 24, Iturbide will attend the opening reception; the fun will be at the gallery from 7 to 10 p.m. Some of her books will be for sale. The show runs through Nov. 26. Coming up in December, artists Alice Briggs and Albert Chamilard will grace Etherton’s gallery in Barrio Viejo. ethertongallery.com

The vibrant glass gallery in the happening 5 Points neighborhood is getting ready to celebrate its 40th anniversary. The proprietor since 2019, Alison Harvey will showcase sparkly works by giants in the field: gallery founder Tom Philabaum, Michael Joplin, Carole Perry, Dan Enwright and Louis Via. All are “legendary Arizona artists,” Harvey says. In the meantime, she’s adding new artists to the gallery, including Joseph Ensno and his glistening wall works. The festive party rocks on from 4 to 6 p.m. Saturday, Oct. 15. philabaumglass.com

The lovable gallery in the middle of a beautiful garden is blazing with fiery art. “The Elements: Fire” has gorgeous works. Check out Anne Muñoz’s quilted “Perfect Storm” raging flashes of golden lightning against a blue sky. Carrie Seid’s silky work simmers in orange red and Brian Hooker’s blackened sky is pierced with strings of light. The show of 70 pieces by 50 artists is the third in a series of artwork mixed with science and the environment; the first shows examined earth and air. The fire show runs through Nov. 9. Water is still to come. tohonochul.org

The excellent art gallery at Pima Collage West begins the season with “A Tribute to Clay.”

In the Arts Warehouse District just north of downtown, Contreras has mounted a show of 17 artists who make all kinds of fine art prints. At least nine types of prints are on view, including woodcut, etching, engraving, and more. Among the cavalcade of artists you can find are Jo Andersen, Julia Andres, David Andres, Neda Contreras and Glory Tacheenie Campoy. Show runs through October 22. contrerashousefineart.com

Up the stret from Contreras, Raices Taller has reopened after a long pandemic hiatus. The new show, running from Sept. 10 to Oct. 15, is all about paper. But paper can take different forms. There are drawings and photos, of course, but you will also find paper sculptures, paper paintings and mixed media using — you guessed it — paper. The hybrid show will have every piece on view in the gallery, but some will also be online. raicestaller222.com

This collective gallery typically exhibits its own artists’ work in the Steinfeld Warehouse. This time around, for a show called “Still,” they’ve invited more than 40 guest artists who work in a variety of mediums. untitledgallerytucson.com

“Hole in the Fence” is an exhibition of five artists at Everybody, a young, contemporary gallery at 437 E. Grant Road. Standouts among are stoneware by zenas proa, and colored pencil on paper by Drew Miller. The show runs until Sept. 17. In October, they’ll open up a show named “Flor.” everybody.gallery

The University of Arizona Museum of Art

The big news at the museum is the return of “Woman-Ochre,” the Willem De Kooning painting that was a stolen from the museum in 1985. This is the first time Tucsonans will get to see it after its recovery in Silver City and its restoration at The Getty in Los Angeles. A new movie about the heist will screen on Oct. 6 at Centennial Hall on campus. The painting itself goes on public display on Oct. 8. The galleries will also display other mid-century abstract works in the museum’s collections, including a precious painting by Mark Rothco.

Frances Murray and Harold Jones, two photographers formerly of Tucson, are being feted in their old stomping grounds with a year-long exhibition of their work titled “Simpatico.” The pair were part of a 1970s wave of notable photography in Tucson. Murray is known for her striking nudes and still lives. And Jones, the founding director of the Center for Creative Photography, created, among other works, hand-colored photographs.

The museum is also featuring a dramatically different exhibition devoted to a single painting from the early 19th century. It’s a portrait of a well-off young woman, painted by José Gil de Castro, a celebrated artist with an unlikely pedigree in time of racial conflict: he was an Afro-Peruvian born to an enslaved mother. tucsonmuseumofart.org

The Center of Creative Photography

An exhibition of wonderful photographs by Alanna Airitam, “The Golden Age,” continues until Oct. 29. An African American who moved to Tucson, Airitam makes richly colored photographs of African Americans. She pointedly dresses them in fine aristocratic clothing, cleverly appropriating imagery from the old Dutch masters’ portraits to celebrate the power and beauty of contemporary Black women and men. ccp.arizona.edu

MOCA continues with a potpourri of exhibitions that opened earlier in the year. They range from the big, colorful canvases of Grace Rosario Perkins, a Diné and Akimel O’odham artist (until Oct. 16), to the playful video art of Kenneth Tam on about immigration and masculinity in the American West (Feb. 5). Intimate watercolors of the great outdoors by the Tucson Plein Air Group (Feb. 5) nicely fill another corner of the museum. moca-tucson.org