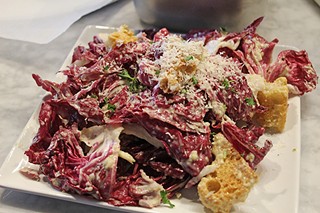 Leaving behind their chain of 18 restaurants in Portland, Marc and Tracy Frankel came to Tucson for a semi-retirement. But after three decades of making pizza, Marc just couldn't leave it alone. Sure, hiking and cycling were fun, but running a restaurant is in his blood.

Thus, after a quick six months of preparation, Pizza Luna is here. But as Marc confides, it's a labor of love. He isn't starting the new pizza place to expand his brand, he's doing it because, well, why not make pizza?

"I'm sort of remaking what I started years ago," Marc said. "We're gonna use the best olives, cheese, everything is going to be high quality. We're gonna have attention to detail because we love what we do."

"It wasn't a corporate plan to grow nationally or anything," Tracy said. "He just wanted to do what he wanted to do. I wasn't thrilled when he started, but I wanted him to be happy. But now that it's open, I'm so excited."

Pizza Luna brings together over 30 years of pizza-making expertise, coupled with various tricks-of-the-trade to make a unique but very well-crafted pie. First off, save for the veggies, just about everything is made in-house: the pizza dough, the mozzarella, the croutons for the salad, the dressing, even the sausage.

The term they use for their pizzas is "Neo-Neapolitan." Neapolitan pizza is a style of pizza made with tomatoes and mozzarella cheese. The Frankels expanded on this concept, but added their own twist: olive oil is mixed into the dough and it's cooked at a higher temperature. Thus, you get a light, crispy slice that still manages to taste rich, especially with their whole-milk cheese.

"We're not specifically trying to do anything different," Tracy said. "We'll let the people decide what's special about us."

The passion and talent are clear; the pizza's crust is delicious and has a kind of crackle from the baked olive oil within. Generally a cheese pizza could seem plain, but their house-made cheese can certainly hold its own, and when you add fresh toppings in addition, it's a slice worth remembering.

The radicchio Caesar salad is another favorite. The garlic anchovy dressing adds a hint of spice, but not enough to counteract the red, leafy base. The grated grana pradano cheese tops it all off, and mixes well with the hearty, house-made croutons.

"You have to start with a great dough," Marc said. "I learned how from running our bakery in Portland."

The dough starts with a 72-hour "cold fermentation" process, then the toppings are added and it's baked at 670 degrees. This results in a pizza crust with "leopard spots", which Marc says indicates that the dough was cooked just right. Their kitchen oven is a state-of-the-art machine which is able to cook both sides of the pizza simultaneously and reach temperatures of over 700 degrees.

"He bought the oven before we even had a location picked out," Tracy said. "It was that damn oven that started everything." ■