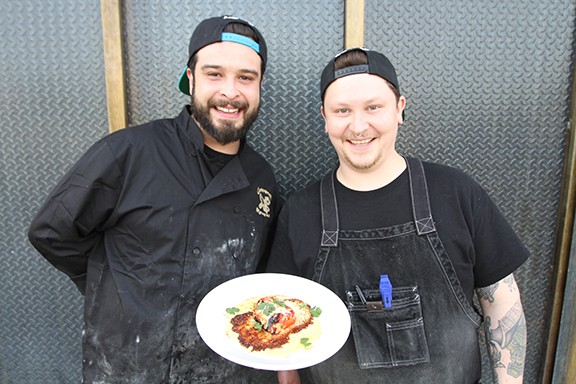 Every Wednesday
Thunder Canyon Brewstillery
220 E. Broadway Blvd.
When William Cowper penned the stanza, "Variety is the spice of life, that gives it all its flavor" in his 1785 poem "The Task," the poet had no way of knowing he would capture the essence of what drives a chef to open a pop-up restaurant.

I'm not talking about variety as in more options to serve guests, but a variety of culinary skills chefs employ to create new and exciting cuisine from traditional dishes.

Variety of this nature is well understood by Jeronimo Madril, owner of Geronimo's Revenge food truck, and Matty Parsons, owner of Shifty's Pizza, who recently teamed up to create a pop-up restaurant every Wednesday at Thunder Canyon Brewstillery. The two chefs reimagine various comfort food dishes from around the world, adding Sonoran flare to many of their creations.

"We made the noodles out of masa instead of just flour. So, it has a tamale and hominy flavor to it and a different texture from your normal ramen noodle," said Parsons. "It's a little bit of Sonoran accoutrements, as well as the traditional Japanese style."

With very little promotion on social media and relying on friends and family to repost, Madril and Parsons ended up much busier than they had expected the first night. Now every Wednesday is busy for the duo and customers are lining up to taste Madril and Parsons creations.

"Business is getting better and better and everything seems to be clicking," Madril said. "Definitely since Guy's Grocery Games, everything has really been picking up."

Earlier this month, Madril won Food Network's Guy's Grocery Games by creating an Asian/Mexican fusion version of fish and chips, using Sapporo-battered cod, marinated in green curry and tamarindo, with fried yucca chips on the side. Madril's culinary fusion on the show is pretty much an amalgamation of what he and Parsons do every Wednesday at Thunder Canyon Brewstillery.

This week, the two chefs were busy preparing for the evening's menu: roasted red bell peppers, stuffed with Parsons' housemade Italian sausage and rice with a roasted corn and brown butter cream sauce. Madril whipped up a Mexican candy tart with homemade strawberry chamoy for the dessert.

"Matty really wanted to do a stuffed pepper. I always loved those. My mom used to make them when I was a kid," Madril said. "It hit me to make a Mexican tart. I was like 'Dude, that's me...100 percent.'"

Madril talks to me about the menu as he peels cucumbers for a garnish. As Parsons walks by, he notices the peeler Madril is using is his new one, purchased that day.

"Is that mine...my new one? I haven't even used it yet," Parsons said half joking, half serious while shaking his head.

"Yep," Madril responds with a big smile on his face, as a brother would to mess with a sibling. Both chefs know it's an unwritten law, known from Paris to Bangkok, you don't touch another chef's stuff without approval first. No matter what.

But you can tell there isn't any animosity between them over the faux pas. These two truly act like brothers who may get on each others' nerves, but they never stay mad for long. They push each other in a good way. The story of how they came up with the pop-up illustrates the dynamic.

"I always wanted to do a pop-up," Madril said. "After I got my food truck one of my main goals was to do different pop-ups at different venues, but there were a lot of challenges."

After two years in business, Madril started renting space from the kitchen at Thunder Canyon to serve as the commissary for his food truck. He said he saw the potential and made the opportunity, instead of waiting for it to happen.

"I was determined to do it. So I literally came in here one day and said 'Alright, this is happening,'" Madril said. "Matty was like 'Well..", but I stopped him and said, 'I don't really care. I'm going to do it whether you like it or not.'"

Parsons soon got on board and their pop-up restaurant has been going strong for the past three months. Parsons says the most rewarding aspect of the weekly pop-up is how it pushes him to be creative, using what they have around the restaurant and ultimately making him a better chef on a weekly basis.

"The pop-ups keep my skills sharp. I'm constantly thinking about food and coming up with new techniques and ways to achieve my ideas," Parsons said. "This gives me an opportunity to grow or teach myself through trial and error."