A uniformed chef was caught with his fly down after drunkenly crashing a purple golf cart into a water main, a Pima County Sheriff's Department report stated.

Sheriff's deputies received a call from a Shell gas station employee in Green Valley saying that an intoxicated man driving a golf cart had just crashed into the station's water main, leaving an alcohol bottle rolling around on the ground nearby. There was water now spewing out in several directions all over the roadway.

Deputies found the driver still near the crashed golf cart—which was purple in color—decked out in a chef's jacket but wearing very dirty, unzipped pants and no winter coat, despite the extreme cold. Without explaining why he was driving a golf cart in the first place, he "excitedly" said he'd been looking at his phone while driving and had been blinded by a car with bright headlights, at which point he crashed. With a heavy foreign accent—perhaps from overseas—the man said he was the head chef at a local restaurant and had just gotten off work. He smelled heavily of intoxicants.

At first he adamantly denied having drunk any alcohol, saying it would be "unprofessional" to drink at work. But after failing numerous field-sobriety tests, he admitted he'd recently had three—no, two—glasses of wine with dinner.

He was brought to the police station and agreed to have his blood drawn, though he insisted the accident hadn't been "100 percent" his fault because "the other car had such bright lights"; he also kept saying he wasn't actually drunk. As his blood was being drawn, he explained, "I'm a chef. I drink wine. What can I say?"

He was cited and released on several charges—but since none of them was stealing a vehicle, the purple golf cart was probably his own.

A bus driver was assaulted with a fountain drink by an unruly passenger, according to a PCSD report.

The driver told a deputy she'd been driving a full bus on her route going south on Alvernon Way when a man and woman tried to board. When the man swiped his frequent-rider bus card, the meter showed it had no value as fare. Both people yelled at the driver, and when the man swiped the card again, it worked. But apparently, the subjects still weren't happy, since the driver said they kept "running their mouths" as she continued her route, refusing to get off.

Finally, she said, the woman disembarked through the back door—but the male walked up to her and forcefully threw a soda all over her her face, hair, shirt, jacket, sunglasses and pants before fleeing.

The driver was advised to photograph and/or attempt to repel the subjects if she saw them again. 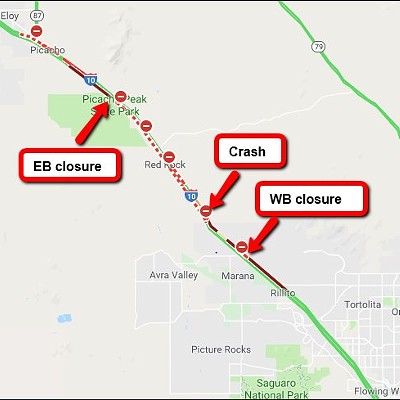