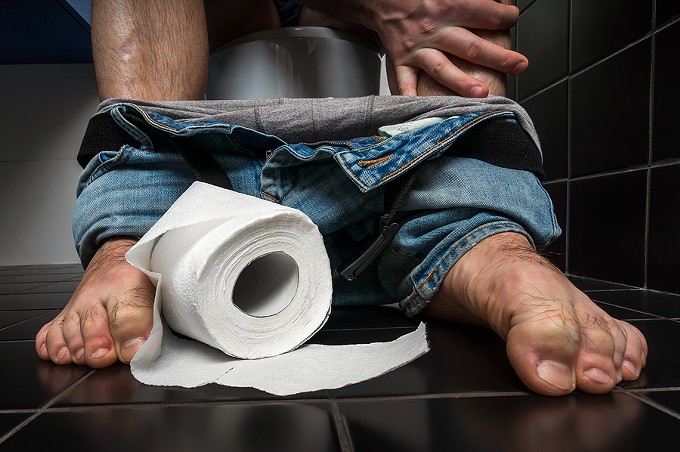 A man was caught with drug paraphernalia after locking himself in a convenience-store bathroom and "growling," a Pima County Sheriff's Department report said.

Sheriff's deputies responded to a northside Circle K, where an employee said a man had been in the bathroom for a very long time and wouldn't come out. He said he'd knocked repeatedly on the door of the single-occupant restroom, but the only response from within was "growling sounds."

Two deputies finally got the person inside to yell, "Hold on!" and heard the toilet flushing. After a further delay, he obeyed their stern commands to exit. One deputy observed facial abrasions similar to what he associated with chronic methamphetamine abuse.

Asked whether the man been in there shooting up methamphetamine, he said no, following up with "an excited utterance" that he didn't have any drugs on him but did have paraphernalia.

After handcuffing him, deputies found on his person seven syringes, the cut-out bottom of a soda can "used to cook drugs," and two bands "similar to those used to tie up an arm when shooting up illegal substances with a needle" (in addition to a band on the ground at his feet, which he said was his). Still, he denied having just shot up drugs, saying he'd only been "in the restroom to go to the bathroom."

The man indeed possessed no actual drugs—just a few items including some food from Wienerschnitzel and a bag containing two lighters, two rolling papers and some non-tobacco chew. Upon request, deputies threw away his hotdog and hid the bag for him under a bush so he could retrieve it later. He was taken to jail without incident and booked on a drug paraphernalia possession charge.

A pro-gun, anti-liberal University of Arizona student allegedly resorted to brandishing a pencil in lieu of a gun (not allowed on campus), according to a UA Police Department report. Two UA officers met with a Residence Life office employee who said she'd received an email regarding a "welfare/safety check" on a student from a dorm she helped oversee.

The anonymous email sender expressed concerns about this student's behavior, including heated statements that he "disliked liberals" and opposed all gun laws, and a declaration that if guns were allowed on campus, he'd have one.

The email didn't say the subject had made any actual threats to harm anyone but alleged he'd "once held a pencil in a threatening manner."

When one of the reporting UA officers interviewed the subject, he calmly denied wishing to harm others or himself, admitting he was pro-gun but saying he was well aware that the UA is a weapons-free campus and denying any intention of ever bringing a gun there. ■

He was provided with a case number for the incident but escaped any punishment for the way he handled any pencils.