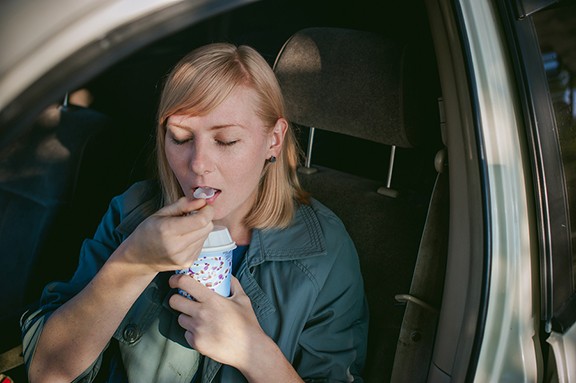 A super-high woman was caught behind the wheel after a late-night Dairy Queen run, according to a Marana Police Department report.

An MPD officer responded to a Marana Dairy Queen, 12050 N. Thornydale Road, regarding a "check welfare" call. The restaurant's employees said a woman who used the drive-through about an hour ago "did not seem right," and she was still parked in front of the store, apparently asleep in her vehicle, which was still running.

The reporting cop met another officer in the front parking lot, where they found her in a big Dodge pickup that was parked but indeed not turned off, crookedly taking up two spaces. The woman behind the wheel "appeared to be unconscious" and didn't notice they were there until after repeated tapping on her window, which she finally lowered to peer out, drowsily giving them her name.

The reporting officer smelled no alcohol on her breath but immediately smelled a marijuana-like odor coming from inside the car—where he then spotted a glass marijuana pipe in plain view in the center console. He asked her to exit the car and she stumbled slowly out.

Upon questioning, she denied having consumed any drugs or alcohol that day, saying she'd just wanted some food from Dairy Queen before it closed (though she didn't know the current time) and "got tired" so she'd pulled over "to rest." She insisted the weed pipe was her son's.

She willingly submitted to field-sobriety tests but failed them all, unable to stand very well. Upon searching the car, the two policemen not only found a small jar of marijuana but also several bottles of prescription-only pills (not prescribed to the subject) and a plastic pen cut up to act as a straw, with one end burnt. The woman admitted this was a "tooter" for ingesting drugs and said she'd gotten the medication—totaling a whopping 218 pills—in Mexico. Still, she insisted, she wasn't actually on drugs.

The woman was cited and released for driving under the influence and possession of marijuana and drug paraphernalia, with other charges pending lab analysis of the pills and blood drawn from the woman.