When Wine Time’s a Crime 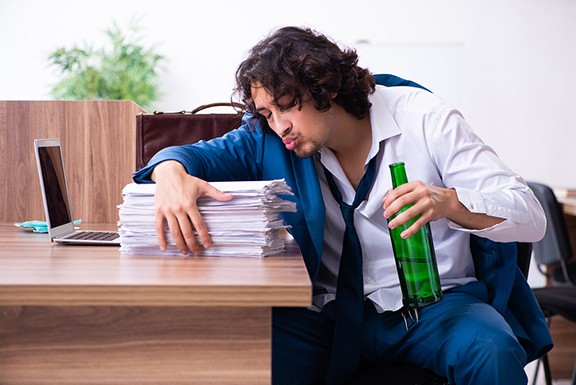 Soon after 5 p.m., a young male student was found already super wasted on wine in a University of Arizona library—and was very lucky to escape jail (though he might've preferred it to being picked up by his father), according to a UA Police Department report.

Two UA officers responded to the Science and Engineering Library, 744 N. Highland Ave, where a librarian reported an intoxicated male in room 133F.

Upon entering the officers were hit with an overwhelming smell of wine breath, obviously emanating from a droopy-eyed young man who couldn't stay steady on his feet. They got their hands on his ID, which showed he was a 24-year-old student. But he couldn't speak coherently—asked his birthday, he simply said, "Yes."

After repeated commands from the cops, plus prompting from the librarian—who'd seen him holding it—the subject pulled from his backpack a three-fourths-empty bottle of Livingston-brand merlot. Instead of handing it over, he made a last-ditch attempt to drink the rest. One officer grabbed the bottle away just in time.

The officers called in two teams of emergency medical responders, who said he didn't need the hospital. The officers determined not to jail him, just to get him home safely ... but they had no idea all this would entail.

First they helped the kid call an Uber and started escorting him to meet it, but after they'd all exited the library, he fell. After sitting on the ground for a while, he agreed to let them physically help him meet the Uber car, but even with their assistance he couldn't walk. Nearly carrying him, they made it to some nearby steps to sit him down.

From that point, the subject became increasingly agitated and decreasingly functional. After repeatedly refusing the emergency room, he tried (and failed) to stand and mount the steps on his own, pushing the officers away when they tried to prevent him from self-injury. His coordination had deteriorated so much that he couldn't work his phone.

At last the officers had no choice but to handcuff him for his own safety and place him in their patrol vehicle, which perhaps frightened him into giving them the phone number of his father, who came to pick him up—and who apparently could've done so all along were it not for the subject's obvious hatred of the idea.

After he was un-cuffed, right before entering his father's car, he somehow summoned the coordination to look the reporting officer in the eye, raise one hand to ear level with index finger extended, and move his thumb to mime shooting himself in the head.

The father "scolded him" and apologized to the officers for his son's behavior before they drove off. Officers submitted a report about the incident to the dean of students.