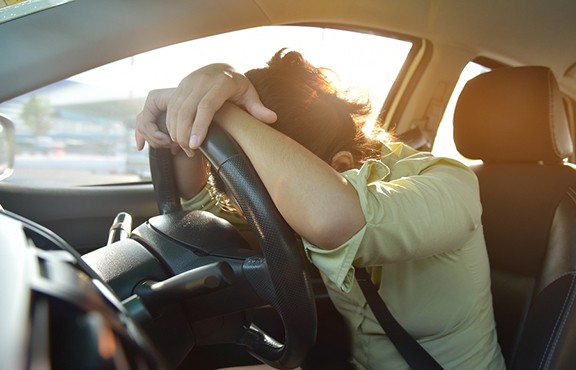 A woman found reeking of weed and passed out behind the wheel of a running car was probably high on more than marijuana, according to a Marana Police Department Report.

A citizen called MPD dispatch to report seeing the woman in a green Subaru behind a Sprouts store; she "appeared to be on some kind of drug and looked like she kept falling asleep." He said she stirred when he'd tapped on her window but immediately fell back asleep.

An officer on scene found the car parked crookedly with the motor still on. The woman inside was slumped forward with her head on the steering wheel and her left hand loosely holding a lighter and cigarette.

When the officer pounded repeatedly on her window, she finally sat up and rolled down her window, sending forth a strong odor of marijuana, and asked him (without prompting) if he wanted her to "show him where the pot was." She was able to exit her vehicle after his second or third command to do so.

After being read her Miranda rights and admitting she didn't have a medical-marijuana card, the woman declined to answer questions, preferring to speak to her lawyer.

Handcuffing the subject and placing her in their police car, the reporting officer and his partner searched her Subaru, finding not only a baggie full of marijuana but also evidence that she'd been using at least one other "harder" drug: cut-up straws (commonly used to smoke meth or heroin) and pieces of tin foil covered with the burnt residue of a smokable substance—like meth or heroin. Though the officers didn't find actual drugs besides the marijuana, one might conclude the woman had been smoking heroin, since she likely would not have been falling asleep on meth.

She was cited for marijuana and drug-paraphernalia possession and released to her lawyer, who came to drive her home.

A man who wasn't drunk, high or handicapped took a northside joyride through traffic via a stolen electric shopping-cart meant for use (indoors) by people with disabilities, according to an Oro Valley Police Department report.

The manager of a Walmart at 7951 N. Oracle Rd. told an OVPD officer that one of the store's motorized shopping-cart scooter had gone missing earlier that afternoon and now someone had reported seeing a man riding it around near a gas station at 8080 N. Oracle Rd.

The officer soon located and detained the shopping-cart rider, who insisted he'd found it, not stolen it, then refused to answer further questions.

After a witness swore he'd seen the subject with the scooter in the Walmart parking lot, the man was jailed for stealing it and banned from Walmart property.