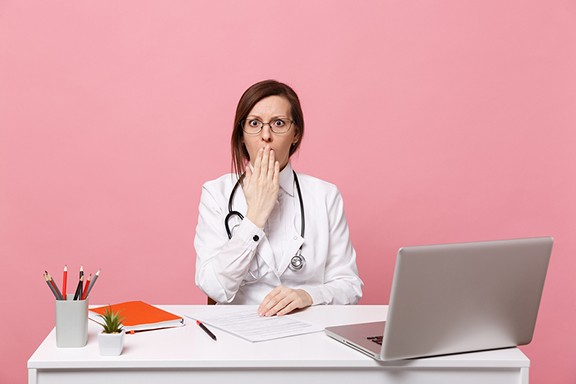 After being thrown out of the University Medical Center, a bum-baring woman—apparently psychologically, not physically, afflicted—wanted to be left alone but didn't want to leave, according to a University of Arizona Police Department report.

UA officers convened outside the UMC's Cancer Center, 1515 N. Campbell Ave., where many bystanders had already gathered to gape at a woman in a gaping hospital gown.

The woman had just been forcefully ejected from the hospital after successfully fending off attempts to dress her. Now lying on the curb near the emergency-room entrance, she wore nothing under her gown, which "was not covering up her backside," leaving her naked rear end visible to all onlookers. Although emergency medical technicians had declared her physically fine to get up and walk away, she preferred to lie on her side and yell at everyone around her, calling officers, EMTs and bystanders "idiots," "jackasses" and "bitches."

UMC security officers tried to cover her with another hospital gown to no avail—she wouldn't move, not even sit up, for anyone. So after a final warning that she'd be arrested if she didn't change her behavior, the UA officers had to haul her to her feet as she was, forcing her hands behind her back to be handcuffed just above her bare bottom.

At least all they needed was a quick visual check to ascertain she was concealing no contraband in her clothing.

She then went limp in the officers' arms and purposefully fell forward when they tried to stand her up, obliging them to actually carry her to their patrol vehicle, where they strapped her in. As one officer drover her to jail, she spent the whole trip calling him a "bitch" and "cunt" and "making statements referencing (his) death."

She was booked for criminal trespassing.

An Oro Valley preteen apparently escaped both punishment and injury after breaking a school-bus window with his head, an Oro Valley Police Department report stated.

An employee at Wilson K-8 School, 2330 W. Glover Road, told an OVPD officer that afternoon a sixth-grade boy had been on a bus outside the school when he slammed his head against a window and it shattered.

The boy readily admitted to the head-slamming but didn't understand why the window had actually broken. He said he'd banged his head against it because the bus had been parked for awhile and he was "frustrated with the bus driver for not leaving the school" to transport him home.

He was given an ice pack at the nurse's office but appeared basically unhurt. The school's assistant principal agreed not to file charges and the boy's father agreed to pay for the window, valued at about $200.