Truly, the Day’s Most Important Meal 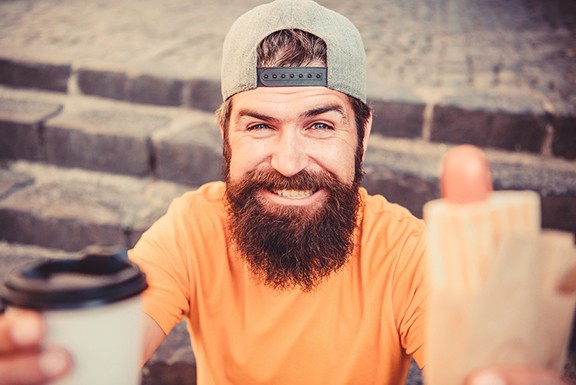 A man who'd clearly not breakfasted gave new meaning to the term "hangry" when caught stealing an armful of convenience-store junk food by University of Arizona cops, according to a UA Police Department report.

An officer spotted a man matching the description of someone the UAPD was already tracking down regarding a indecent-exposure incident from the previous night. This subject was fully clothed, though, in a black T-shirt, a black baseball hat, sandals and green pajama pants with a vibrant Teenage Mutant Ninja Turtles print. He was swiftly exiting a Circle K convenience store somehow juggling a bag of chips, a large Polar Pop beverage cup and numerous other food items which—according to the store's manager, who was right behind him—he'd just blatantly shoplifted.

The officer gave chase when the culprit immediately started running away (still somehow hanging onto his edible loot). He ignored repeated commands to stop, running all the more quickly, until he tripped over one of his sandals and landed on the ground, promptly assuming a fetal position. At this point he finally lost his stolen goodies, which went flying across the sidewalk.

The officer pinned the PJ-clad pilferer to the ground and handcuffed him just before the arrival of two backup officers. He was then read his Miranda rights and asked if he understood; he responded, "No, yeah, I do. I ain't answering shit."

(Previously, however, he'd already told the first officer he stole because he was hungry and exclaimed that "he ran away because 'Why not?'")

Handcuffed on the ground, he became despairing to the extreme, yelling, "I just want this to end!" and then declaring he wanted someone to kill him. He was placed in the back of a patrol car.

The items he'd stolen (a bag of chips, a container of nachos, a bag of donuts and the Polar Pop) had a total estimated value of $11.40. At the time of the report, the subject hadn't been proven involved in the indecent-exposure case that had first gotten him noticed—so if he hadn't fled the scene after shoplifting, he'd likely have walked away with a simple citation.

Instead he was taken to jail, where one can only hope some corrections officer took pity on him and gave him a bite to eat.