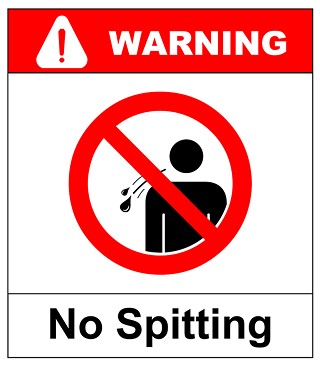 A drunk and disorderly college man readily revealed being a total, well, jerk—but doggedly denied spitting on two female peers, according to a University of Arizona Police Department report.

Two officers responded to the La Paz Residence Hall, 602 N. Highland Ave., regarding a disorderly-conduct incident. The dorm's resident assistant said two young female students had complained to her that, as they'd been walking along a much-used pathway outside the building, a young man had leaned out from the balcony of a certain room above and proceeded to spit on them.

The cops went to the specified room and spoke with its resident, whose slurred speech, red eyes, and poor balance indicated intoxication—as well as "changes in mood from being confrontational to compliant."

He emphatically rejected the accusation of spitting on anyone from his balcony, adamantly insisting he'd just been out there smoking cigarettes and that while he had purposefully ejected saliva from his mouth, it had definitely landed on the balcony's floor.

Concluding the interview with the officers, though, his tone changed as he admitted to drinking a notable amount of alcohol that evening. (He was verified to be of legal drinking age). He followed that up with a simple self-loathing yet matter-of-fact statement: "I'm an alcoholic and a dickhead."

The alleged loogie targets declined to press charges and the subject was left alone in his room after promising officers he'd stay there (and not spit on anyone).

Unfortunately, just 43 minutes later, he'd obviously become even more inebriated. While he'd indeed stayed in his room the whole time—and refrained from projecting any bodily fluids onto another person—he'd become quite belligerent. A woman who lived in the dorm reported she'd heard him banging on his walls and a door, as well as breaking a glass door. She said she'd been bothered by past drunken outbursts of his and didn't feel comfortable living in the same residence hall.

This woman announced she did want to press charges—but since she didn't demand he be arrested that night, he was again left alone.■

A year after first case in Arizona, COVID-19 is now a leading killer