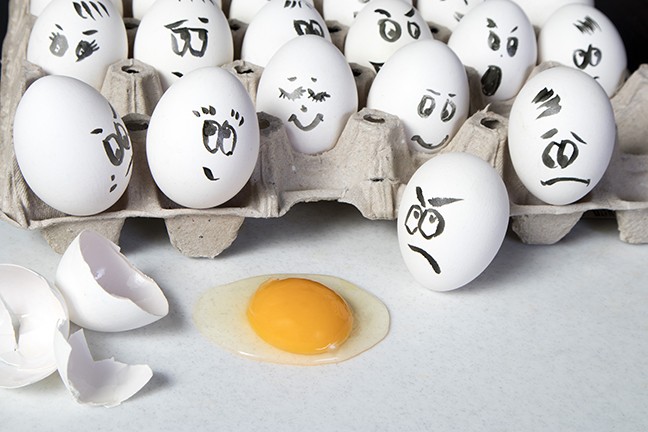 A man went on a mini-rampage after being fired from his job at a quiet north-side brunch café, according to an Oro Valley Police Department report.

An OVPD officer responded to a First Watch breakfast-and-lunch establishment whose manager told him that morning she and two higher-ups at the restaurant had a "termination meeting" with a male (now former) employee in a rear dining room. Once he understood he was fired, she said, he started yelling and being confrontational, startling customers in other dining areas. After they finally herded him into the kitchen, he upended a large container of sanitation cloths, which spilled across the ground.

Finally he "stormed out" the back door and drove away—only to repeatedly call the restaurant, demanding to "speak with a supervisor" but refusing to give a reason. (He also refused to identify himself, but his identity was pretty obvious.)

The reporting officer drove to the man's residence, calling for backup after being told the subject was known to fight with police and "barricade himself to prevent apprehension."

Three officers converged on his house and could see him through the windows completely ignoring them pounding on his door. Several times the reporting officer convinced him to open one door and talk—emitting a boozy stench—but he wouldn't chat for long, each time quickly withdrawing and slamming the interior door in the officer's face.

Eventually officers saw him inside on the phone with his probation officer, who convinced him to go outside. After being read his rights, he ignored all questions and just started "obnoxiously yelling out loud, 'Lawyer!'" over and over.

Officers were able to turn him around, handcuff him and put him in a patrol vehicle. As he was being driven to jail, he kept asking "Where are we going?" "Why am I going to jail?" and variations of that theme. He was booked on disorderly-conduct charges and would later face consequences for drinking against probation restrictions.