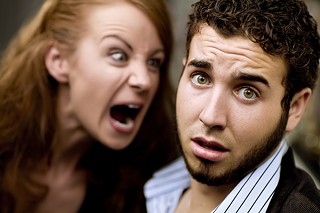 A couple having some relationship problems admitted they'd been flinging insults—and at least one sock—back and forth during an argument, but neither half got in trouble after they both insisted this was pretty normal for them, according to an Oro Valley Police Department report.

A neighbor called the cops after hearing the male-and-female couple in an adjoining apartment start "yelling and screaming." The reportee had distinctly heard "the f-word" followed by the exclamation, "Ow!"

When officers arrived on scene, only the female remained in the apartment, saying her live-in boyfriend had just walked out. She said they'd been arguing because her boyfriend was angry about a voicemail left by his mother that afternoon.

After hearing his mother's voicemail, she said, the boyfriend was "not happy" and called the girlfriend a "fuckin' retard," which incited them to "both start screaming obscenities at each other." She said her boyfriend kept calling her names and at one point, he threw a sock that hit her on the head; he then left the apartment to "cool off."

Deputies found him in the complex's parking lot, where he admitted he'd thrown a sock at his partner "out of frustration," but he thought it hadn't struck her.

Either way, it seemed, she hadn't been injured. Both parties insisted neither was hurt, no property was damaged, and "they were just yelling at each other."

Officers then mentioned the fact that their apartment was in extreme disarray, as if more household objects had been tossed around. But the couple "stated they were just messy and it was not out of the ordinary."

It was decided that no arrests would be made, but that the boyfriend should sleep somewhere else that evening. He was picked up by his mother.