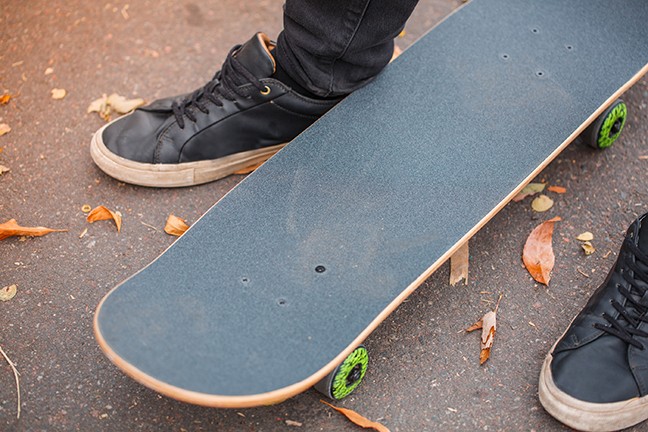 An unlucky man felt the wrath of an irate teenager who used his skateboard as a tool of revenge against the man's car, though the man's perceived misdeed was as accident, according to a Pima County Sheriff's Department report.

A sheriff's deputy responded to a normally quiet north-side neighborhood where the driver said the incident occurred. He told the deputy he'd just been driving down the street when he suddenly heard a loud bang, realizing he'd run over something—and while that occurrence alone had probably already caused damage to his car, the vehicle was about to experience much worse.

After pulling over a little ways down the street from where he'd run over the object, he said, he looked up to see a very angry juvenile male suddenly at his window, screaming, "What the fuck are you doing?!" and then swinging a skateboard in the air and slamming it down hard on his car's hood.

The pubescent perp and his friends were still on the scene, having been skating in their neighborhood street and using a "bar frame" they'd set up there—which was what the man had run over. The subject had not been happy about that, he admitted upon interview (during which he didn't seem exactly remorseful).

He told the cops that while the bar was in the middle of the road, the "older gentleman" had hit it with the bottom of his car's bumper and had dragged it down the road, not stopping immediately. He said he'd called out, "Yo, stop!" but the man hadn't stopped right away, so "he got mad and (his) first reaction was to hit his car."

"You know," he said, "what this guy is doing is driving down my street and running into my stuff."

The reporting deputy informed him that his "stuff" had been in the middle of the street where people are supposed to be driving—and besides that, it was creating a hazard.

He charged the young man with criminal damage and told his mother a probation officer would be in touch.