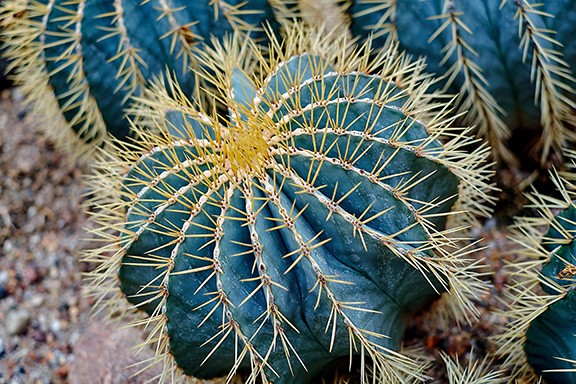 A drunk woman covered in cactus thorns was arrested for jumping in people's yards, according to a Pima County Sheriff's Department report.

After multiple midnight calls from residents of one north-side neighborhood, sheriff's deputies visited a few of the reportees, who said a woman was "stumbling around the area" and had invaded their yards seeming "very intoxicated."

One home's residents said the woman had evidently fallen in to a big patch of cholla cactus, since she had spiny pieces of it "covering her legs," and now their fence—which she'd evidently climbed to get into their yard, where she'd been making a big racket—was also covered with cholla.

Another reportee told deputies the woman had been living with him recently, but he'd kicked her out "due to her being intoxicated and hard to deal with"; that night she'd broken into his yard and spent a long time screaming outside his trailer and banging on his door.

One deputy found the woman sitting cross-legged on the ground. When she began to talk, he observed she was slurring her words; couldn't walk or stand properly; displayed wild mood swings; and had red, watery, bloodshot eyes. Heedless of the late hour, she told him she'd just been walking her dog, which had "chewed through its leash," so now she was walking around looking for it.

As this deputy was driving her to jail on charges including disturbing the peace, she became enraged, screaming profanities and saying "he was going to burn in hell along with (his) wife and children." She finally quieted down enough to be booked.