It's Not a Machete, Already! 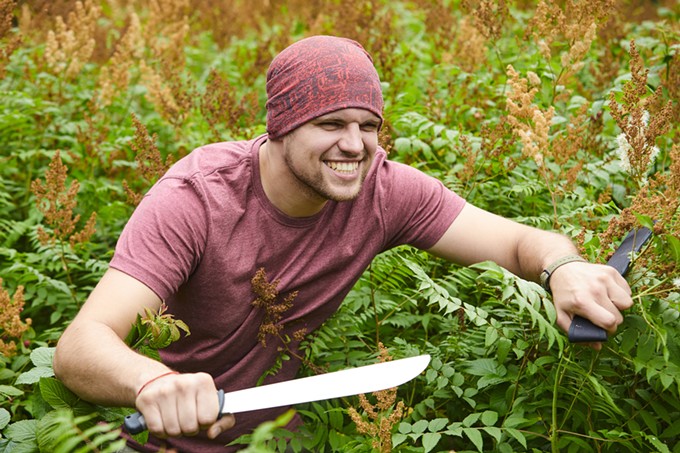 You need a machete these days to keep kids off your lawn.

A man appearing to brandish a "machete" against some northside teens caused a wave of fear in the Foothills—but as it turned out, the subject was simply a homeless person camping in the area who'd been trying to defend himself against the youngsters while holding a homemade gardening tool, according to a Pima County Sheriff's Department report.

One Sunday evening, "many units" of deputies in patrol vehicles responded to North La Canada Drive and River Road, where a caller had described a man on a bike "with a machete who was threatening three or four people ... screaming ... [while they] were trying to get out of the way."

One deputy interviewed the people described by the caller: four teenage males found on foot nearby. They told him a man riding a mountain bike with a "green basket" attached to it (apparently a milk crate) had approached them from behind and pulled around to stop them from crossing the North Flowing Wells bridge while yelling, "I run these roads!"

They said that three times, the man "ran toward them and they ran back," then started yelling "a bunch of crazy stuff like, "I'm going to kill you!" and "I'm going to knife you!" and also "spoke of being a Satan worshipper."

He'd allegedly raised against them a 2-foot-long weapon with a curved blade—again, resembling a machete" (as the original incident reportee had termed it)—and at one point had mentioned having a .22 handgun in his pocket. The teens said when they told the subject to "leave them alone," he replied, "I fucked your mom."

Three days later, deputies located a man believed to be the subject at a campsite in a dirt lot near a northside Whataburger restaurant. This man matched the subject's physical description, possessed a mountain bike like the one described by the boys—with a big green milk crate attached to it—and at his camp was found an object distinguished as a large stick attached to a long, curved blade apparently taken from a pair of hedge clippers (e.g., his "machete"), whose purpose, he said, was clearing vegetation at his campsite.

The man said he'd indeed met the teens a few days prior—on a bike path near the aforementioned bridge—but he'd only been trying to ride down the path when they refused to let him pass, instead starting to curse at him.

At that point, he admitted, he began to curse back—and he did take out his "machete"-like gardening tool to appear more threatening. At that point, he said, the teens demanded he drop it "so they could fight him."

Deputies determined this man had only been defending himself from the teens, who'd outnumbered him, and he'd "had little opportunity to move around." No arrest was made.