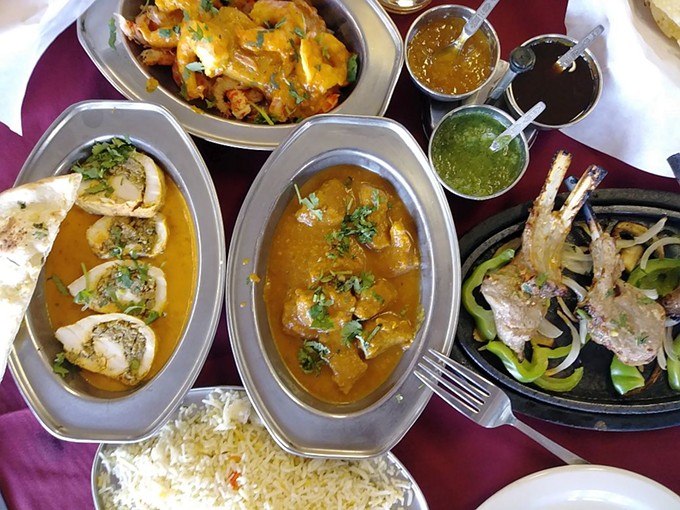 What is it, exactly, about strip malls and fantastic food? Los Angeles literally prides itself on some of the tastiest and most exotic food coming from a hidden storefront, sandwiched between a vape shop and a bodega. It's kind of the same here in Tucson. One of my favorite places to grab a slice is in a strip mall. Same goes for sushi, Mexican food and a deli. In an urban sprawl with rent (especially for restaurants) hiked up to "are you kidding me?" prices, one can actually land a decent business among a throng of like-minded owners in a stretch just off the main drag.

Oro Valley is really lucky because they have such a spot going by the name of Flavor of India. I was in that territory for some Fourth of July festivities with friends who are well aware of my Indian food obsession. They told me I'd find my fix here so I had to stop by and see if they were correct.

When I spotted the location, I breathed a sigh of relief. Oh good, it's in a strip mall—we should be OK.

Upon entering the large room with each table expertly awaiting guests with fanned napkins and heavy flatware, I suddenly got a slight sense of déjà vu. When I made my acquaintance with the owner, Harjinder Singh, he informed me that he is related to the owners of the restaurant Gandhi, at the corner of Prince and Stone (yes, in a strip mall), so the set-up is pretty similar. They all hail from various townships in the Punjab region of India, which usually relies on lots of cream and slightly less spice in their cooking, comparatively, so my taste buds were prepared for a trip to Northern India.

What I really love about family-run businesses such as Flavor of India is the happy diversity with the relatives who work there. Harjinder was busy between running the floor and running out food. Uncles were in the back cooking. Wives were manning the bar and answering phones while the children, who obviously would rather not be working all summer, reluctantly filled water glasses and cleared plates while intermittently staring at their devices. It was a joyful dance and it made the handsome restaurant feel a little like a family gathering.

The Lamb Samosas ($3.75), packed with spiced chopped meat and peas, were awesome. There was a perfect fry on the exterior, and the interior was sumptuous without being too filling. As were the Spinach and Onion Bhaji Pakoras ($3.99), which balanced the meat-heavy first appetizer with a creamy veggie lightness.

The Mango Lassi ($2.99), always a favorite of mine, was spot on: an expert blend of fresh mango, milk and Indian yogurt. Always have a drink such as this as you dine on Indian cuisine, especially if you like your dishes hot, as I do. They also serve two of my favorite Indian beers in large bottles, Taj Mahal and Kingfisher, and they have select wines available and a full bar as well, if you're into that sort of thing.

I'm not usually a fan of Indian fish dishes, but I will say the Jalpari Macchi ($13.99) was really fun. It was kind of unexpected to find so many crawfish and shrimp hiding beneath a large cut of whitefish that was doused in a fragrant tomato-and-onion gravy, but it made the dish complete and syncopated so well. This seafood option has now made me a fan of Indian fish plates.

Of course, they have the British invention Chicken Tikka Masala ($11.99), which was subdued yet really enjoyable. But you should seriously give the Chicken Rogan Josh ($11.99) some attention. The chicken had a smoky element to it, which was interesting, but paired with tomatoes and onions that are cooked with distinct Punjabi spices in a subtle curry sauce was an absolute hit.

Luckily for those who steer clear of food that had faces, Flavor of India has a tasty selection of vegetarian and even vegan items. The Mutter Gobi ($9.99), just a simple blend of peas and cauliflower, seasoned perfectly with their house spices, was a nice break from the meat, as was the Aloo Saag ($9.99), which had potatoes cheerfully swimming in a delicious creamy-spinach sauce.

The Naan bread was tasty too. They don't hold back with the garlic in the Lasuni Naan ($2.75) that would make any Italian mama jump back just a little from its pungency.

After I said my goodbyes to the Singh family, I felt a little sad. Not that I wasn't full and extremely satisfied, it's just that I live so far away, and they became a temporary family to me, inviting me into their lavish home to eat home-cooked food. Guess I'll just have to come back and make it a reunion someday.