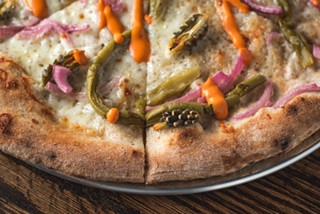 All it took to connect the Rillito River to the Mediterranean Sea was a shared respect for Old World wisdom and an abiding love of hometown, plus a little inspiration from Uncle Joe.

This confluence of culinary cultures is now on display at Zio Peppe, a new restaurant co-owned by Tucson natives and longtime chefs Mat Cable and Devon Sanner. The name of the eatery at 6502 E. Tanque Verde Road was inspired by Cable’s Uncle Joe – Zio Peppe in Italian – Joe Sottosanti, who opened Tucson’s first Sicilian pizzeria four decades ago.

“Uncle Joe is a trailblazer,” said Cable. “He never talks before he thinks and there’s a certain seriousness in him, even when he smiles.”

When Sanner officially met Uncle Joe, his impression was consistent with the image portrayed through the series of vintage Sottosanti photos that adorn the restaurant walls.

So how do you get a trailblazing spirit, a serious kind of smile, and a certain swagger on a menu that marries Sonoran and Italian customs? I’m glad you asked.

Zio Peppe’s Elote Arancini is a Sonoran take on the classic Sicilian street food. Charred corn, queso fresco, and lime crema are the chefs’ hometown touches to these fried risotto balls that have defined Sicily’s culinary story for generations.

“We knew we were going to do both arancini and street corn on different parts of the menu, but when we put them together in experimenting with this dish, we looked at each other and said, ‘well, that settles that,’” said Cable.

The Lasagna Sonorense is another dish that Sanner said “works through analogues.” In place of the traditional veal and pork Bolognese and marinara, they use house-made chorizo and red chile sauce, along with poblano chile con queso, spinach, and ricotta.

“This lasagna has a little earthiness from the guajillo chiles and richness from the poblano chile con queso that give it a slight piquancy along with some depth,” said Sanner.

The centerpiece of the Zio Peppe space is a unique gas and wood-fired oven with a rotating stone hearth, which tells me that pizza is a central part of their story. And several of the Neapolitan-style pizzas symbolize the Sonoran-Italian connection.

“I’ve done pickled cholla buds in other guises for some years now, and Mat and I decided to do something fun with them,” said Sanner. “We ended up using pepperoncini brine in the pickle, and it was like magic when we tried it. The natural artichoke and asparagus flavor profile of the cholla buds played well with the sharpness of the brine.”

Cable concurred. “When we pickled the first batch of cholla buds in that brine, we probably ate about $30 worth of them, one after the other,” he said. “They were that good.”

Cable and Sanner are as much about praxis as they are about playfulness, and several dishes on the menu are intended to suit more traditional palates, such as their classic Margherita pizza, Fettuccini Alfredo, and Caesar Salad.

Zio Peppe is open for take-out and delivery, with plans to open the dining room this summer as staffing allows. You can access the menu at www.ziopeppeaz.com.

As noted, Uncle Joe never talks before he thinks. After sitting down with Mat Cable and Devon Sanner, I’d suggest the same is true for Zio Peppe.