Minuses: Sauce is quite sweet

Minuses: Too much cheese on the meatball sandwich

Pizza is the perfect food. Problem is, everyone has their own ideas about what makes pizza perfect.

We recently visited two pizza parlors that differ on many levels. From the style of pizza to the décor to the vibe, Vito's Pizza Kitchen and BZ's Pizza prove that one person's perfect pizza is another person's ho-hum pie.

On Vito's website, the pizzas are described as "a slice of New York heaven." That's a bit of an overstatement, but the food here has a definite East Coast feel. The pizza comes in three sizes—12, 15 and 18 inches—with offerings including about a dozen specialty pizzas, classic pies and the option to build your own, with just about every topping known to humankind. We went simple and got a 15-inch pepperoni ($14.50), because the less you have on a pizza, the easier it is to judge its worthiness.

The not-too-thick, not-too-thin crust was cooked to a golden crispiness. It didn't have that chewiness that I think of when I think of New York pizza, but it's hard to complain about a crust with such a nice crunch.

The sauce was too sweet for my taste, but the savory cheese saved the day: There was plenty of mozzarella, and it had been baked to deep golden brown. One personal quibble: The pepperoni was under all of the cheese; it was almost invisible. I like to see my toppings, although I'm sure others don't care.

We also ordered the antipasto salad ($9.50), which is certainly enough for two or more. Romaine lettuce was topped with lots of slices of provolone, pepperoni and salami, as well as black olives, green peppers, red onions, a few bites of tomato (very few) and several pepperoncini. Dressing was served on the side, and while the dressing was pretty typical, it wasn't overpowered by too much seasoning or oil.

Vito's offers clever pasta selections called torpedoes: Sheets of pasta are rolled around meat or vegetables, topped with sauce and cheese, and then baked. There's a sausage or meatball torpedo ($10.50), a chicken Alfredo torpedo ($10.25) and a primavera torpedo with veggies, ricotta and Alfredo sauce ($8.75).

We ordered the meatball torpedo. This dish was a little disappointing in spite of its enormous size and the spicy, tightly packed meatballs. The pasta was on the verge of being overcooked, and the mozzarella on top could've been browned a little bit. Great idea, poor execution.

Dessert was a house specialty, the chocolate tower cake ($5), which consisted of six layers of moist, rich cake, topped and layered with a dark fudge-like frosting. For anyone who loves chocolate, this would be a heavenly choice.

The place is small, with the open kitchen taking up almost as much space as the dining area. Service was spot-on and friendly, especially considering there were only two people working: one in the kitchen, the other dashing in and out to drop off pizzas.

There are imported and domestic beers, and a limited wine list typical of a pizza joint—in other words, nothing too fancy.

Across town, BZ's offers pizza that some would call "gourmet."

BZ's crust was thin, with a nice chew and tiny air bubbles throughout. The sauce was rich, smooth and cooked to a T. Time and care clearly go into the prep of the all the food here. There was plenty of quality cheese and large slices of pepperoni. Flavors, texture and taste all came together perfectly.

The gorgonzola salad surprised ($6.99). We split it but each got a generous portion of fresh mixed greens, roasted red-pepper strips, tangy crumbles of gorgonzola and pine nuts.

The meatball sandwich ($8.99) was enormous. The meatballs had a nice texture and were seasoned well. They were topped with the same sauce that was on the pizza, and—dare I say it— too much mozzarella and provolone cheese. The crispy bun held up under all that filling.

We took the cannoli ($3.99) home for dessert. The waiter described them as "pretty awesome," and while I might not go that far, they were yummy. The filing was thick and creamy, with a nice balance of sweet and tanginess. Chocolate syrup was drizzled across the top, and two sweet raspberries sat alongside.

The decor at BZ's Pizza is open and modern, with mixed colors on the walls, pictures from Italian mob movies scattered here and there, and a huge neon chandelier above a communal table. A mix of tables and booths provide the seating options.

The service was great; everyone was friendly and helpful, and the music was appropriate for a hip neighborhood pizza parlor. Beer and wine are both available, as are daily pasta specials.

BZ's is more of a family place, whereas Vito's is an ideal spot for groups of friends or the single diner. (A slice can be had for as little as $3.) While BZ's serves pizza that is more in tune with my tastes, Vito's pie surely will have plenty of fans. 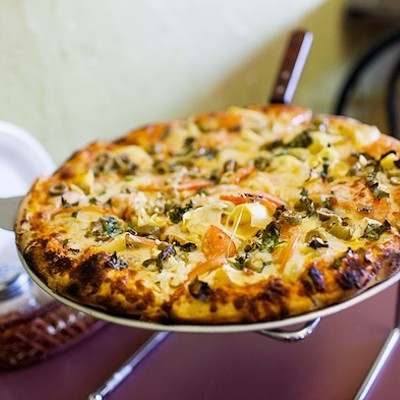