How going to Woodstock changed my life 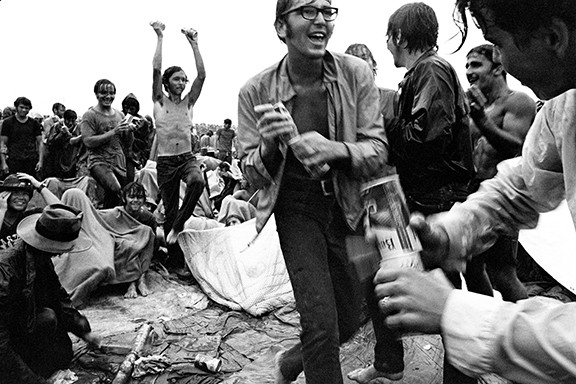 Tim Fuller
Rain did not dampen the spirits of these Woodstock attendees.
My life as a freelance photographer was made possible because 50 years ago, I managed to talk my way into a backstage pass at Woodstock.

The story begins one Friday night in the spring of 1969. I was taking photographs for my own pleasure at a Byrds concert at the Hollywood Bowl in Los Angeles. After the show, a guy came over to me and told me that he was writing a review of this performance for the Long Beach Free Press. Thrilled, I gave him my three rolls of Tri-X and told my friends about my upcoming good fortune.

The next Monday, I called the Long Beach Free Press to ask about the review. They knew nothing about it and even less about the guy that had my film. I was pissed. I vowed to not be so naïve next time and hoped at least I'd learned a lesson that would serve me well down the line. I had, but in a way that I couldn't have ever foreseen.

Tim Fuller
Grace Slick staring out over the crowd at the start of Jefferson Airplane’s set.

Fast forward to summer in New England. I was living in Cambridge, still carrying a camera where ever I went. In addition, I had a wise and zany Irish-Catholic girlfriend and a VW van. One day, she mentioned she wanted us to go to a concert in upstate New York. She didn't know what it was called but she'd been told there would be a lot of amazing bands playing. When we got within three miles of the site, the road became so clogged with people and cars that we had to park the van by the side of the road. We hopped out and began walking the narrow country road, surrounded by a river of longhaired guys and girls in long dresses.

By the time I got to the front gate, it was clear that something amazing was happening. I immediately realized I wanted get as close as possible to what was going on. Remembering how I gave away my film to the fake reviewer at the Byrds concert, I went directly to the press office and told them that I was the photographer from the Long Beach Free Press and that I needed to pick up my credentials. 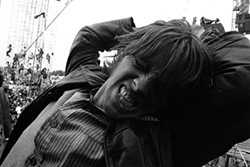 They, of course, had no record of such a request. I, of course, feigned shock and chagrin at having come all the way across the country only to find no stage pass. For the next few hours I was passed from office to office until finally I found myself sitting in a folding chair outside the door of the woman who was ultimately in charge of all press credentials. I watched a photographer in a leather jacket with multiple Leicas swinging from his shoulders walk in and kiss her cheek. In a charming English accent, he asked for his pass. I peered around through her office door and noticed her pull open a drawer, reach in and give him a stage pass.

When she emerged from her office, I repeated the story of my cross-country trip and the missing credentials to her.

Tim Fuller
Joe Cocker was getting by with a little help from his friends.

"If I can find a pass, I'll give you one but I don't think there are any left," she said.

She walked me into in her office and opened a different desk drawer. There were no passes inside. "Sorry I can't help," she said.

But I'd seen the draw where she kept the passes so I pointed to it and asked, "How about there?"

She looked at me. I looked back at her. She sighed. "Alright, I can't give you a stage pass but I'll give you a backstage pass."

I had a camera, three lenses, and five rolls of Tri-X. I was in heaven.

A band called Sha Na Na was playing little before dawn on the last night. I wasn't crazy about their music and after their set, exhausted and groggy from sleeplessness, I started to walk away from the stage and the crowd. There was a barn I had slept for a few hours the night before and I thought I might find room there to crash.

As the sun cracked the horizon behind me, Jimi Hendrix had started to play the opening chords of the Star-Spangled Banner. Jolted, buzzed and gasping, I turned and ran for the stage. 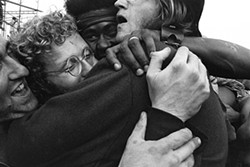 The bouncers who guarded the stage were gone, their attention drawn to Jimi creating those magic sounds. I took less than a half dozen shots of him that morning. (Remember the five rolls of Tri-X?). The first shot was from behind the amps at the back of the stage so if I were kicked off, I'd have something. Then I threaded my way to the right of the stage for a better view. The last shot captured Jimi leaning slightly back, picking a note with the diagonal drape of the stage roof/tarp behind him. He is in the moment with his eyes closed and what looks like a joint hanging from his lips.

And, as would happen so many times for the rest of my life, I felt the sheer joy of losing myself in the moment, looking through the lens of a camera.

I loved making that photo, but no more than I loved the photograph I made the day before of four young men embracing each other, shot very tight with only a small view of a speaker tower behind their joyous faces. I was as star-struck by the people all around me as I was by the musicians.

Tim Fuller
When it got too wet to safely play on the stage, some non-musicians took over the entertainment duties.

These photographs were never published. I adored the act of making the photos but had no idea how to "market" those images. I don't think that use of the word "market" was even in my vocabulary at that time.

But having those images in my portfolio got me my first job on a newspaper.

A year or two after Woodstock, I was studying photography at the San Francisco Art Institute and decided that I wanted to do this professionally.

But I had no idea where to begin this quest. I knew no one that made living from taking photographs. I figured newspapers and magazines must pay for photographs. In my naiveite, I imagined that if I were to return to the University of Arizona and study journalism, I might discover how that process worked.

The journalism advisor who interviewed me was slightly bewildered when I explained why I wanted to study in their department. He explained that it was a writing program. I said I liked to write. 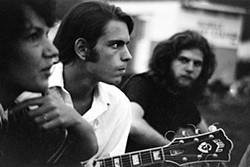 Then he said that if I really wanted to learn about photojournalism, I should apply for a job at the Arizona Daily Wildcat. He mentioned it had the fifth largest daily circulation in the state. Not only that, but they paid salaries!

The next day I put together a portfolio with a dozen or so Woodstock images and headed over to the Wildcat newsroom to ask for a job.

Barely looking up from her typewriter, the managing editor explained that all the positions were filled and I should come back next year. On my way out the door, I passed a student who worked at the afternoon daily Tucson Citizen who was hanging out with friends in the newsroom. He saw the portfolio I was carrying and asked to see my work. After looking at the Woodstock images, he marched into the main editor's office with me and my portfolio in tow and told her: "Hire this guy." She did.

At the Wildcat, I learned how to shoot on assignment and how to walk out a door with a camera and come back with a black-and-white, two-dimensional image that told a story.

Tim Fuller
Rain did not dampen the spirits of these Woodstock attendees.

I loved newspaper work. I became the photo editor the next year and that was followed by working summer internships at the Tucson Citizen. After my third summer of interning, the paper decided they could no longer hire me as an intern, as I was no longer in college. I needed to find another way to make money.

In those days, my love of photography was balanced by my love of performing. I had helped launch the Invisible Theater, which at that point produced all original work and I was married to a dancer who was in the process of starting her own dance company, City Dance Theater.

I began shooting for them and then Arizona Civic Theater (later to become Arizona Theater Company) and soon after that the Arizona Opera Company. It wasn't long before I was shooting for performing arts companies all over the state.

At this point in my career I have shot on assignments for editorial and corporate clients in 10 different countries and 43 states but I continue to shoot theater and dance.

It makes me smile to think that this happy life began when I shot that concert in Bethel, New York.