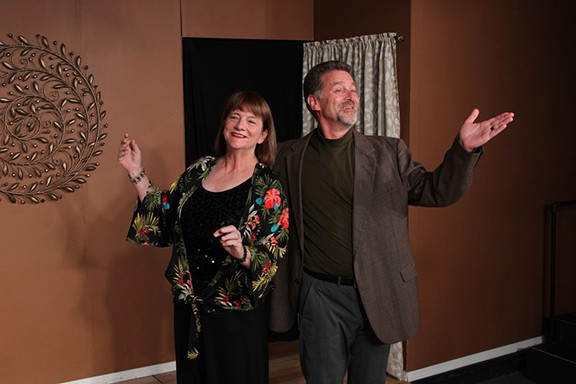 Show People, by Paul Weitz, is a love letter to theatre. Or possibly hate mail. Live Theatre Workshop's production dives whole-heartedly into the play's metatheatrical examination of the performing arts, acting and the theatre industry. Under Chris Moseley's direction, Show People adeptly shifts gears between celebratory and elegiac as it delves into the highs and lows of the lives and careers of actors. Plot twists abound. It's a fun, if occasionally dark, play, and audiences ought to be aware in advance of its self-consciousness and self-referential theatricality. These traits reach a maniacal pitch near the end of the play, so make sure that if you go, you're willing to be in on the jokes.

The play is a tight, fast romp—90 minutes with no intermission—following two late-career actors, Marnie and Jerry, respectively played by Lesley Abrams and Steve McKee, as they meet a young man, Tom, who has hired them to play his parents in order to introduce them to his girlfriend, Natalie. While Marnie and Jerry work self-consciously to inhabit their parental characters and flesh out their roles on the fly, they're thrown curve after curve by Tom, played by Taylor Rascher, and Natalie, played by Emily Gates.

All four actors are delightful in their roles: lively, deeply layered, and with excellent chemistry amongst themselves. Abrams was hilarious perfection as Marnie, giving everything from strident cynicism to loving warmth with impeccable comedic timing. I found myself watching her even when other characters were speaking; her physical reactions and facial expressions were a highlight in a uniformly strong cast. As Natalie, Gates provides a more naively optimistic counterpoint, bubbling with undimmed enthusiasm even as Abrams lobs backhanded remarks. McKee skillfully melds Jerry's self-indulgence with bewilderment and, in a few especially evocative moments, even aching sadness. Rascher shines most in the moments that make the audience uncomfortable, as he—and we—struggle with the lines between reality and fiction.

The comedic meditation on acting and theatre is layered, calling attention not only to the professional craft, but also the more mundane performances people put on every day, particularly in situations when they want to impress or endear themselves to others. These moments range from painfully relatable awkwardness to laugh-out-loud absurdity. While likely all audiences can relate to some of these elements, such as the act of telling someone you like their baking when you don't, those who live and work in the performing arts will find that this play speaks directly to them, for better or worse, from start to finish. The play ruminates on the joy of acting, the drive to perform, the need to be in the spotlight and, more bleakly, on the harsh reality that chasing that spotlight can be a heartbreaking endeavor.

Despite the unflinching discussions of poverty and hardship, an idealized vision of the theatre is present as well. The play reiterates that creation and performance are labors of love. "The stage is a place that demands empathy," the audience is told, and so it does.

Show People clearly loves actors and artistic creation, but has no illusions about their world. In one anecdote about playing a horse and doing so topless at the director's insistence, the audience is briefly confronted with the harsh reality of the exploitation of women in the theatre industry and the power dynamics between directors and aspiring and/or under-employed actors. The story is brief, but searing. It encapsulates both shame and desperation, condemning the situation even as it elicits sympathy and understanding for the individual having made the choice to go ahead in such a role. The anecdote is a minor moment in the play, but it continues to resonate long after. It is a jarring reminder of the coercion that can and does occur. This reminder should not go unheeded—we as participants in and consumers of theatre must demand ethical practices in which all participants are treated with dignity and respect.  ■