Our sports guy cleans out his reporter's notebook

Not all topics deserve thousands of words. Bill Simmons and his loquacious Grantland site would disagree, and do so at great length.

There are plenty of great stories and items of note out there in the local, regional, national or international sports world that bear mention, but not necessarily a lot of mention. The same goes with opinions and observations, some of which can quickly be summed up with just a few words.

It's what makes Twitter such a great tool, even though so many people-especially certain local media members-grossly misuse it.

This is all just a roundabout way of explaining (and contradicting my argument about brevity) that over time my brain begins to get cluttered with an accumulation of random thoughts. Some of them are probably worthy of an entire column, but we're taking the lazy approach this week and instead present to you an assortment of ... sports head cheese.

Arizona Stadium's comfy new seats: I've expounded several times on the Weekly's blog, The Range, about me purchasing season tickets for University of Arizona football in the new North End Zone area. On Saturday I got a chance to, um, sample the merchandise during an open house of the new area along with parts of the Lowell-Stevens Football Facility.

All told it cost $570 for two seats, complete with seat backs, armrests and cup holders, not to mention a nice, open-air concourse just behind and above, which includes what appears to be a large and roomy concession area. Let's just hope the El Charro Super Nachos are sold up there.

Jersey price-gouging: Now, while a conveniently placed college football viewing spot is worth the price in my book, one of Arizona's fancy new Nike jerseys is by no means a smart business decision.

The red and blue versions are on sale at the UA Bookstore for $90 each. Make that $120 if you'd prefer the "authentic" type, rather than the "replica" version, which pretty much just means you're paying an extra $30 to have Jake Fischer's #33 stitched on instead of ironed on. Yup, Fischer—he of the growing list of plaintiffs in a lawsuit against the NCAA for unpaid use of players' likenesses and numbers in video games and other for-profit material—is the only one available in the bookstore.

You'll probably need to pay extra for other players, increasing the unworthiness of these new unis, especially since the shoulders (adorned with 'gradient' stripes of red or blue) feel like cheap Pop Warner football jerseys.

I'm gonna pass on the new gear. Let's call it part buyer's reluctance, and part my longstanding displeasure with the fact the UA still hasn't made the awesome red baseball jerseys available for sale.

Arizona State's insane jealousy: Growing up, it was fair to say I was not happy when I learned I was going to have a baby brother. I didn't want to have to share all of the things that came with being the only child, not to mention the only boy. But I eventually learned to accept the fact that he was going to be around for good—despite my best efforts to the contrary—and we learned to co-exist.

ASU is going through the same thing right now, but it in effect is trying to get its' until-now-ignored little brother shipped off to boarding school or juvenile detention.

Why? Because Grand Canyon University is moving to Division I in NCAA basketball. ASU president Michael Chow is doing everything to try and stop this for fear that his school's athletic program, which is already struggling in the competitive Phoenix-area marketplace, will lose paying customers to a private, religious, for-profit institution with a swanky central Phoenix location.

Chow has gotten the tentative backing of most Pac-12 Conference schools in an effort to block Grand Canyon's move, saying it's not right that a school that is profit-driven should be at the top level of competition for any sport. This from the school that plays hoops in Wells Fargo Arena and hosts the Buffalo Wild Wings Bowl.

The real truth to this move is that ASU, knowing how hard it already is to compete with Arizona and other invading schools for Phoenix-area basketball recruits, fears that even the smallest of success from GCU hoops (powered by former Suns dignitaries Dan Majerle as coach and Jerry Colangelo as financier) will mean the Sun Devils likely end up being third fiddle behind the UA and the Antelopes.

Suck it up, ASU. Welcome your new little brother that you didn't know was around until now, and beat the crap out of him for as long as you can before he becomes too big (read: successful) to push around. Take it from an older brother.

Summer League success!: Speaking of the Suns, the formerly top-level NBA franchise has made headlines during the off-season for things that essentially mean nothing if they're not followed up with in-season success.

First up was Phoenix's placement in the NBA Summer League championship game, where it ultimately lost to Golden State to wrap up an 8-2 slate of games played in Las Vegas. There was TV coverage, not to mention far too much mention of these games on Twitter considering they only included rookies and untested players, but those connected to the Suns considered it a milestone achievement. To finish second. In a meaningless competition.

More notable, in terms of possible future success, have been the moves Phoenix has made to effectively be even worse this season (worse than going 25-57) in hopes of getting another high draft pick for 2014 and maybe, just maybe, be decent again sometime soon. To further that cause, serviceable forward Luis Scola was traded to Indiana last week for two stiffs and a draft pick.

So far new general manager Ryan McDonough is making all the right moves, but whether the Suns' fickle (and dwindling) fan base can wait out the rebuilding project is unknown.

Shameless geek note: If you don't know who Nate Silver is, you must not be a statistics and numbers guy like me. Silver is a world-renowned stat geek who, among other things, created a predictive program for determining Major League Baseball player success and has also nailed nearly every national political election over the past five years.

His book, The Signal and the Noise, is essential reading for anyone interested in how predictions are made and why most of them are made poorly.

Silver, whose blog Five Thirty-Eight has been on the New York Times website the last few years, is now switching over to ESPN, where he'll join the network's stable of experts and analysts by providing written and on-camera information related to how statistics and data factor into predicting sports futures.

I, for one, am all geeked out about this. 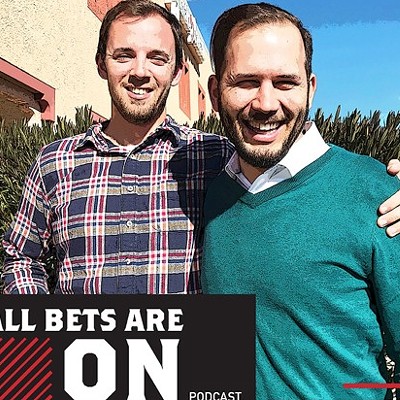 May 8, 2014
More »
More Credentials Pending »
All News & Opinion »
Comments (1)
Add a comment
Subscribe to this thread:
By Email