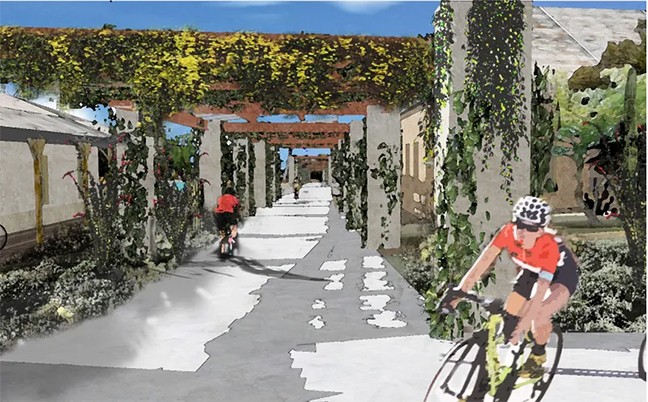 A 45-acre development for cyclists in Saguaro National Park East received the green light from the Pima County Board of Supervisors last Tuesday morning.

The Bike Ranch development, which is the brainchild of Tucson-based developers Kelley Matthews and her husband, Peter Lasher, was approved by a 3-2 margin. Supervisors Steve Christy, Ally Miller and Ramón Valadez voted for the granting of a mixed-use permit.

The property, which is located at 3700 S. Old Spanish Trail, is slated to be built within the buffer zone of Saguaro National Park-East.

The resort concept brought forth by Matthews and Lasher was previously presented in 2014, but was squashed after Pima County's development staff recommended the Board of Supervisors reject granting a variance to allow the project.

The opinions of the supervisors and audience members on the development, which was previously proposed and subsequently postponed before coming to a vote in 2014, were varied.

The conditional use permit the board approved includes a series of stipulations, including at least 50 percent open space, no on-street parking within public rights-of-way, no casitas taller than 25 feet in height and no outdoor sound amplification or public-address systems allowed.

Both Supervisors Sharon Bronson and Richard Elías spoke out against the proposal, with the latter taking great exception to the development.

"In many ways, I like the idea," he said. "I like all the specifics about it, but that doesn't cut it. So, it's about location and the location is problematic and there's nothing that you can do to fix that."

Christy said the proposed minor resort, which includes 49 casita-style rooms, a "bike barn" that will be less than 30-feet-tall, according to Matthews, as well as a 79-space parking lot, pool, outdoor seating and a private restaurant and a café open to the public, will serve the county well in the long run.

"I feel that this whole project has met the checkboxes of the rules, and the rules have been governed by regulations and refereed by officials," Christy said.

Matthews expressed a combination of relief and joy at the Board's decision, calling the announcement a win-win for Pima County at large.

"We always believed this was a really special location across from Saguaro National Park, and the Bike Ranch is a much more innovative proposal than just building more houses," Matthews said.

Matthews pointed to the resort's LEED Platinum certification, which is handed out by the U.S. Green Building Council, as proof of the couple's commitment to protect the delicate ecosystem surrounding the park.

That certification was directly cited by Pima County Hearing Administrator Jim Portner in his letter dated on April 12 that supported the development.

In his decision, Portner vouched for Matthews and Lasher's plan, rejecting opponents' claims that its construction would harm the surrounding area.

"In rendering a prior recommendation to deny the same petitioner's 2014 request, this Hearing Administrator clearly stated then that the vision behind the proposed use was found to have significant merit," Portner's decision reads. "Nothing has changed in this respect. The project as proposed represents an opportunity to further Tucson's growing national and international reputation as a cycling destination, and to do so in bold fashion. This is a positive for our community."

Portner said his decision was meant to leave no doubt about the county's stance on the proposal, eliminating any questions or concerns about why he vouched for the allowance of a permit to the property.

"People have tried to make this a case that people should keep this as empty desert because that's how it was when their homes are built. That claim is simply false," Hunt said. "The Bike Ranch doesn't threaten their property values. If anything, it'll probably help them."

Opponents, like Margaret Franz, expressed dismay that the board would side with commercial interests over those of the natural order.

Matthews hopes the development can bring the community together, serving as a boon for locals and tourists alike.

We're excited and grateful to Pima County and the Board majority for recognizing the benefits of the project for the whole community," Matthews said. ■