Pedal for the Medal

Just how bicycle-friendly is Tucson?

After Tucson scored a gold rating from the League of American Bicyclists last year, this city's two-wheeled fans started busting for the league's top-shelf, platinum imprimatur.

But others suggest we shouldn't pump our party pedals just yet. It seems that more than a few folks question just how bike-friendly Tucson really is. Among them is Erik Ryberg, an attorney specializing in cases involving injured bicyclists. He says local riders are routinely targeted by objects thrown from cars or arms swung out windows. Cars routinely squeeze riders up against curbs, or cut them off with careening right turns.

Feeding the problem, he says, are cops apparently not interested in doing much about it.

"It's that age-old problem of police sort of being behind the times as far as who they protect and who they don't. There's a residual prejudice toward people who ride bicycles over people who drive cars, and sympathy with drivers having to go out around bicyclists, or having to worry about bicyclists who don't ride rationally."

Ryberg backs his claims with several cases where bicyclists were assaulted by drivers, but no one was cited. In 2005, for example, a woman cycling on Campbell Avenue near the UA nearly wrecked after a guy in a passing car reached out and slapped her ass.

She regained control of her bike and got the moron's license number. But all that did her little good. According to Ryberg, the police traced the license to a post office box rather than an address. Then they called it a dead end.

Another of his clients was riding with a friend near Speedway and Columbus boulevards, when a soda can came flying from a passing truck. The cyclists caught the truck at a stop sign, planted themselves in front of it and dialed the police. Ryberg says the driver got out, huffed around and then jumped back behind the wheel. Through sheer luck, the cyclists jumped clear as he roared into gear. But their bikes were dragged for a block under that truck, before breaking loose in tattered pieces.

"I filed a complaint," says Ryberg. "And the police told me, 'We called your client, and she never called us back.' But apparently the police don't have the sophistication to know that when someone is being represented by a lawyer, they're supposed to call the lawyer."

He considers the rest of the story equally disturbing. "There was a whole line of witnesses who saw the whole thing. But when the (police) went to truck driver's house, the guy said, 'Well, I felt surrounded and had to flee.' So the police didn't cite him for anything. Meanwhile, he destroyed my clients' very expensive bike."

When Ryberg threatened to sue the TPD, police cited the driver for leaving the scene of an accident. The citation was issued on the very last day allowed by the statute of limitations.

To the attorney, all of this should be cold comfort for other cyclists facing the same situation. "I wanted that guy cited for aggravated assault," he says. "But the police wouldn't do it."

Several attempts to obtain comment from the Tucson Police Department were unsuccessful.

According to the Pima Association of Governments, minor cyclists' injuries have been dropping in recent years, as of fiscal year 2005 (a fiscal year runs from Oct. 1 to Sept. 30). Fatalities rose slightly, however, as did incapacitating injures.

But for several reasons, the number of cyclists assaulted each year is tough to gauge. First, the police department apparently doesn't collect such incidents within a bicycle-related database. Second, many incidents simply go unreported, And finally, there are the cases, described by Ryberg, where police are called, but no citations are handed down.

Nor is Tucson alone in this plight, says Elizabeth Preston, a spokeswoman for the League of American Bicyclists in Washington, D.C.

"There are five 'Es' we look for in judging a bicycle-friendly community, such as education and encouragement. Enforcement is also one of those 'Es,' and it's one of the most difficult ones--making sure that police are ensuring bicyclists' right to share the road."

Education is key to turning that around, she says. The learning process goes both ways--and includes cyclists who flout traffic laws. "We want to encourage the police to ticket cyclists, as well as ticketing drivers. We want both sides treated equally."

At the same time, Preston says assaults on cyclists are rarely pursued aggressively enough. "It's a big problem. We don't have a community where we can say (police) really prosecute that. Even when someone is killed on the road, it's hard to prosecute. Recently, there was a case of someone being convicted of manslaughter (for killing a cyclist), and it was actually kind of newsworthy."

But that's the kind of news nobody wants to hear, says Diana Tolton, chairwoman of the Tucson-Pima County Bicycle Advisory Committee. Instead, her group is pushing for a community of responsible bicycle riders--and more responsive police.

"There are so many issues, such as cars turning in front of cyclists and cutting them off, and then police actually citing the cyclists," Tolton says. "A bike can only stop so quickly."

Police also need a better understanding of bicycle-motorist crime scenes, she says, "about what the damage looks like, and what it indicates when a cyclist is involved in an accident."

Still, Tolton admits that assaults on cyclists may fall low on the priority list of busy cops. "You get somebody with a can thrown at them as opposed to a domestic dispute or whatever, and the can-thrower gets lost in the shuffle."

To change that dynamic, "the Bicycle Advisory Committee is going to create a video and education materials for the Tucson Police Department, Pima County and the whole region," she says.

"We feel like there's not a congruent understanding, among law enforcement officers, of what the law is in relation to bicycles. There are just too many incidents of people not understanding what those laws are. It's a problem nationwide. Anywhere I've ever ridden, it's been a problem."

Despite these hurdles, Tolton is keeping her eyes on the prize. "This region was given gold," she says, "and we want platinum. We're putting together an application for 2008--but our weakest part remains law enforcement."

Tucson is the Best Place for "Everyday" and "Bearded" Biking 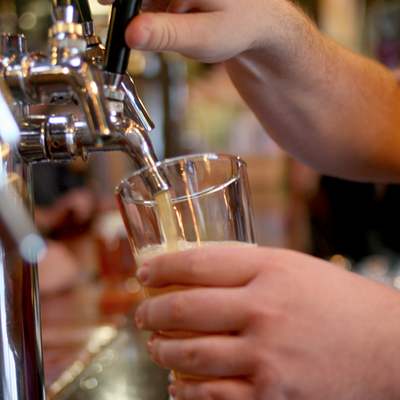