Pastiche
WHEN WE ENTER a restaurant we enter into a pact of sorts, a contract between the restaurant and the diner, the seeker and the source. The loftier the claim a restaurant makes, the more it is expected to deliver. From the cover of its menu, Pastiche lets you know it has a trick or two up its sleeve.

Most restaurants don't have a dictionary definition emblazoned across the cover of the menu. Probably because they don't need one. Those that do are letting you know, in no uncertain terms, what needs to be spelled out. In this case, should you not know what the word "pastiche" means: "1. artistic composition made of bits and pieces or 2. a musical, literary or artistic composition made up of selections from different works." Then you are told in a resounding fashion that your last option is: "3. a creative dining establishment located at 3025 N. Campbell." You get the point. How could you miss it?

Such overwhelming need to point and explain leads us to believe that something daring or imaginative is about to spring forth. Perhaps a rabbit is about to pop out of the hat--or maybe there will be some sleight-of-hand to cover up the fact that something is amiss.

The menu is certainly ambitious. We get to play more word games with categories broken down into parts: To Entice, Green Stuff, Noodle Things, Getting Serious, Between Bread and Afterglow. Of course, all of this is just code for announcing the basics: appetizers, salads, pastas, entrées, sandwiches and desserts. And that's OK, the clever word games, as they signal to us that a game is afoot. We should prepare to be teased and delighted. This, we are supposed to think, is going to be good.

We were "enticed" to start with the mushroom soufflé ($6.50). We were not disappointed by the lovely little soufflé, puffed up like a wee hat and decked with frizzled leeks and a scattering of red bell pepper confetti. For the most part it was fairly straightforward comfort food. The Asiago cream sauce was understated, but there was enough earthy flavor in the soufflé to float it along. This was not a razzle-dazzle dish, but a simple homey little comfort that works.

To Pastiche's credit, the ginger crab cakes ($8.95) were made up mostly of crab, but that was the cakes' only creditable point. Unlike other crab cakes that sizzle up golden with a bit of breadcrumb to give them some texture or body, these were more like an unmolded crab dressing or dip. The loose and watery texture didn't stand up to the rather vinegary-sweet tomato-oil dressing. What could have been a satisfying and well-matched pairing simply fell apart. Literally.

Many of the menu items sound interesting, offering up a mélange (pastiche) of flavors and ingredients. The roasted half duck with currant wine glaze, carrot and ginger whipped potatoes and sautéed vegetables ($18) sounded too good to pass up. One can easily imagine the tart note of the currant sustaining the rich flesh of crispy duck, then crossing over and marrying well with earthy sweet flavors of carrot and ginger.

However, when delivered, the duck was dry and overdone. The whipped potatoes were exceptional, though, airy and light, showcasing the delicate flavors of ginger and carrot. The asparagus was deftly sautéed until just tender. But the currant sauce, a key component, was over salted and muddy, and held no discernible fruit; it failed to tie in the other flavors. Although the dish had tantalizing ambition, it failed to pull together. In the end, we savored the vegetables.

The same could be said for the smoked pork tenderloin ($15.95). Grilled and served with a prickly pear-Thai chile barbecue sauce, plus baked black beans and oriental coleslaw, this was another example of too many ingredients that didn't pull together. The pork tenderloin was grilled to a perfectly pink medium rare and fanned in the chile glaze that was, by turns, cloyingly sweet then searingly hot, offering no mid-range flavors for balance. Naturally, it completely overpowered the flavor of the pork. One turned to the oriental slaw for a cooling bit of respite, but the dressing was off-kilter and too vinegary. The baked black beans, smoky and redolent, were easily the best part of the dish, and quickly consumed.

Both sandwiches we tried, the Calento ($6.50) and the grilled salmon sandwich (8.95), suffered from the same form of excessive ambition. The Calento, melted brie and fresh tomatoes, should be simple to execute. The bread was grilled and the brie melted, but when the cold tomatoes were wedged in, then drizzled with olive oil, and a bristling nest of julienned basil was pressed on top, the odd textures killed any joy to be found. The brie stiffened into glue and the julienned basil chewed up into a powerful mouthful of mown hay.

The salmon sandwich may very well be an exceptional sandwich, but on the day we ordered it, the salmon had started to turn, tasting too oily and fishy, overwhelming the wedge of portobello and scallions. On the menu, the sandwich promised to be served on a wasabi roll with a citrus aioli, but in fact these flavors were not to be found.

A dish is complete when the diner doesn't need to think about individual components, since the plate becomes a whole larger than the sum of its parts. Whether as simple as the alchemy involved in that legendary madeleine steeped in tea or as complex and varied as a Moroccan tajine, it is the correct balance of flavors and textures that transports us beyond the elements of the dish and delivers us into pleasure. This isn't magic; it's chemistry. And it comes from understanding and executing techniques properly in the kitchen.

Sadly, former executive chef Alan Sanchez has departed from Pastiche, and currently the restaurant is recruiting both an executive and sous chef. Perhaps this explains the erratic translation of menu items. Regardless, the menu should be reined in. Although one should never chastise imagination and creativity, such impulses require a trained hand to interpret and transform a swarm of ingredients into a balanced dish. Then one can charm and delight without trickery or device.

Service at Pastiche is consistent and attentive. Water glasses were constantly attended to, coffees and teas replenished. We were greeted promptly and warmly and well taken care of for the entire meal. Indeed, as we perused the dessert menu, our waiter encouraged us to try all the desserts by creating a sampler for the table.

The desserts showed particularly well. None of them suffer from the straining ambitions that plague the larger part of the menu. The white and dark chocolate mousse crêpes are not too sweet; the deep chocolate flavors are given full rein and work well swaddled in tender crêpes. The tiramisu is a chocolatey and cakey rendition that holds its own. The Irish crème brûlée, a deeply yolky rich cream, is infused with just the right amount of liqueur. Our favorite part of the platter was the lovely scattered handful of unadorned fresh raspberries, blueberries and kiwi, a simple pleasure.

If Pastiche is, as it claims, a "modern eatery," then it fulfills its own promise: slick, contemporary, a visage of itself. Of course the temporary lapse in consistency without a chef causes havoc, and we must wait to see who Pastiche recruits to stabilize the staff. Even in a state of transition, one cannot say that Pastiche entirely fails to deliver. The menu is far-reaching, with moments of full realization.

Still, the aesthetic that drives the menu--"the composition made up of bits and pieces"--haunts most of the excessively ambitious offerings. Perhaps less fervor might yield a more sustained and sustaining menu. After all, the word "pastiche" is pressed into service of many different interpretations, including appropriation, spoof, lampoon and parody.

Words--careful how you choose them. 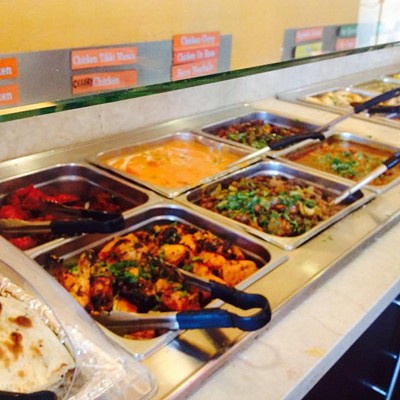