Mickey Rourke and Marisa Tomei shine in 'The Wrestler'

Opens Friday, Jan. 23, at AMC Loews Foothills 15 (742-6174) and Century El Con 20 (800-326-3264, ext. 902).
The Wrestler
Darren Aronofsky
Mickey Rourke
Marisa Tomei
Evan Rachel Wood
Mickey Rourke no longer looks like Mickey Rourke. Instead, he now looks like some ancient, evolutionary precursor to Mickey Rourke. Word is that this is the result of a series of punishing blows to the face, followed by plastic surgery that seems to have been performed by Pablo Picasso.

Marisa Tomei, on the other hand, looks like a natural extension of a prior Marisa Tomei moving into some future state where she would be roughly as old as Marisa Tomei currently is. Which is to say, she's decided to age fairly naturally, and good for her. The other option, apparently, is to wind up looking like Mickey Rourke.

"They" being director Darren Aronofsky and writer Robert D. Siegel. Siegel used to be editor in chief of The Onion, but there's no Onion-style comedy here. Instead, Aronofsky and Siegel have created a strangely warm and intimate film. Sure, Rourke, as washed-up professional wrestler Randy "The Ram" Robinson, does things like inject himself in the ass with steroids (if you've ever wished to see Mickey Rourke's butt, after this movie, you'll think twice before you go around making wishes), cut his head open with a razor, receive a series of staples to his torso and roll around in bloody barbed wire, but he does it all in a family-film sort of way. My family designed the Abu Ghraib interrogation program, though, so your mileage may vary on that.

The film starts about 20 years after The Ram's professional heyday. He has since been reduced to working in small venues on the second-string wrestling circuit, where his minor-celebrity status earns him just enough money for steroids and shiny codpieces.

The backstage sequences at these matches are the heart of the film. Wrestlers are generally divided into the good guys, "faces," and the bad guys, "heels." But behind the scenes, the heels are the nicest people on Earth. Their existence is dedicated to making the faces look good, and even during the matches, Randy's opponents whisper encouragement and check to make sure he's OK. It's like wrestling is a special form of love and hugging, but with more blood and bolder finishing moves.

When Randy isn't tenderizing his body for the worms that will soon be feasting on it, he's playing with neighborhood kids or hanging out at a strip club. There, he waits for his favorite performer, Cassidy (Marisa Tomei), who, like Randy, is about 20 years past her professional prime. These scenes aren't as great as the ones with the wrestlers, and the story is a bit forced, but Tomei is very good.

Both actors are enhanced by the decision to use videotape instead of film. There's something about film that gives the image a dreamlike quality, but video is much more unforgiving. In daylight sequences, every line on Tomei's face pops out, and the weird, mushy, semi-mobile thing that used to be Rourke's body becomes particularly horrifying. Since the film is about the characters' degradation and decline, this works especially well. It also gives an intimacy to the film, with much of it shot with hand-held cameras and in close-up. Cinematographer Maryse Alberti's style won't be rewarded with an Oscar, because it's intentionally ugly, but it's one of the most thoughtful pieces of cinematography you'll see, in that it doesn't just tell a story; it accentuates character.

One of the best scenes involves The Ram working a deli counter at a local supermarket. He takes to it like a professional showman, turning the serving of meats and cheeses into a self-esteem workshop by creating micro-sized moments of intimacy with each customer. Rourke's performance here is perfect: He's so cheery, you feel like he could explode in rage at any moment. But it's also nice that Aronofsky hired real people to be the customers, and shot them in an unflattering but extremely natural-feeling format. The cheapness of the linoleum, the unpleasant hue of the florescent lights and even the shininess of oily potato salad in a plastic container give the scene a necessary underlying sense of reality, so that, if Randy does break character and yell at his customers or toss some pastrami on the floor, it will feel like real damage, and not special imaginary pretend movie-damage.

The only part of the film that doesn't work is a tacked-on subplot about Randy trying to reconnect with his college-age daughter, Stephanie. It's a trite story, and Evan Rachel Wood, as the daughter, is forced to emote and growl in the kind of angry and unmotivated performance that you'd expect in a Lifetime made-for-TV movie. I'd recommend bringing a cardiac cooling unit just in case your heart becomes dangerously warm during their emotional reunion.

But the error of putting that story in is more than offset by the amazing wrestling sequences. The film all leads toward a rematch between Randy and an opponent from 1987, a used-car dealer named Bob who had been a wrestling heel called "The Ayatollah." (For you youngsters out there, that'd be like calling a contemporary wrestler "Osama bin Laden" or "Dick Cheney.") The chemistry between Bob and Randy seems very real, and their affection is genuine, offering a sharp contrast to the robotic emoti-con sequences between Rourke and Wood.

On the strength of the filming technique, the performances and the thoughtfulness of the wrestling sequences, The Wrestler earned a place on the best-of lists of many pretentious and snobbish film critics. In spite of that, it's actually entertaining and engrossing, plus, unless you work in elder care, it'll probably be your last chance to see Mickey Rourke and Marisa Tomei naked, so don't miss it.

The Wrestler is not showing in any theaters in the area.

High School Sports on Hiatus Until at Least March 28 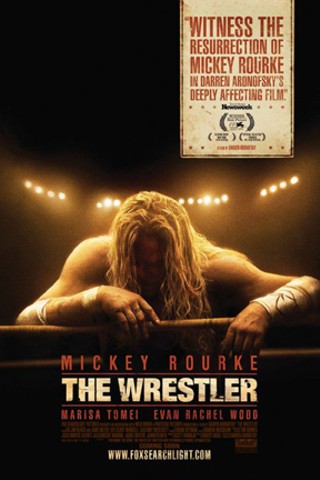