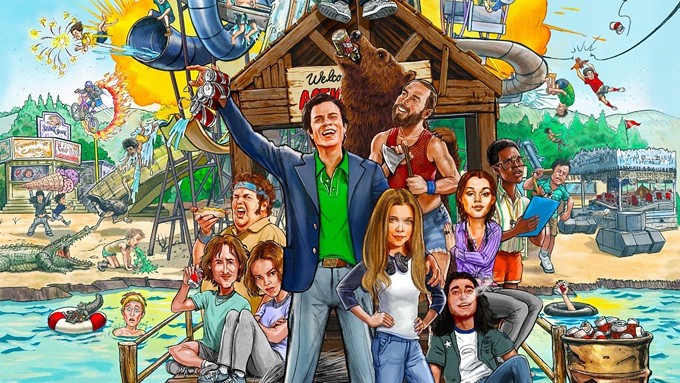 So, something has happened in Jackass land since Bad Grandpa.

While Bad Grandpa wasn't technically a Jackass movie, it was a "Jackass Presents" movie, and it had the usual Jackass movie director, Jeff Tremaine, calling the shots. The results were the kind of fun we expect from a Jackass movie, with a little more of a narrative plot, but the emphasis remaining on the killer stunts.

Action Point is a stinky-pile-of-shit movie. The Jackass label and director are gone, with only stars Johnny Knoxville and Chris Pontius representing the former crew. The slant goes much more towards the narrative—a bad and boring narrative—with only a few OK stunts thrown in for good measure. It's an uneven, embarrassing, unfunny mess.

That's a shame, because Knoxville proves he's certainly still game to get his ass kicked for the glory of cinema (although he's looking a little beat up these days), and the "true" story at the center of the movie is one ripe for Jackass-type fun. The formula simply doesn't work this time.

The story is based upon a real, now mostly defunct amusement park (Action Park in New Jersey) that had an actual death count (six deaths). I grew up on Long Island and would go to this park in the '80s. It's now legendary for its danger factor. (You can see the stories on the Internet.) It was a time and place where safety just wasn't really on the top of everybody's list of concerns.

I nearly drowned in the tidal wave pool (others actually did), I marveled at the cannonball loop slide I could never go on because it was closed due to broken bones, limbs and noses (that ride is lamely immortalized in this movie). There was also an Alpine Slide with a cement track which you rode on atop a plastic car with a shaky, janky brake; you were in complete control of whether or not you met your bloody demise. It was fucking crazy.

Sadly, the movie inspired by it is not. It's dumb, and it plays it safe, basically an insult to the legend of Action Park, or Death Park as we liked to call it.

Knoxville plays D.C., an older man babysitting his granddaughter in the present day, so that calls for the old-age makeup Knoxville usually wears so well. D.C. reminisces about a crazy park he once owned called Action Point, and the story flashes back to the '80s and D.C.'s efforts to create a thrill ride/water park haven where "you are in control."

D.C. tries to save the park from evil land developers while trying to entertain his daughter Boogie (Eleanor Worthington-Cox) who is visiting for the summer. There's some sentimental nonsense involving the father-daughter relationship, which acts as nothing but a roadblock to what we want to really see: the stunts.

Those stunts are only mildly amusing, and few and far between. They include Knoxville getting catapulted through a barn (pretty good), Knoxville getting blasted by a water hose (OK) and Knoxville hanging around a beer-swilling bear (funny the first time, been there done that by the 10th). At one point, they tempt a squirrel into Pontius's shorts to fetch acorns and tickle his balls. It does appear to me that some animals—including the squirrel, an ostrich, an alligator and a porcupine—were mildly abused during the making of this film. Any animal that has to hang out near Pontius's ball sack should be considered in harm's way.

Let's face it, Knoxville has to slow down on the daredevil stuff lest he wants to meet an early grave. Bad Grandpa, and now Action Point, are evidence of this. What Knoxville needs is a new Jackass crew that he can mentor over from the sidelines.

Action Point is proof he is past the point where he can take a herd of buffalo to his mid-section. It's also proof he needs Tremaine and his cronies to help guide the mayhem. This new crew is lamer than the Cannonball Loop being closed every summer I tried to ride it.