Amalour Revival Lounge offers up classic fare and cocktails, but needs to step it up 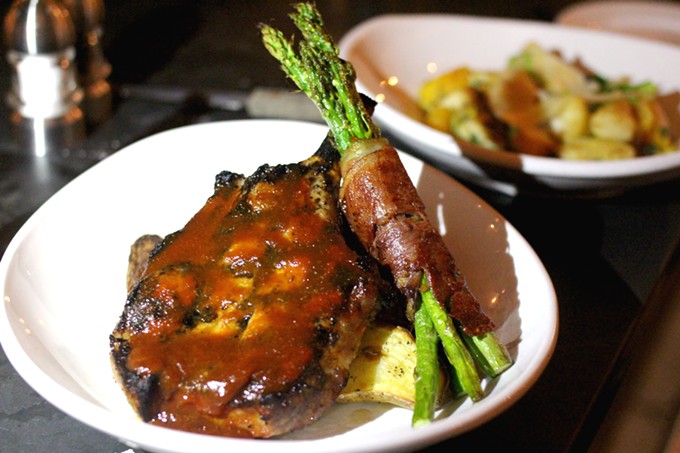 Heather Hoch
Amalour serves up hearty fare that could use some finesse.

Hole-in-the-wall joints can be endearing haunts for regular dining out excursions and upscale restaurants seek to wow with exceptional service and inventive fare with luxe ingredients. Amalour Revival Lounge, one of the newer additions to St. Philip's Plaza's line-up of eateries, finds its way somewhere in between those two types of restaurants—it's definitely not a dive, but the prices aren't so steep that you have to go only on special occasions.

Amalour took over the now-defunct Bodega Kitchen & Wine space a little over six months ago in a somewhat turnkey fashion, opening up about a week after the previous restaurant closed. Many of the design elements—including the large plush grey booths—remain the same, with some added new flourishes. There's nothing wrong with that at all because Bodega was a beautiful spot before closing and there's no need to overhaul something that's already functional.

Understandably, much of the buzz around the spot revolves around its décor, which was even the subject of a KGUN segment. It's that quaint sort of French provincial brasserie chic that you instantly want to photograph—and many do. However, the layout itself is kind of disjointed, with a large patio partitioned in segments, the main room centered around the bar and another dining area separated off to the side. Good for private parties, but it would feel pretty lonely if you were the only diner in there. 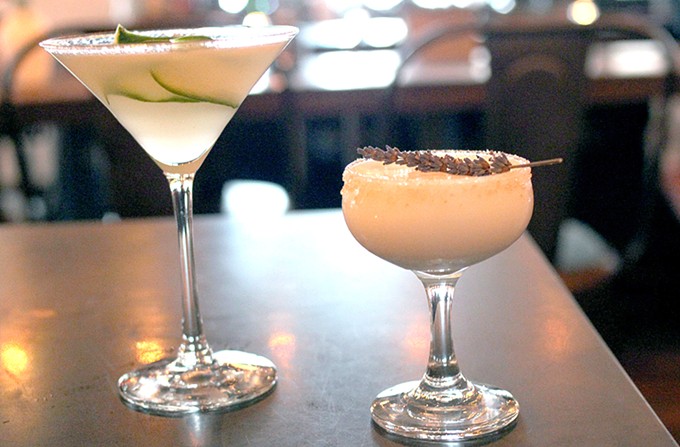 With the bar as a focal point, classic cocktails like the Negroni, Old Fashioned, Mint Julep, Sazerac and several more are featured, alongside some house creations. Of the more unique drinks, the bar's take on a Bee's Knees successfully uses a lavender sugar rim and culinary lavender garnish to tie together an aromatic floral theme. The bar also serves wine and a few local and international beers. Best of all, a pretty sizable selection of all of those is available for $4-$6 during happy hour.

Heather Hoch
Phyllo and potato fritters are available to start or during happy hour.

Similarly, many of the small starting bites are $5 during happy hour as well. Flaky phyllo wrapped pulled pork or feta and potato fritters studded with cauliflower and jalapeno or parsnip and parsley fit the bill here, while the full-priced starters offer up bountiful charcuterie boards ($15-$18) and bruschetta ($8-$12). The Black & Brie bruschetta wins over with a sweet and savory pairing of lightly dressed arugula atop fig jam, brie, walnuts and apples. Certainly, it isn't the most inspired flavor combination, but, if it works, it works.

To that point, though, it does seem like Amalour's menu relies on familiar crutches and it's hard to tell if it's part of the "revival" or simply playing it safe. Interestingly, the salads on the menu seem to be the most immune to this, serving up alluring blends of fresh, local ingredients, dressed with citrus oil, creamy Dijon vinaigrette and more. But, back to that bruschetta, of course fig jam, brie and arugula will go well together, but, that classic mix was overcomplicated by adding apples and walnuts. Sometimes less really is more. 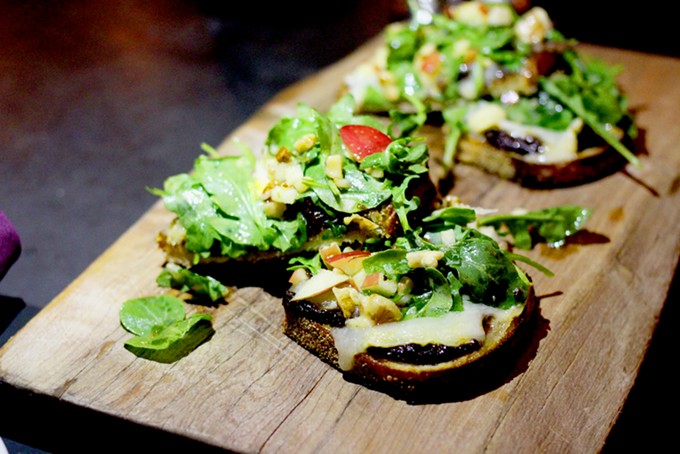 Heather Hoch
Bruschetta boards come on a base of Bakehouse bread.

Similarly, the Butternut & Gnocchi entrée ($16) delivers delicious homemade goat cheese gnocchi, perfectly seared with brown butter ghee. However, the addition of butternut squash is relatively superfluous, especially considering it was a bit undercooked and underseasoned. The plate would do better with less added components and more of the main event, or some retooling on veggie prep at the very least.

Other entrees include affordable chicken, steak or shrimp skewers ($8-$12), a flat iron steak ($22) and the restaurant's take on coq au vin ($18). Admittedly, Beeler's "French style" pork chop ($23) had me a bit confused. Slathered in barbecue sauce and paired with thick-cut prosciutto wrapped around asparagus and roasted potatoes, the dish didn't seem to be one cohesive presentation. My main issue, though, was the sauce, which tasted like it came from a bottle of barbecue sauce and was not particularly French nor was it particularly appealing—especially in such heavy doses.

While the food is just O.K., it's important to note that the service at this little family run restaurant is so warm, genuine and knowledgeable about the product that you can't help but want the spot to succeed. In a time of highly manufactured restaurant concepts, it's a refreshing, authentic atmosphere overall that, with a few modifications to the menu, could push through and become a truly phenomenal and unique place to enjoy happy hour, a nice dinner or even brunch (yes, they also have brunch).