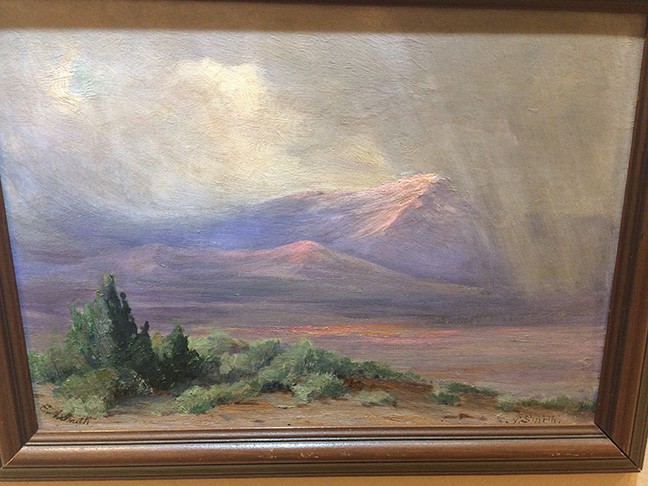 EXTRA: At 2 p.m. on Saturday, March 9, Steven Carlson, curator of the E.A. Smith Archive, and Jan Cleere, author and Western Women columnist for the Arizona Daily Star, discuss The Art and Life of E.A. Smith. Cleere will also give a slide show. Free with admission.

Cézanne may have had his Mont Sainte-Victoire, and Monet his haystacks, but Effie Anderson Smith had Cochise Stronghold.

Like her two French predecessors, who painted their favorite nature subjects again and again (Monet racked up at least 25 haystack paintings), pioneer Arizona painter Smith made at least 14 paintings of the dramatic landscape that Chief Cochise had fought so hard to keep.

An early Impressionist who painted for some 55 years in Cochise County, Smith often focused on the Strongholds' iconic Rockfellow Dome, picturing it in every light and season.

She painted outdoors—en plein air—using quick brush strokes and distinctive colors to capture a fleeting "impression" of her subject. "Early Morning Lights on Old Cochise Stronghold," a 1948 oil on board, catches the delicate light just after dawn. Soft yellow sunrays hit the mountains on the east; in the foreground, white desert flowers glow.

A retrospective exhibition at the Tucson Desert Art Museum, timed to honor the 150th anniversary of her birth, resurrects the work of the mostly forgotten woman once called the dean of Arizona women artists. Thanks to great-grand-nephew Steven Carlson, a curator who's been tracking down her work, the show displays 46 of her oils.

Smith held to pure Impressionism her whole career, as did Monet, even as painters like Cezanne moved toward the more structured, geometric work of Post-Impressionism, and others championed cubism and abstract expressionism.

Most of the paintings here are scenes of Cochise County; in the early years, she tooled around by herself in an early-model open-air auto. (A wonderful photo of her at the wheel is included in the show.) She went a long way around the mountains to paint "Cave Creek Canyon in the Chiricahuas" and elsewhere hauled up herself up to the peaks to get a long view in "Lonesome Highway."

She was crazy about yuccas in bloom, and the white flowers often loom large in the foregrounds of valley paintings that seem to stretch into eternity. 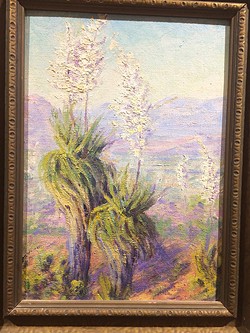 The deft Grand Canyon works that ultimately won her acclaim in the big cities of the East Coast get places of honor. And the Morenci landscapes she made in later years, after her geologist son moved there to work the mine, also make an appearance.

Only one painting hints at the devastation wreaked on Arizona by mining. A painting of the Douglas Smelters from 1931, commissioned by the president of Phelps Dodge, seems pretty at first, but gradually you register the billowing smoke and the sickly yellow skies.

Smith remained faithful to her regular color palette of soft violets, pinks and yellows throughout her career, to the extent that you start wishing for bolder colors, a deep monsoon blue, say, or a screaming orange sunset. Smith did get looser with her brush later in life, and one critic compared the thick, quick bursts of paint in a vigorous yucca work to none other than Van Gogh.

A bonus history section, chock full of fading news articles and photos, tell us the story of Smith's long life, an 85-year-span that lasted from 1869 to 1955.

Her history is littered with the routine tragedies of those days: she buried two husbands and lost two of her three children in infancy, and she weathered tornadoes and fire. But nevertheless she persisted, determined to make art.

Born Effie Anderson on a farm in Arkansas, she was already painting—and painting well—in her teens. The show includes an imaginative work she painted at 15, of a towering Arkansas bluff.

She trained as a schoolteacher, married at 20, and at 21 lost her husband to tuberculosis. An older brother had moved west to Territorial New Mexico, and after a series of disasters in Arkansas—a devastating tornado, the death of her father—she and a sister followed. Both young women got jobs as schoolteachers in Deming.

Later in her 20s, Smith married again, to Andrew (A.Y.) Smith, a Scottish immigrant with mining ambitions. The two wed in Bisbee and moved in 1896 to Pearce, where the booming Commonwealth Mine was cranking out gold and silver.

Andrew became the mine manager and president, and while his position gave his family a fine house, it didn't protect them from the pollution emitted by the mine operations. One writer blames the deaths of two of the family's infants on the unhealthful conditions. (The middle child, Lewis, born in 1898, grew up healthy and strong, but firstborn Andrew died in 1896; the third child, Janet, died in 1907.)

Before the last of these heart-rending deaths, Smith had already begun traveling to California to study with the state's homegrown impressionists, piggy-backing on Andrew's business trips. After the loss of her little girl, her visits intensified.

She worked under artists in Oakland, San Francisco, Pasadena and Laguna Beach, refining an appealing landscape style that was beginning to win her acclaim. She became a sought-out speaker on art in Tucson and elsewhere, taught art classes, and regularly sold her works, including at the El Tovar Hotel in the Grand Canyon.

In another setback, she lost a treasure trove of paintings in a house fire in 1929, at a time she was lined up to bring her work to East Coast galleries. But she rapidly painted new pieces in time for the 1931 exhibitions. Not long after, her husband died of kidney disease. This final loss of a family member propelled her into even more intense work; remarkably, over the next 15 years, when she aged from her 60s into her 70s, she produced more paintings than she ever had before.

When the Pearce mine closed down in 1942, she permanently left her home, splitting her time between Douglas and her son's house in Morenci.

Smith rarely veered away from sunshine in her works, but one unusual rainy-day painting pictures Pearce in a storm. The work, "Rain Over Pearce," is undated, but it's tempting to think of it as a valedictory.