Out of the Way

Is the Pima County ban of people on medians about public safety or more criminalization of poverty and homelessness? 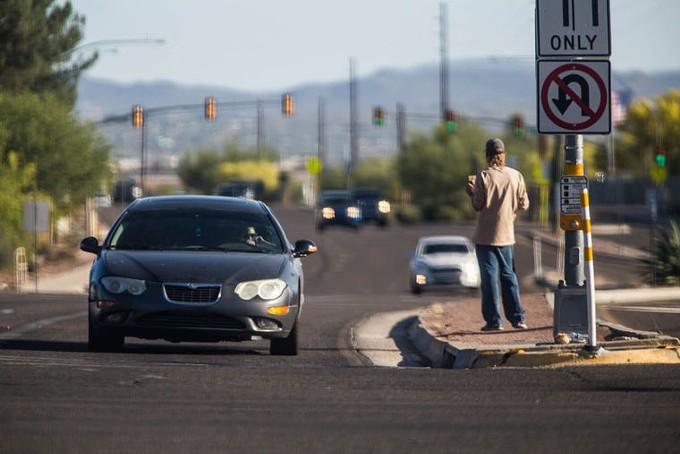 Pedestrians are now banned from standing for too long on 32 medians, mostly in northwest Tucson and other unincorporated areas of Pima County, after the Board of Supervisors approved an ordinance last week that labels lingering "for purposes other than waiting for the signal to change to cross safely" trespassing.

Shortly after the vote, county Department of Transportation workers began to install "Pima County property. No trespassing" signs at the first 14 "priority" intersections in the Foothills District. This week, they're tackling 18 intersections in the Rincon and San Xavier districts, a county press release says.

The ordinance was sold as a public safety measure. But critics say this is another attempt to criminalize poverty and homelessness, because those mostly affected by the possibility of a trespassing fine are men and women panhandling on medians.

During a meeting in northwest Tucson on April 25, residents demanded Pima County Sheriff Chris Nanos to rid the area of panhandlers and homeless camps. People said they were fed up with trash, human waste and alleged crimes.

At the meeting, Pima County Supervisor Ally Miller, who had unsuccessfully tried twice before to pass a similar ordinance, asked Nanos to stand up and support her proposal to ban panhandling on medians.

"I told her I cannot do that, sheriffs shouldn't be involved in politics," Nanos said. "Don't put the sheriff in a political situation like that."

But Nanos testified in support of the ordinance at the supervisors' meeting last Tuesday. He told the Weekly that he backs the ordinance because "people don't need to be on medians. It is not a safe environment. People are driving 40, 45 miles an hour."

The county press release says that over the past 15 years, there have been an average of 357 crashes at intersections with an average of three deaths every year. Nine of those injuries involved pedestrians "in or around the median and at least one results in a fatality every two years."

A couple of weeks before the board voted on the issue, Pima County Sheriff deputies began to patrol the intersections that would be affected to inform anyone standing on the medians that they had to move or face in the future a citation for trespassing. Nanos says that he doesn't want to send anyone to jail over this.

Tucson homeless advocate Roy Trout says this is a classic move to continue the criminalization of poverty and homelessness. "Many people who can't work depend on that money, because they have no other source," Trout told the Weekly last month. "I have been out there for 22 years, I have a good idea of what it's like to be on the streets."

For years, Trout sold newspapers on medians—until the City of Tucson banned it back in 2001 amid reports of injuries, including deaths.

"We have society telling us, 'go get a job.' Well, I had a job," Trout said. "I was selling newspapers. That was my job and you all took that job from me. I don't qualify for much else. I have been on the streets since I was 15."

Nanos agrees that this ordinance doesn't address homelessness and its root causes. His job is to ensure all county residents are safe, but he says we ought to invest in housing people, job training programs, as well as mental health and substance abuse services.

"Have some humanity, and let's find them a home," Nanos says.

Supervisor Richard Elías was the sole "no" vote.

"That ordinance is not going to change one thing of the homeless problem they have," he says.

After voting in favor of the ordinance, Supervisor Ramón Valadez asked for a staff report in three months to show how the county has in any way helped homeless men and women who sold newspapers in the medians affected by the changes.

As several homeless advocates have said in the past, these programs aren't effective for everyone.

Elías supports an approach that involves housing people first, not issuing fines to individuals who won't be able to pay for them. Unpaid fines can lead to arrest warrants.

"Even [Sheriff Nanos] said 'I don't want to take people to jail.' It costs a lot of money to book them in the county jail," Elias says. "It is just wasting money."

The ordinance will push people out of the medians and onto other parts of town. Elías refers to Veinte de Agosto Park in downtown, which has now been closed for nearly one year over public safety and health concerns. The houseless men and women who occupied it headed to other parks further away.

"This is not a safety issue," Elías says. "They just don't want to have people there, they don't want to interact with the homeless. As long as they are out of sight, they are out of mind. They are obviously very angry and have great fear, but we need to attack the problem, not scapegoat people."