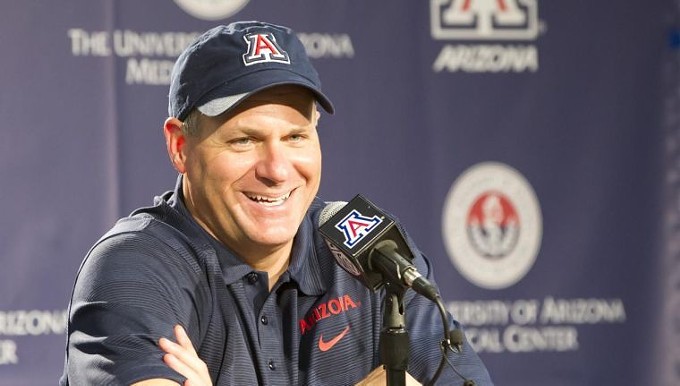 Courtesy
Rich Rod gives the University of Arizona their very own “me too” scandal.

It's been a week since longtime University of Arizona football coach Rich Rodriguez got the guillotine amid allegations of sexual misconduct.

Rodriguez, who went 43-35 in his six seasons coaching the Wildcats, was named as a subject of a notice of claim filed by his former personal assistant, Melissa Wilhelmsen.

The $7.5 million claim, filed on Dec. 28 with the Arizona Attorney General's Office, alleges that Rodriguez did little to promote a welcoming atmosphere for women like Wilhelmsen, with an authoritarian dedication to secrecy, which morphed into outright sexual harassment with time.

There are many juicy tidbits in Wilhelmsen's claim, but here are the items that stand out in a crowded field of dumbassery and mismanagement:

The existence of 'The Hideaway Book'

One of the stranger things included in Wilhelmsen's claim is that Rodriguez typed up a book every year for his assistant coaches and football operations people, dubbed "The Hideaway Book," which sought to establish absolute secrecy within his inner circle of confidantes. The book yielded a myriad of horrible-sounding catchphrases, such as "Title IX doesn't exist in our office," referring to the landmark 1972 legislation that outlawed gender-based discrimination in education. Wilhelmsen, along with two former Arizona assistant football coaches, were tasked with upholding this code of discretion and jokingly referred to themselves as the "Triangle of Secrecy."

One of the biggest storylines from Arizona's dismal 3-9 season in 2016 was the death of offensive lineman Zach Hemmila, who passed away at 22 from a toxic cocktail of painkillers (oxymorphone and alprazolam, to be exact) in August of that year. It was clear, according to the claim, that Rodriguez had forewarning of Hemmila's drug dependency, with a former assistant coach reportedly taking Hemilla to Rodriguez and telling him that the 22-year-old needed help. Rodriguez, according to the claim, responded by saying, "He'll be fine." Wilhelmsen said in the claim that she was forced to keep the coach's knowledge of Hemmila's issues secret, a common theme in the claim.

Rich's wife gets in on the absurdity

Anyone who's spent time around the University of Arizona football program has seen Rich's wife, Rita, standing on the sidelines. Rita, according to the claim, asked Wilhelmsen to lunch in 2016, only to turn their cordial meeting into a three-hour interrogation. She allegedly tried to pin Wilhelmsen down on what she knew about her husband's flirting and promiscuity, which Wilhelmsen cited as another cause of emotional distress.

The claim includes an explosive story about how Wilhelmsen was asked by Rich to get a sideline pass for his "friend" at the USC game in Tucson. She, according to the claim, had to separate Rita from this "friend," once she realized that it turned out to be his girlfriend. The one issue with Wilhelmsen's recollection is that the 2015 game was not in Tucson, but rather at the Los Angeles Coliseum. It wasn't much of a game either, with Arizona falling to the Trojans, 38-30, to fall to 5-5 on the season.

Things veered into outright sexual harassment in January of 2017, when, according to the claim, Rodriguez asked Wilhelmsen to come into his office and shut the door before telling her: "Whatever you need, I'm here for you." Rodriguez then, according to the claim, grabbed Wilhelmsen, embraced her, touched the side of her breast and tried to kiss her. Rodriguez, ever the gentlemen, cried out that he had nowhere to stay that night, with Wilhelmsen assuring Rodriguez that she'd find him a hotel.

Rich and the magically awkward underwear

Before the outright harassment, Rodriguez's preferred mode of operation was to make veiled statements about underwear, the claim said. One example Wilhelmsen describes is when he asked her to get underwear from the equipment area, which Wilhelmsen found to be degrading. Rodriguez then made comments about how his preferred style of underwear "visually enhanced" his junk when worn.

Wilhelmsen and Rodriguez would split in August, but rest assured that Rich made sure to get plenty of awkwardness in before that. In May, according to the claim, Rodriguez pulled her aside during lunch celebrating his birthday to do a tequila shot with him in his office while his family sat in another room, which she declined. He also asked Wilhelmsen for a ride to the airport and walked past her without a shirt, asking her to stay in his office to watch his dog as he showered.

On Wilhelmsen's last day with the University, on Aug. 11, 2017, Rita allegedly cornered her in the office, demanding to know about her husband's girlfriend. Wilhelmsen, according to the claim, confessed to knowing about Rich's infidelity and apologized for not admitting sooner. Rita demanded to have a meeting with Wilhelmsen and Rich, but Wilhelmsen did not agree, not wanting to take part in that disaster. Rita, according to the claim, blew up Wilhelmsen's phone with so many text and voice messages that Rich called her to apologize on his wife's behalf.