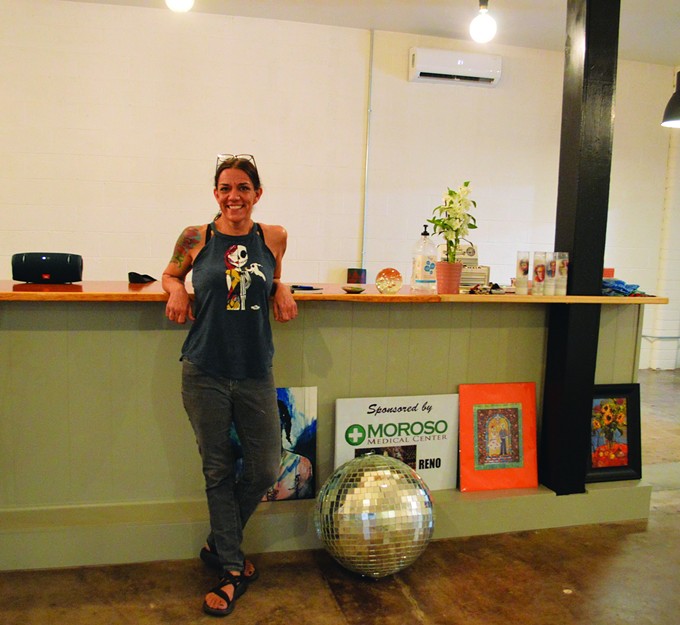 Courtesy Photo
"My gratitude runs deep," Dr. Heather Moroso said. "I always say it's a cockle-warmer, because even the event was with people who I've known since I started this, from musicians to people cooking food. It was definitely a team effort, even though my name is up front."

Heather Moroso, one of Tucson’s top cannabis doctors, started work on a new community wellness center just as most of the world was shutting down thanks to the COVID outbreak in early 2020.

More than two years later, she celebrated with the grand opening of the Moroso Medical Center on April 1.

Moroso, who has won multiple awards from Weekly’s annual Cannabis Bowl, has survived both the pandemic and a crash in the medical marijuana certification business. Now she’s ready to fully dedicate herself to her new endeavor.

The Moroso Medical Center is located in South Tucson at the intersection of East 33rd Street and Fourth Avenue, the former site of Antonio’s, a historic tavern that was reportedly the last bar in a one-mile-square city that at one time had as many as 50 drinking establishments.

Now the building is a naturopathic wellness center and cannabis-friendly space for new patients and those who made the move with Moroso from the Speedway location, where she practiced for five years.

“What we’re excited to do is create a cannabis-friendly space,” Moroso says. “It’s not like a hookah lounge where people smoke weed all day, but if they attend a class, people can choose to medicate if they want.”

The building has a large, open and airy main space filled with art Moroso has collected over the years. She’s incorporated features of the old tavern, such as the bar top that supported generations of elbows and many glasses of beer.

She is still settling in, but Moroso is planning to expand her offerings to include a variety of classes from creating DIY home-made edibles to grow-your-own workshops to soil classes.

Moroso will also offer a variety of yoga classes, both inside and behind the building, which has become a friendly place for her patients to gather for classes and other events.

In addition to her clinical work, she will also offer alternative types of care, from acupuncture to naturopathic consultation, massage and nutritional advice.

She plans to bring back her “custom Apothecary shop,” that will use as much from the on-site garden as possible for products like the Chiltepin CBD icy-hot, as well as other lotions and potions processed with an in-house herbal still.

On top of all that, visitors will be able to enjoy smoothies created in the building’s large kitchen.

The entire project has been a community effort through an extensive support group that planned and executed the project, including the “ethnobotanical” garden that will provide fresh food and medicinal plants for various projects, classes and Moroso’s own line of products.

Moroso has relied on the help of friends to build and decorate interior and exterior spaces, often using the barter system to provide work and materials.

“All the work was done by volunteers and trade with friends,” she says. “Just setting up the space was done by just pooling resources. I did pay people but it was also a lot of friends, blood, sweat and tears and my own biceps.”

Even the grand opening was a communal event, with her friends Miss Olivia & the Interlopers and hip hop band Jivin’ Scientists providing an evening of live music. Local artist Jessica Gonzales, whose works graces nearly every wall in the building, worked on murals during the event.

“My gratitude runs deep,” Moroso says. “I always say it’s a cockle warmer, because even the event was with people who I’ve known since I started this, from musicians to people cooking food. It was definitely a team effort, even though my name is up front.”

The project came at a strange time for the world and the Arizona medical marijuana program.

As if the pandemic’s shutdown wasn’t enough, Moroso set out on her venture in the wake of the Arizona Department of Health Services’ move to two-year MMJ certifications, which essentially halved the business of certificate providers throughout the state.

“I would say we’re not quite to where we were before, but we’re a whole lot closer,” she says. “I think it’s really wonderful that people see the benefit of keeping their medical card versus just going with recreational.”

Not only does a medical certificate allow cardholders to possess more cannabis (2.5 ounces of flower versus one ounce), but they can also purchase and possess higher-dosage edibles.

Medical patients also generally pay less for their weed through a reduced tax rate that doesn’t include the 16% sales tax that adult-use recreational customers pay.

Moroso has been in Tucson since 1992, moving here from Seattle to attend the University of Arizona, where she earned a degree in ecology and environmental biology. She then went on to achieve her NMD from the Southwest College of Naturopathic Medicine in 2002.

She has served the community for many years, treating and serving HIV/AIDS patients through volunteer work with the Southern Arizona AIDS Foundation. She worked for El Rio/Special Immunology Associates from 2004-2009.

She has served on the boards of Tucson Interfaith HIV/AIDS Network, Wingspan’s Health & Wellness Advisory Board and the Pima County Ryan White HIV/AIDS Consortium Membership Committee. She currently serves on the board of the Southern Arizona Artists and Musicians Healthcare Alliance.

In 2007, she founded the nonprofit Positively Beautiful, an organization that helps HIV/AIDS patients with their self-esteem as their bodies succumb to the ravages of the disease.

Ultimately, the new space is a reflection of Moroso, from her down-to-earth outlook on life to the community she has built throughout her 30 years in Tucson. That’s also what keeps her working more or less solo, despite offers of partnership from outside her clinic.

“I don’t think people necessarily share the same vision,” she says. “Sometimes, maybe I don’t even know exactly what my vision is. My place is kind of weird and funky and it’s me, which I think works.”