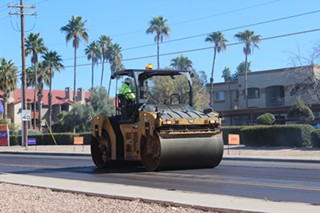 The new year brings a number of new (and old) transportation projects to the region, including the continued widening of Broadway Boulevard between Country Club Road and downtown, long-planned improvements to Sabino Canyon Road and much-needed repairs to Oracle Road.

City of Tucson officials anticipate wrapping up the widening of Broadway Boulevard between Country Club Road and Euclid Avenue to three lanes in each direction in September 2021. The project, which will also include better bike lanes and sidewalks, is a partnership between Tucson, Pima County and Regional Transportation Authority.

The city will also continue work on the Downtown Links project. The new roadway is essentially the long-planned "last mile of Aviation Highway," although it has been scaled back considerably from what was planned decades ago. Running alongside the Union Pacific Railroad tracks for most part, the roadway will stretch from the current end of Aviation at Broadway Boulevard to Sixth Street, with new underpasses beneath the train tracks. It's designed to offer drivers an alternative route from downtown to I-10 in hopes of calming traffic on Congress Street. The project is expected to be completed in 2023.

Two other major midtown projects are on the books for 2021. The city plans to start construction on widening 22nd Street between Tucson and Kino boulevards in late 2021. And while work on the next phase of the Grant Road widening, between Palo Verde Boulevard won't begin until spring 2022, utility relocations are scheduled to begin this spring.

On the eastside, the city will continue with work on widening Valencia Road to Mary Ann Cleveland Way. The project, which started in September 2020, is expected to be completed early this year.

Among the other projects on the drawing board via Prop 101, passed by Tucson voters in 2017:

• Work on Main Avenue/Granada Avenue and Los Reales Road between 12th Avenue and Nogales Highway is planned to start this spring.

In addition, work is planned for a number of residential streets. You can find out if your street made the list by visiting TucsonDelivers.gov, where you can also learn about bicycle and pedestrian improvements.

Up near Sabino Canyon, the county is continuing work on two miles of Kolb Road between Sunrise Drive and Sabino Canyon Road. That narrow stretch of Kolb is being widened from a two-lane road to a three-lane road with multi-use paved shoulders for cycling and walking. The nearly $20 million improvement project will also include updated drainage and landscaping. In addition, a roundabout will be installed at the intersection of Kolb and Territory Drive just south of Sunrise near the Bashas. You'll probably want to find an alternative route throughout 2021 as construction isn't expected to wrap until spring 2022. This is one of the final projects from the county's 1997 road bond.

Another busy Foothills intersection is getting reworked this year:

The hazardous merger of Skyline and Sunrise roads east of Campbell Avenue. The project aims to make the intersection safer for vehicles, cyclists and pedestrians by improving the sight lines between westbound cars merging from Skyline Road to Sunrise Road and cyclists west on Sunrise Drive, who pass directly into the path of westbound Skyline traffic. This half-million dollar project is expected to be completed in spring 2021. The speed limit will be reduced to 25 MPH through the construction zone.

On the west side, The county expects to wrap construction on Bopp Road and Sarasota Boulevard in Tucson Estates south of Old Tucson this spring after nearly a year of construction. The nearly $5 million project reconstructs Bopp to align with Sarasota to create a four-legged intersection with Kinney Road. According to Pima County, the new intersection includes one through lane and one left-turn lane for all directions. In addition, the intersection will receive a new traffic signal, street lights and curb ramps. The existing Bopp Road alignment will also include a cul-de-sac at the west end to maintain access for local traffic.

In addition, several road projects are currently under design throughout the county and will begin soon. South of Tucson, the intersection of Sahuarita Road and Wilmot Road will be reworked to provide a four-way intersection with traffic signals and turn lanes. The project is estimated to cost $3 million and is expected to complete in Fall 2021.

Out in the developing environs of the UA Tech Park, the county is widening three miles of Houghton Road just south of I-10 and adjacent to the Pima County Fairgrounds, all the way down to Andrada Polytechnic and Pantano High Schools. According to the county, the project will reconstruct the current two-lane roadway to a divided four-lane section with two travel lanes in each direction, a separated multi-use path that will connect to the Loop, and drainage improvements. Construction is expected to begin in the second half of 2021 and run through December 2022.

The Arizona Department of Transportation will be repairing Oracle Road, which, as State Route 77, is a responsibility of the state.

Within the first quarter of 2021, 10 miles of Oracle Road will be repaved.

The Miracle Mile Segment from I-10 to Oracle Road and further north from Oracle Road to River Road will be paved over, according to ADOT's southern Arizona public information officer Garin Groff.

Overall, the construction is expected to take about two years. More details, including the repaving's start date, will be available in early 2021.

One of the busiest segments of Tucson's interstate at I-10 and Ruthrauff Road is also getting a makeover this year. Ruthrauff Road will now go over I-10 in a bridge-like structure above the interstate.

The 60-year-old interchange has been closed most of 2020 and won't be complete until late 2021, but ADOT plans to reopen Ruthrauff/El Camino del Cerro across I-10 by this summer as it finishes building exit and entrance ramps.

Groff says the interchange is expected to open before the holidays in 2021, and drivers will have to continue using alternate routes to access the freeway until its completion.

ADOT chose the construction project to increase capacity at the busy interchange, as drivers experienced narrow lanes and frequent stops as trains passed by the east side of the interstate. The new configuration will feature more lanes and the elevated Ruthrauff Road will flow above the railroad tracks where nearly 40 trains pass through a day, according to Groff.

Additionally, construction along Houghton Road that began this summer will continue this year as a six-lane overpass over I-10 with upgraded entrance and exit ramps.

Although two ramps were closed on the east side of the interchange for four months, the ramps have been reconstructed and access to Houghton Road will be available throughout its construction. Groff says the transportation department only expects periodic overnight restrictions and closures.

Groff said the construction in the "rapidly growing part of Tucson" will be the first diverging diamond interchange in southern Arizona, and is expected to wrap up by late 2021.

One of the biggest projects on the horizon in Marana is the Lon Adams Road reconstruction, which consists of replacing the existing pavement, adding sidewalks, lighting landscaping and improving drainage along the half-mile between Grier Road to Barnett Road. The final design phase of the project is winding down but staff had to address concerns of business owners regarding the area's sewer system, according to town engineer Keith Brann.

"We started working kind of late in the game. We worked in some redesign for that [the sewers] and we're also working through utility relocations," Brann said. "Once we have those two issues out of the way, we will put the project on the street."

Brann said he expects the project to go out for bid by spring 2021, with construction to follow soon after.

The town is also close to completing the Chuck Huckelberry Loop around the CalPortland cement plant. Final design of the project is winding down and will finish construction on the last section of The Loop in Marana, said Brann.

"There were some design issues related to their [CalPortland's] heavy vehicles and a bridge we have to put out there," Brann said. "They're looking for a much higher load than what we would normally see because of their vehicles. We expect to put this project out to bid once those issues are situated."

Once the section is complete, residents will be able to ride a bike, run or walk from Gladden Farms to downtown Tucson, said Brann.

Marana is also at the halfway point of construction with the Adonis Road extension between Grier Road and Tangerine Road. The project's goal is to construct a two-lane roadway, providing secondary access to the San Lucas and Adonis communities. This new secondary access will also provide another route to Interstate-10 for those neighborhoods. The current roadway is regularly interrupted by the railroad crossing located at Cochie Canyon Trail and I-10.

"We've got most of the underground loop done on that project and it's currently being graded for construction, Brann said. "We'll probably start grading on that project in late March and it should be completed by mid to late spring."

Median work at La Canada Drive will continue through the start of 2021. Improvements include reconfiguring left-turn lanes and raised medians.

Work on the RV Road traffic signal at Arrow Smith and Moore Loop is also in the works during the first months of the new year.

Oro Valley will also continue its pavement and seal coat improvements throughout several subdivisions, parking lots and Tangerine Road's multi-use path from Shannon Road to La Canada Drive. The town is also adding paved shoulders from West Lambert Lane Park to La Cholla Boulevard and the project is expected to be complete within the next six months.

Ride the Train: Local mayors support Amtrak’s proposal for a passenger rail connecting Tucson and Phoenix, as well as towns in between