When it comes to bread, Southern Arizona’s heritage grains are separating the wheat from the chaff 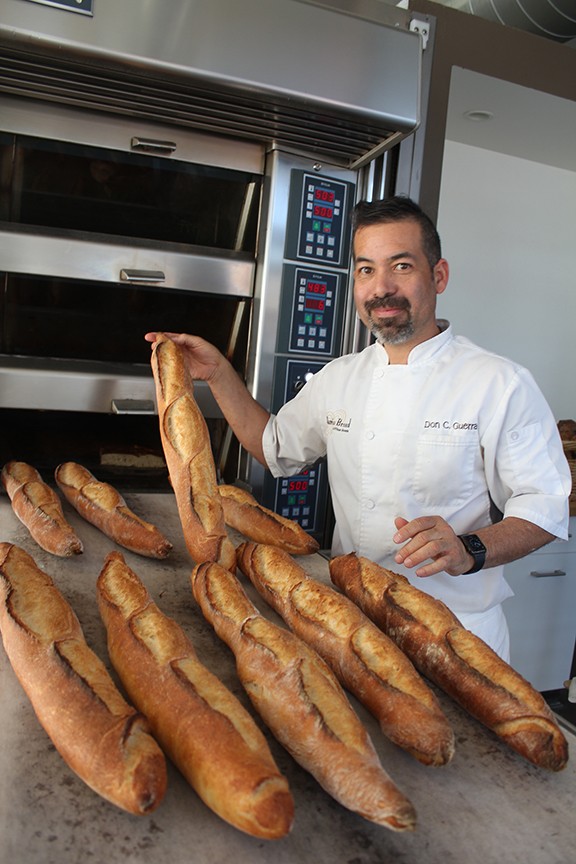 Lee Allen
Barrio Bread owner Don Guerra: “I want to replace some of today’s commodity flours and replace them with local grains.”
In a moment of basic candor renowned chef Julia Child once wondered, "How can a nation be called great if its bread tastes like Kleenex?"

Behind the rallying cry to "Get off the agrochemical treadmill," Tucson will celebrate a decade-long revival designed to bring healthy and better tasting grains and legumes back to Southern Arizona with a Heritage Grain Forum on Tuesday, Sept. 3, and Wednesday, Sept. 4, at the University of Arizona Haury Auditorium.

Some well-known names involved in that effort will be on hand to tell the story of grain revivals, their successes and where we go from here.

Headliners are Liz Carlisle and Bob Quinn, co-authors of Grain by Grain: A Quest to Revive Ancient Wheat, extolling the health virtues of ancient wheat as a solution to gluten sensitivity—not to mention that it just tastes better.

Quinn has made organic grains his life since 1983, involved primarily with Khorasan wheat, an ancient relative of durum that evolved into a product trademarked as Kamut.

Carlisle, who also authored Lentil Underground, lectures at Stanford University's School of Earth, Energy, and Environmental Sciences. She says: "Grain, particularly wheat, is one of the most industrialized and commoditized items in our food system, generally encountered in the form of white flour, and that's not good in a country where 20 percent of the population reports gluten intolerance. Industrial commodity wheat has been bred with a lot of air for high yield and it's something our stomachs don't like all that much. The positive response here is a revival of locally adapted and farmed grain varieties with reduced glutens and enhanced nutrition."

She adds that Tucson's long history with grains makes the city standout.

"Tucson is a hotbed for the regional grain revival movement, a City of Gastronomy with 4,000 years of continuous agriculture adapting crops to arid areas," she says.

Among the list of speakers is Don Guerra, owner of Barrio Bread, named by Dessert Professionals magazine as one of the Top Ten Bakers in America. The entrepreneur and artisanal baker is an environmentalist on a mission to build a local grain-based economy utilizing heritage/heirloom Sonoran white wheat introduced regionally by a Spanish priest in the 1600, the first variety of candela wheat to reach the desert borderlands.

Now baking 3,000 loaves a week, he still preaches the cause. "I want to replace some of today's commodity flours and substitute them with local grains, helping to develop, maintain and move that mission forward."

He calls working with bread "a passion." "It's organic in nature, always evolving, I'm just there to kind of give it a life form and help move a sustainable local grain economy forward."

Ramona and Terry Button (Pima and Lakota Indians, respectively) have been tending to as many as 7,000 acres in the Native community of Sacaton, heritage farming at the foot of the San Tan Mountains.

Ramona has been sowing heritage seeds since she was a little girl helping her father transform desert landscape into the family's first 10-acre plot where they grew edibles like corn, melons and squash along with Pima Club Wheat and ultimately became best known for saving a legume known as the bavi or tepary bean (thought to have gone extinct with the exception of a few seeds saved by her father).

Pima Club, another of the four varieties of wheat brought to the region by Franciscan priest Father Eusubio Kino, is a white wheat spring crop with soft kernels and chaff easily removed without the need for mechanical milling and grinding into flour. This variety came close to extirpation, but was rediscovered in an O'odham village and grown out for pinole, an ancient drink made of finely ground and toasted wheat or corn.

Among the other forum speakers is Jeff Zimmerman of Hayden Flour Mills, located on a century-old grain farm in Phoenix, and "devoted to making flavorful flours from some of the world's oldest varieties of wheat."

Hayden's hand-cultivated heritage grains include white Sonora wheat as well as Red Fife, Hard Red Spring and Golden Durum. The initial 2011 planting of 30 acres in Queen Creek has quadrupled and mills hundreds of pounds of local heritage flour each week.

Since 1983, when the founders of Native Seeds/SEARCH were told, "We're looking for the seeds of the foods our grandparents used to grow," they've been conserving arid-adapted crop diversity of the Southwest to support sustainable farming.

Native Seeds/SEARCH Executive Director Joy Hought says it's "hard to believe it was only 2012 when we were starting out with just a handful of this special wheat being grown in Arizona. But with our arid climate, it makes sense. Successes like Sonora white wheat are why we continue to conserve heritage seeds, not for nostalgia's sake, but because they can have a real impact on livelihoods for our state's farmers as well as provide superior flavor and nutrition to consumers."