On the Domestic Front: Emerge to host 18th annual Mother of the Year luncheon 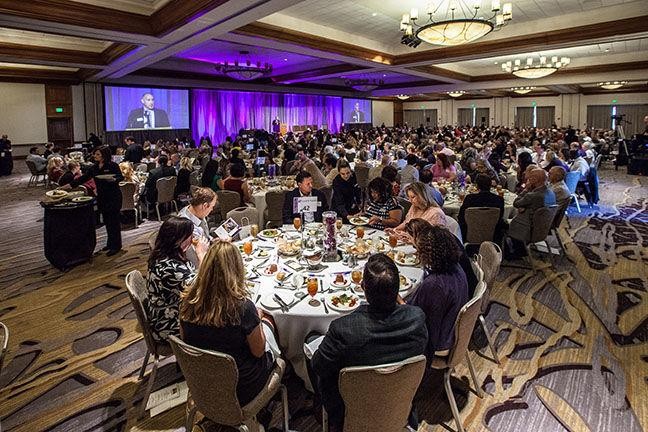 Courtesy
The struggle of women in domestic abuse situations will be highlighted at Emerge!’s annual luncheon.

For 18 years, Emerge! Center Against Domestic Abuse has hosted an annual luncheon to honor one woman as "Mother of the Year."

At this event, a mother who experienced domestic abuse will stand in front of hundreds and share her own personal story. The program will highlight what mothers who are in domestic violence situations do to protect their children and create safety for their family, and the great lengths they often strive for to make that happen.

Ed Mercurio-Sakwa, the CEO of Emerge, said they use the event to show the symbolism of one mother and her struggle, but it's representative of what all women and mothers have to do to try to protect children in a home with violence.

The event's keynote speaker, gender activist Wade A. Davis, will talk about the roots of domestic violence and how it shares the same roots as other forms of oppression such as homophobia and racism. A former NFL player, Davis now leads inclusion trainings for coaches and players to combat the culture of discrimination in sports.

In his TEDx talk from 2016, Davis spoke about what he calls the "mask of masculinity" which encourages young men and boys to value toughness and superiority over women.

Ending domestic abuse is not something Emerge, a nonprofit, by itself can just wave a magic wand and do, Mercurio-Sakwa said. It takes a certain level of community-wide awareness and commitment, which is what they are trying to accomplish with an event like Mother of the Year. He believes it's the only way to stop these stories from becoming a reality over and over again.

Therefore, the other major piece of the event is about fundraising and "how we get folks in mass to come together and become part of a collective effort to change social conditions that lead to domestic violence," Mercurio-Sakwa said.

To accomplish this, Emerge partners with corporate businesses, the criminal justice system, educational institutions, local law enforcement and other nonprofits engaged in related work. The message is a targeted one.

Chicanos Por La Causa, a multi-state nonprofit dedicated to Latino community development, partners with Emerge to engage young men and boys about the issue of healthy masculinity and reducing violence against women.

They will bring a table of 10 youth to the event on Friday, April 26 to hear this message about the roots of domestic abuse.

Mercurio-Sakwa said they cover this in classroom-based curriculum, but the Mother of the Year event is a more real-life connection to that lesson.

"Bringing them to this event allows those connections to be made," he said.

Emerge has been in existence for 43 years, and Mercurio-Sakwa has been with the organization for the last 10. He said intervention services have always been a main focus because they are critical for victims of abuse, but without prevention, the abuse will never end.

Their prevention approach has two layers: primary prevention through a program called men's education that deconstructs traditional ideas about masculinity and how it leads to violence against women. Some of the participants are court-ordered, while other participate voluntarily.

The second layer is to promote social change in the conditions that reinforce this harmful culture of masculinity. These can be seen in the workplace, school, sports teams, popular movies, social media and more.

"You might get a couple of individual men to change their belief system, but then they go right back into the same society and it just gets undone," Mercurio-Sakwa said. "We also have to change the overall conditions that these men live in every day."

Emerge has seen success in their approach. Mercurio-Sakwa said men do shift their behaviors when they can safely talk about their beliefs, while still being held accountable to their actions.

A focus on prevention through outreach to men has been in the works for years, but Mercurio-Sakwa said there was not enough energy behind it or resources available to do anything of substance until now.

"Even 10 years ago compared to now, domestic violence was much more of a taboo subject," he said. "It was not the focus of many media stories or things of that nature unless it was to report the tragedy of something."

He credits this to the belief that domestic violence is a private matter; it's between a couple in their private life. It wasn't something that was the public's issue.

"We're trying to blow up that whole concept that no, their details may be private, but the ability to have influence over this is actually a public thing," he said.

This could be as simple as offering help to a potential victim, whether they want it or not, or to go against the "bro code" and show men how to hold other men accountable to their actions.

Mercurio-Sakwa said this approach is not meant to suggest that all men are abusive, but a majority of domestic violence is male violence against women.

Emerge has also focused in on risk assessment to address the problem of finite resources intended to serve what seems to be an unlimited number of victims.

Emerge uses tools like APRAIS (Arizona Intimate Partner Risk Assessment Instrument System) to identify and prioritize the people at greatest risk of injury or death before it's too late.

"First and foremost we have to stop people from getting killed," Mercurio-Sakwa said.

Emerge serves about 6,000 victims and their children every year. Mercurio-Sakwa said that number has been increasing over the years, but that doesn't indicate that domestic violence is on the rise, but rather victims are becoming aware that there are resources they can use, and that they are comfortable enough to use them.

"This is one of the most underreported crimes that exist," he said. "Research shows that only about one in 10 incidents get reported. So we really don't have a clue how much domestic violence is happening."

In addition, many forms of domestic abuse are not illegal, Mercurio-Sakwa said. Verbal abuse, the use of financial control, isolation and other forms are not reportable. Many people who are abused in illegal ways are scared to call the police for a variety of reasons.

"It's massive," Mercurio-Sakwa said. "We don't even have a way to wrap our hands around the full extent of it, but we can do enough math to understand that it is a massive issue here in our community."

The number of people needing emergency shelter at Emerge is growing as well.

Mercurio-Sakwa believes that is indicative of other conditions like increased property and the scarcity of social resources. Emerge used to shelter about 500 or 600 people every year. That number jumped to 800 last year and they are now on the path to seeing about 900 people or more in their shelter.

It takes a substantial amount of money and resources to serve those 6,000 people every year, and Mercurio-Sakwa says they cannot do it without a financial investment from the community. This is a trend for most nonprofits.

"The community is going to have to make a decision about if this is important enough to invest at a level that expands resources available as more people come forward asking for those resources," he said.

Tickets for the Mother of the Year luncheon are on sale at emergecenter.org. Registration will open at 10:30 a.m. and the program will end at 1 p.m.