Old World in the New 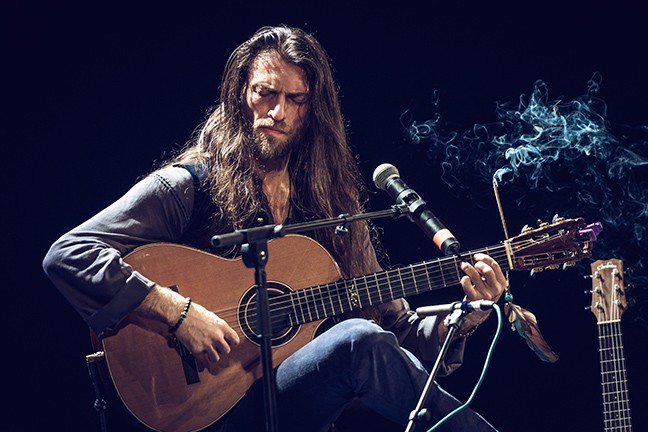 No matter the country, audiences understand Estas Tonne. His guitar playing is both ethereal and grounded, spiritual and human. Relentlessly playing his hypnotic acoustic style, Tonne grew from a street performer to a world traveler, now in the midst of his first U.S. tour.

Born in Ukraine but soon moving to Israel, Tonne's style has always been ephemeral. He was just 8 years old when he first picked up a guitar and he studied music with it for seven years. But he then took a decade-long break from guitar, because he "had to experience life and do something else."

When he picked the instrument back up, he found a new sense of passion and interest, particularly because had mostly forgotten how to play. But soon, he relearned, and that skill took him from performing street concerts to performing professionally across the world.

"It has been a big chapter in my life." Tonne says. "These days are a completely different experience."

Tonne's music draws from old gypsy and classical roots, certainly in dexterity and precision, but also contains the softness of impressionism and New Age music. This blending of styles accrued him YouTube fame, where his songs have been listened to ten of millions of times.

Now frequently touring, the self-titled troubadour still occasionally thinks back on his life as a street performer. Tonne views his former life versus his current life as a world-renowned performer as similar to a chicken and an egg, saying when a baby chicken comes out of the egg, it can never be put back in.

"I see the difference in my playing every day," Tonne says. "It's almost like it goes on with or without the instrument. You can be quite surprised at how things have changed."

Tonne's most acclaimed album, 2013's Internal Flight, consists of a single, hour-long song. The meditative-yet-epic track shows every facet of Tonne as a guitarist. Multiple genres blend together with only a few acoustic strings: minimalism, flamenco, ambient, classical, and even bits of new age.

"This musical experience somehow naturally occurred during my travels all over the planet in 2012 while feeling the call to 'stretch' and extend already existing songs, improvising with the intensity of sound," Tonne says. "During enormous amounts of sessions, which range from one hour to five hours I've seen and felt an incredible magic... I still have no idea what I do during these sessions."

The album cover, depicting a blindfolded Tonne looking almost uncannily like Jesus, is a perfect representation of his music: introspective, spiritual and unguided. His fingers glide up and down musical scales, playing with space, volume and expectations. The strings reverberate from the left to right channels; the looping arpeggios grow and vanish into each other; the music lingers like incense smoke. He can seemingly do anything with a guitar.

"In the current state of my expression, for two hours, there is no interruption, there is no break in the sound." Tonne says. "There's no going in and out of it. Sometimes I don't even look at people. I guess it's very similar to meditation."

Tonne's live performances can be even more enthralling. Used to crowds from his time as a street performer, Tonne's musicianship forms a commanding hold on audiences. But aside from the music itself, it's always impressive to see someone play long sets of complex stringwork without diminishing power.

"It may be physically exhausting on occasion, but never mentally." Tonne says. "I'm in love with what I do."

Tonne is proof of how one person and one instrument can tell an endless amount of stories without ever having to say a word.