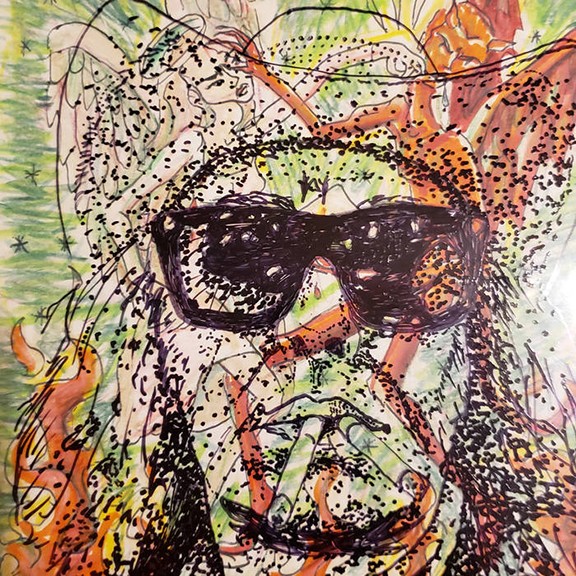 Courtesy photo
The cover of Songs I Hate to Sing.

Hank Topless makes this declaration between bites of his pollo asado taco at Taqueria Pico de Gallo on Tucson's southside. The introspective, yet cocksure country musician's new album, Songs I Hate To Sing, captures the sound of country music made between the dawn of the atomic age and Walter Cronkite reporting the last huey leaving Saigon.

"I like songs that can be seen through the prism of dark humor," said Topless, while wiping a dime-sized drop of salsa verde from the right corner of his mouth.

The collection of somewhat obscure country covers, mixed with a few of Topless' originals, features songs like Leon Payne's classic "Psycho"—about a psychotic man confessing his sins to his mother—and the obscure 1974 Margie Singleton country-gospel number "Jesus Is My Pusher."

Topless says he remembers hearing these songs as an "8-year-old with a Brian Jones bowl cut" while on his daily hour-long school bus ride through the rural outskirts of Payson, Arizona. Before his family moved from Tucson to Gila County in the early '70s, Topless said the only music he knew other than his dad's rock and roll LPs was whatever children's records his mom picked up at the local store.

To Topless, the golden age of country music allowed songwriters the freedom to explore the dark side of life while still getting airtime on conservative country radio stations of the 1950s through the '70s.

"It's a three-minute song with a toe-tapping rhythm AND it's about suicide, it's about murder, it's about drinking yourself to death," Topless said. "So many times they deal with real thoughts, with a life I can relate to."

Topless uses the late 1950s upbeat yet dark Buddy Knox tune "I Think I'm Gonna Kill Myself" (which he also covers on this album) to illustrate his point.

"When you press play, it sounds like Pat Boone and you think, 'How is this going to be about suicide?'" Topless said. "It sounds like he's going to a sock hop, but then he starts singing about how he's gonna kill himself. He didn't though—Buddy Knox lived until he was 95—so, I guess he got better."

The vision for the album started around 2016 as a collection of original music with a full band featuring Freddy Parish and Loren Dircks, said Topless. However, due to some family tragedies and personal issues, "it wasn't happening,'' he said. By May 2019, Topless returned to the studio with a new band and a new approach to the project.

"The idea was to record a group of songs that really stuck in my head," Topless said. "Fuck it, I'll do some covers and hold the other songs I wrote for future albums."

With that, Topless recruited seasoned musicians like drummer Marx Loeb, pianist T.S. Henry Webb, bassist Evan Dain and guitarist J. Clay Koweek, among others. He said he wanted to use musicians he felt "had a specific purpose" and could help capture the sound he was going for.

Regional alt-country favorites Miss Lana Rebel and Kevin Michael Mayfield also sang and played guitar on Topless' latest effort. Rebel said it was unlike any studio experience she has ever had since they only had a short time to prepare for each song before recording.

"We just put our noses to the grindstone and made something nice for (Topless)," Rebel said. "It was tough, but I liked that it was a challenge for me."

Her partner, Kevin Mayfield, also said recording with Topless was challenging, yet a positive experience. He played lead guitar on multiple songs on Songs I Hate To Sing.

"(Topless) didn't really want us to know the songs to a T. He wanted us to improvise a bit," Mayfield said. "That was a little bit stressful but it wasn't anything I couldn't handle."

They've both known Topless for years, personally and professionally. The duo said they were "truly honored" when he asked them to play on the album because he's known for recruiting some of the best musicians around the state."

"I love him and I love his music so much." Rebel said. "He really appreciated our individual styles and felt he could get the sound he wanted by putting us all together."

You can download Songs I Hate to Sing and Topless' whole discography at www.hanktoplessmusic.com.