The Weekly is happy to bring the third annual OIL edition to its readers, celebrating July 10—710, which is OIL upside-down—and the cannabis extractions that have created a vibrant marketplace both for medical patients and adult-users of legal weed in Arizona.

Broadly defined, oil is any product derived from cannabis flower processed into a concentrated form that can be used for a variety of purposes, including shatter, wax, crumble, hash and other distillates.

There are similar CBD oils that are non-intoxicating and used to treat a variety of medical conditions, generally sold as tinctures, lotions or in capsule form or in smokable cartridges.

THC oils are intoxicating oils used medically or recreationally for their euphoric effects. THC-infused oils are found in solids that can be vaporized (dabs), smokable cartridges, tinctures, various edibles and capsules.

Vaporizer cartridges are a popular use of oils and are similar to e-cigs, but with pot instead.

With further processing (called Decarboxylation, which essentially allows the THC and other compounds to be absorbed into your liver—you can also create ingestible oils to infuse food and drinks, or simply place in capsules for those who don't want to eat infused products. 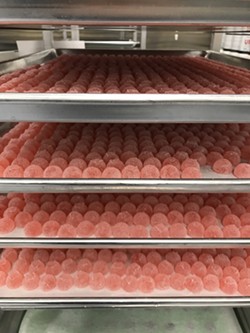 As the science behind the processes improves, more options are coming onto the market that can treat specific medical symptoms or provide various types of highs for the adult recreational user.

"In the future, we'll see more condition-specific product," Downtown and D2 Dispensary owner Moe Asnani predicted on a recent afternoon as a monsoon brewed above his Tucson facility. "Our product are becoming more sophisticated every day."

Asnani is also co-founder of iLava, a product line that draws heavily on processed cannabis and is driven by state-of-the-art research and development so he stays on the cutting edge of the latest developments in the industry.

Claire Levenberg, R&D manager for iLAVA and iLAVAHEMP and also the director of science operations for the Downtown and D2, has strong beliefs about the ability of science to drive future markets and create more options for the consumer—and make the world a better place.

"What we're going to see is product with more cannabinoids and the 'entourage effect,'" Levenberg said.

The entourage effect is a theory that various cannabis compounds work together to create unique effects and benefits. There are more than 550 identified chemical compounds in cannabis, with more than 100 phytocannabinoids identified, including Delta-9-tetrahydrocannabinol (THC) and cannabidiol (CBD). There are also more than 100 aromatic terpenes that work in concert with other compounds to create therapeutic compounds for numerous medical conditions, such as pain, anxiety, epilepsy, nausea and vomiting, and post-traumatic stress disorder.

"Not only does the combination of cannabinoids and phytocompounds allow the consumer's metabolic processes to function based on metabolites present, the combination of multiple cannabinoids will synergistically interact to provide more benefits," Levenberg said, adding that different combinations can create specific reactions to treat a wider array of people, as cannabis affects everyone differently.

"We're highly in tune with the extraction process," Levenberg said. "It's an absolute science, so consumers should leave it to the manufacturers who know what they're doing, so don't do this at home." 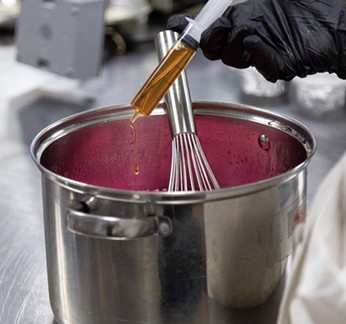 One of the most popular uses of extracts is in the manufacture of edibles. Your run-of-the-mill gummy can either have cannabis oil added to the recipe or sprayed on, a much cheaper process that does not infuse cannabis throughout the product.

Copia, an Arizona-based edibles manufacturer, uses the former method to ensure accurate dosage and create a better tasting product for its OGeez brand gummies that are infused and made from scratch.

"Infusion creates better taste and evenly distributes THC in the product to create accurately dosed gummies," Copia's director of operations Aron Ruben said. "Some companies buy gummies and spray distillate on them. It's cost effective—read: cheap—but you don't know how much that product has been dosed."

Ruben added that sprayed-on distillate can also sweat off the gummies in transit, further reducing the accuracy of the dose, so "you might as well lick the inside of the packaging."

"Everyone has a horror story about being misdosed," he said. "Cannabis is not a one-size-fits-all proposition: We all receive THC differently, so it's important to have consistency."

Besides targeted treatment and dosage control, another advantage to the industry is reducing waste, as processing the cannabis leftovers—stems, shake and cuttings that are not sellable as flower—into usable components can add value to every crop, a phenomenon known as "garbage to gold."

"The whole industry found a way to use the trim and found you could extract THC and terpenes," Ruben said. "The days of throwing an ounce of weed in a stick of butter are over."

Transporting product is easier too, as processing weed into distillates creates higher potency in a smaller package, as most flower available in the local pot shop has a potency between 10% to 30%, while concentrates can have as much as 90% potency.

Ruben said Copia is set to expand the OGeez line to include "RSO," or Rick Simpson's Oil, a full-spectrum crude oil used to treat debilitating conditions such as cancer, Parkinson's and severe body pains that is 75% to 80% THC.

"I'm excited for the future," Ruben said. "There are a fair amount of distillate products in the state and cultivators are selling better quality weed to extraction labs, for better distillates."

Why we celebrate OIL

In July 2019, the Weekly recognized the Arizona Supreme Court case that clarified the definition of "marijuana" in legislation to include all parts of, and resins extracted from, the plant.

The May 2019 decision came as a result of the case of Rodney Jones, who was arrested in 2013 at a Prescott hotel and charged with possession of cannabis and drug paraphernalia. Police alleged that Jones also had 1.4 grams of hashish in his possession, according to contemporaneous reports.

The Arizona Court of Appeals agreed with Polk and ruled in the summer of 2018 that the law did not specifically mention hashish, and if that was the intent of the law, it should have been written that way.

But in a unanimous decision the following year, the Arizona Supreme Court overturned the ruling, concluding that patient protections in the AMMA covered products made with resins extracted from the plant.

"It is implausible that voters intended to allow patients with these conditions to use marijuana only if they could consume it in dried-leaf/flower form," the Court wrote. "Such an interpretation would preclude the use of marijuana as an option for those for whom smoking or consuming those parts of the marijuana plants would be ineffective or impossible."

The court stated that its interpretation of the law would allow medical patients to treat their conditions with whatever form of pot served their needs the best.

Jones, a medical marijuana card holder whose conviction and sentence were dropped and sealed in the wake of the lawsuit, spent more than two years in jail that he will not get back. His case served as an important milestone in cannabis legislation though, forcing lawmakers to more fully recognize the will of the people.

While we appreciate the legal processes and celebrate the exoneration of Jones, cannabis oil in its various forms has become a boon to consumers and producers alike.