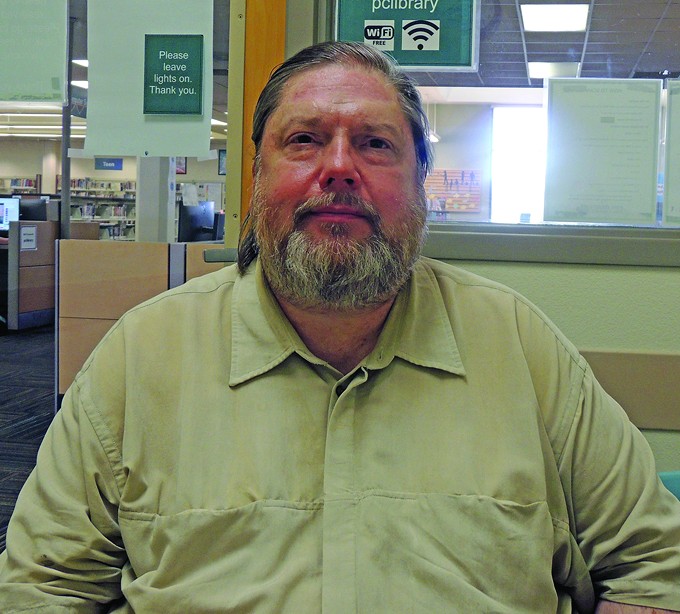 (Photo by Hope Peters)
A participant of the SNAP program, Bruce Cole was shocked to find out his EBT card benefits had expired with no prior notice from AZDES.

Arizona EBT cardholders were dismayed to reach the grocery store register last month and find out their SNAP funds had expired without notice.

“It is chaos not being advised or notified that your EBT expired,” Bruce Cole said regarding his expired card.

Cole, who does not work due to disability, said he is grateful for the help he receives from AZDES and the SNAP program, however, participants in his same condition rely heavily on their EBT cards to feed themselves and their families.

He said he found out his EBT card had expired when he called AZDES to change his PIN on his card in the last week of June.

“The automated phone system just said, ‘your benefits expired’,” he explained. He called four times and received an automated message that stated the system is down and to call back later.

Cole said the message AZDES told SNAP clients their EBT cards expired due to a “vendor issue.” However, they were not getting notified to reapply for SNAP benefits.

AZDES explained what had happened in June this year.

“As a separate issue, the vendor through which the state of Arizona prints and mails correspondence and paper checks experienced a cyberattack in June, resulting in the company taking their systems offline nationwide,” AZDES Press Secretary Tasya C. Peterson said in a statement to Tucson Local Media.

“The outage affected the work of four state agencies, including DES and various programs including the Supplemental Nutrition Assistance Program (SNAP), among others,” she said in a statement. “During the outage, DES updated its website and call center messaging to help inform staff about the incident and its impacts.”

AZDES stated that the vendor resumed operations in Arizona over the Independence Day weekend, and it has worked with the State to process delayed notices, forms and paper checks.

She said, “All delayed correspondence have since been processed. DES clients did not experience a lapse in SNAP benefits or eligibility as a result of the June outage.”

“All DES clients will receive the benefits for which they are eligible,” she said.

AZDES said they are extending timelines for those who didn’t receive notices. “Their July benefits should now be available,” they added.

However, according to Cole, several days later on July 14, he witnessed people abandoning their cards at his local Safeway grocery store.

He said he saw a woman try to pay for groceries and the chashier told her she had no available funds on her card.

Pandemic emergency SNAP funds ran out in April, according to Cole.

This, coupled with delayed DES notices, confounded cardholders suffering from the rising cost of food.

Cole said an organization called La Frontera has been getting emergency food boxes to people, “which has been an incredible help.”

“How does a person who has no income, has a disability, how do they get help?” Cole said.

Cole said if your EBT card has no funds and you didn’t receive a notice from DES, you have no alternative.

“What do you do for money?” he asked.

Cole said he managed to buy his groceries on a limited budget with different options, more than just coupons and discounts.

Cole signed up for every free membership card at his local grocery stores such as Albertson’s, Fry’s and Safeway.

The stores offer points on purchased items, except alcohol and tobacco.

The points can be used for savings on gas. Cole said he has no vehicle so he uses the points for discount on grocery items.

For SNAP clients, AZDES had this to say:

“When a Nutrition Assistance client is reaching their date of expiration, a notice is issued the month before the expiration date. Clients can also check their case status online at MyFamilyBenefits.azdes.gov. In May, there was an isolated incident that impacted the distribution of some notices. In instances where cases may have been directly impacted by the incident, we have taken steps to extend timelines for benefits, as well as for actions a client would need to take on their case.”